46% view Suga as most suitable choice for Japan’s next prime minister, Yomiuri poll 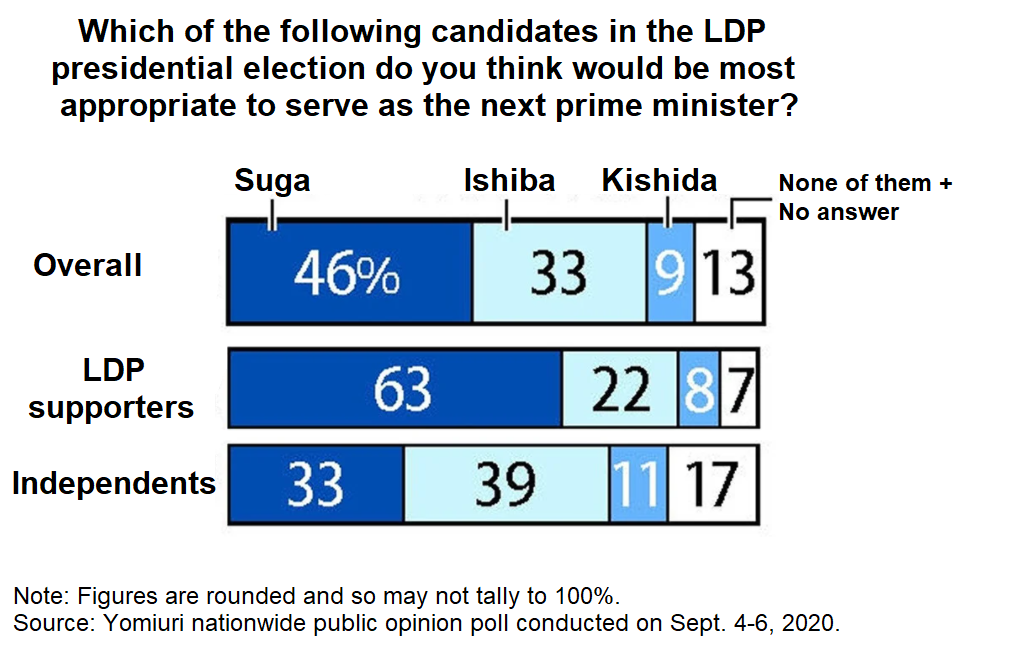 Of the three men who have announced they will run in the upcoming election for president of the Liberal Democratic Party, Chief Cabinet Secretary Yoshihide Suga is seen as the most suitable candidate to be the next prime minister, according to a recent survey by The Yomiuri Shimbun.

In the survey, 46% chose Suga as the most appropriate person, followed by former LDP Secretary General Shigeru Ishiba at 33% and LDP Policy Research Council Chairman Fumio Kishida at 9%. The nationwide survey was conducted from Sept. 4 to 6.

Among respondents who support no particular party, 39% favored Ishiba as the new prime minister, 33% picked Suga and 11% were for Kishida.

The LDP presidential election will be decided by a vote of LDP Diet members and representatives of each prefectural chapter, instead of a nationwide vote among rank-and-file party members. Asked whether this method of selection was appropriate, 59% of respondents said it was “not appropriate” while 34% said it was.

Regarding the economic policies implemented by outgoing Prime Minister Shinzo Abe, 51% said the new prime minister should maintain the policies. As to Abe’s diplomacy and security policies, 66% said they should continue under his successor.

Asked about the establishment of a new party through the planned merger of the opposition Constitutional Democratic Party of Japan and the Democratic Party For the People, in which some independent politicians will also participate, 36% said they had expectations for the new party and 58% said they did not.

Asked about the dissolution of the House of Representatives for a snap general election, 55% responded that this was “not necessary until the expiration of the terms of office” of lower house members. That represented a 15-point increase from a July survey that included the same question.

[Polling methodology: The nationwide survey was conducted on Sept. 4–6, 2020, on a computer-aided random digit dialing (RDD) basis and targeted voters aged 18 or over with calls placed to landline and mobile phone numbers. Valid responses were received from a total of 1,078 persons, including 535 persons (out of the 888 households with one or more eligible voters) for landline numbers and 543 persons (out of the 1,204 persons who answered) for mobile numbers. The valid response rates were 60% for landline numbers and 45% for mobile numbers. Figures are rounded off. In some graphs and charts, the total percentage may not add up to 100%. “0” indicates that the figure was below 0.5%, and “–” denotes that no respondents gave that answer.]