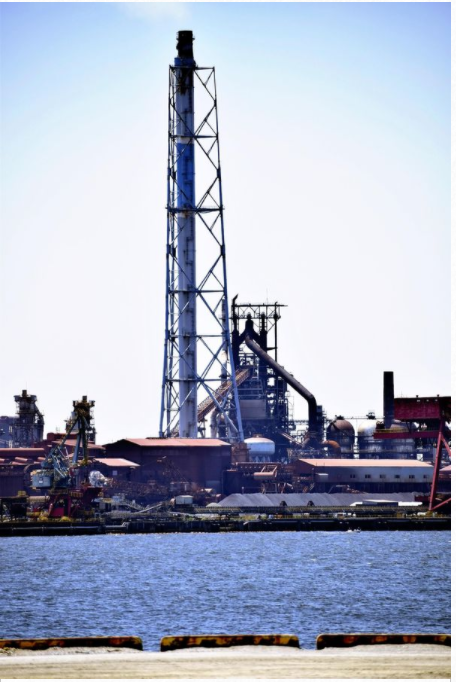 The steel industry, which was once touted as “embodying Japan,” is suffering greatly. The novel coronavirus pandemic has battered the industry even as it was already facing adversity in the form of aggressive efforts on the part of Chinese manufacturers, aging facilities and sluggish domestic demand. Can this industry that has been a pillar supporting Japan’s economic growth ever regain the glory of its heyday?

“The situation is a lot tougher than we expected in February. Major structural measures are now inevitable, and we have already begun studying their implementation,” Nippon Steel Corp. President Eiji Hashimoto said on Sept. 1.

Speaking about the environment surrounding the steel industry, Hashimoto expressed his awareness that the company will have no choice but to downsize its production bases.

In February, Nippon Steel decided to close its Setouchi Works’ Kure Area in Kure, Hiroshima Prefecture, by around September 2023.

Built on the site of the Kure Naval Dockyard, where the battleship Yamato was constructed, the plant has been in operation for nearly 70 years, since 1951.

Including those employed by subcontractors, about 3,300 people work there. Nippon Steel has indicated it will keep them employed, but has yet to hold specific discussions on the matter with the parties concerned.

The HelloWork public job placement office in the city has received more than 500 consultations since February. Comments from concerned job seekers included: “My life is based in Kure. I just can’t deal that easily with a relocation.”

At the end of July, residents and businesspeople based in Kure submitted about 52,000 signatures to Nippon Steel to demand the withdrawal of the plant’s planned closure.

Kure Mayor Yoshiake Shinhara has also called for the steelmaker to more proactively provide relevant information, saying, “The lack of information is one of the reasons why the people in Kure are so concerned.”

If each steel company embarks on additional structural reforms, a similar development will likely unfold across the country.

The steel industry had been struggling even before the virus outbreak. This was due to the aging of its production facilities and the rapid advance of Chinese companies.

While maintaining these facilities requires enormous costs, Japanese steelmakers’ share of the global market, which was once nearly 20%, has fallen to around 5%.

Now with the pandemic, the situation has become even more difficult. Many automakers, which are the main clients of the steel industry, have reduced the production of new vehicles, forcing the steelmakers to cut back on their production as well.

Blast furnaces are used to heat iron ore and extract molten iron. Iron ore and coal are alternately stacked in a bottle-shaped furnace, and hot air of more than 2000 C is fed into the furnace from below. There are 25 blast furnaces in the nation.

The company initially planned to maintain production at the vast Kimitsu plant, but due to a larger-than-expected drop in demand, it was forced to temporarily suspend production at the plant for the first time in 11 years.

Kobe Steel, Ltd. owns only two blast furnaces at its Kakogawa Works in Hyogo Prefecture, so it did not temporarily suspend them, but instead responded to the situation mainly by reducing the amount of iron ore input.

Once the operation of a blast furnace is halted, it takes several months to raise the internal temperature to resume production. Therefore, the furnaces are operated without interruption, in principle, except when they are undergoing regular inspections.

Nevertheless, Nippon Steel and JFE decided to suspend some of their blast furnaces because steel demand plunged so suddenly.

“As long as we keep on having the blast furnaces operate, inventories will only continue to increase in stock. We didn’t have enough time to carefully examine our decision,” said an executive at Nippon Steel.

Domestic crude steel production has been hovering around 100 million tons per year for the past 10 years or so and looks set to fall sharply in 2020 due to a series of temporary suspensions of blast furnaces.

The decline in production is directly linked to the deteriorating business performance of steel companies. The three major steelmakers — Nippon Steel, JFE and Kobe Steel — expect their operating profit to be significantly in the red in fiscal 2020.

In fact, the implications of reorganizing and consolidating production bases has been heard repeatedly from some management officials at these companies.

“Although the auto industry is recovering, the shipbuilding and construction businesses are still weak,” said JFE President Koji Kakigi. “We will proceed with reviewing our operations without giving sanctuary [to unprofitable businesses], so that we can return to profitability [in fiscal 2021] under any circumstances.”

The lives of about 220,000 workers in the steel industry are being shaken.

The steel industry played a central role in Japan’s postwar business sector as well as in regional communities. It still maintains a certain presence in the business world, but its prestige is waning.

The predecessor of Nippon Steel produced three chairmen of the Japan Business Federation (Keidanren) — the post dubbed “the prime minister of the business world.”

In the 1980s, Yoshihiro Inayama and Eishiro Saito successively assumed the Keidanren chairmanship, and with them the industry rose to prominence.

However, it has been further from the top position since the retirement of Takashi Imai in 2002.

Its contribution to regional economies has also declined.

Nippon Steel’s Kamaishi Area in Iwate Prefecture employed about 8,000 people in 1960, but the blast furnace was shut down in 1989, and now only about 250 people work there.