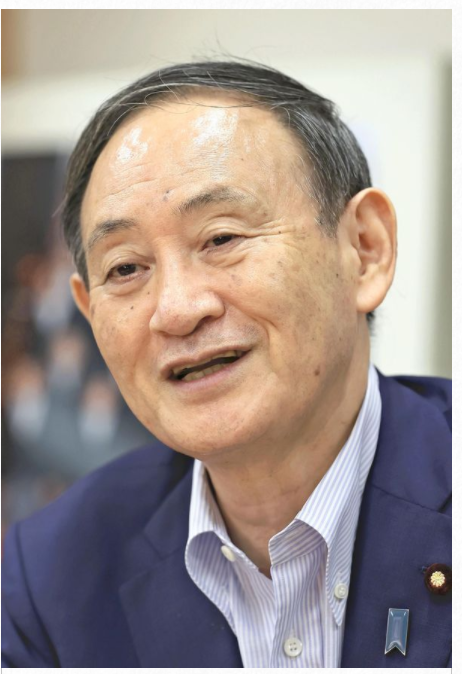 Chief Cabinet Secretary Yoshihide Suga, currently the leading candidate to become the next president of the Liberal Democratic Party, expressed his desire to reorganize the Health, Labor and Welfare Ministry in a recent interview with The Yomiuri Shimbun.

Suga, 71, also revealed his intention to create a tentatively named “Digital Agency” to promote the digitization of government administration.

“The Health, Labor and Welfare Ministry has an overwhelmingly large budget and has had pension problems in the past,” Suga said Sunday. “The new coronavirus is also a major problem that the ministry can’t handle alone. As soon as the virus is under control, we will examine [the organizational structure of the ministry].”

The health ministry is solely responsible for social security policy, and has been tasked with reducing the workload of its employees. Within the LDP, there have been calls for the ministry to be divided into a welfare body and a labor body.

Regarding the conspicuous lag in the digitization of government administration, Suga said: “Digital policies are spread across various ministries and agencies. It’s necessary to consolidate those policies into a single entity.”

The Digital Agency is reportedly being envisioned as an organization that will unify the digital policies of each ministry and agency.

Suga indicated that he will consider additional economic measures to counter the novel coronavirus. He stressed, “We want to protect jobs and maintain conditions under which business can continue,” to ensure that socio-economic activities are balanced with preventing the spread of the disease.

Regarding Chinese President Xi Jinping’s visit to Japan as a state guest, Suga said:“Japan should prioritize measures to deal with the novel coronavirus. It is not yet time to decide on a schedule.”

With regard to an early dissolution of the House of Representatives and a general election, he said: “We will consider that after the presidential election is over.

I think the people are saying that they want the government to properly deal with the new coronavirus.”

“I decided to run [for president of the LDP] with the determination to somehow manage to change the current situation,” Suga said, expressing his strong intention to implement administrative reforms. “The important thing is to accomplish this.”

For a while, Suga has been motivated by a desire to reform the administrative structure. In 2018, when the LDP’s Headquarters for Promoting Administrative Reform came up with a proposal to reorganize ministries and agencies, including splitting up the Health, Labor and Welfare Ministry, Suga was reported as saying, “It’s necessary to respond to the demands of the times.”

In the collection of policies he released Saturday ahead of the presidential race, “Revitalizing Japan can never be achieved without demolishing the vertical divisions of ministries and agencies” is clearly stated.

An official in his camp is hopeful that the new administration led by Suga “will be able to continue the policies in line with the current administration while emphasizing his individuality.”

However, Suga has yet to fully take action to carry out administrative reforms. As chief cabinet secretary, he has worked hard in such areas as promoting the furusato nozei system, a tax-deductible donation program to support the revitalization of regional communities; making Japan a tourist destination as a means of boosting consumption; and expanding the employment of foreign workers to help alleviate the labor shortage.

In particular, Suga is proud of his efforts to increase the number of inbound visitors to Japan as his “greatest achievement.” Visitor numbers reached 20 million in 2016 and 30 million in 2018 as a result of such measures as relaxing conditions for issuing visas.

“The Justice Ministry and the National Police Agency [which were concerned over a deterioration of public safety] were completely against it, but with political leadership, we put it together,” Suga said in a speech in 2018, referring to the easing of visa requirements. “As soon as the visa requirements were eased, the number of foreign tourists easily began to grow from the following month.”