TOKYO — Japan’s regional cities are taking a new approach to smart cities, which use digital technology to improve functionality and livability.

Data is the lifeblood of smart cities, and new standards are developing in how data is handled.

Japan’s leading smart city is being built in the city of Aizuwakamatsu in Fukushima Prefecture, a region famous for its sake and samurai tradition. At Takeda General Hospital, a male patient was using his smartphone to pay for his bill. The payment system is a trial for using QR codes in electronic payments. “We want to make things more convenient by using QR codes; not just for paying hospital bills, but also for taxes, transportation and regular purchases,” said Keisuke Kobayashi of TIS, the company that developed the system. About 20 companies are collaborating on smart cities in this facility in Japan’s northeastern city of Aizuwakamatsu.

Other companies are also hard at work in Aizuwakamatsu, enhancing mobility, education, energy, agriculture and manufacturing. These include NEC, Toppan Printing, Coca-Cola, SoftBank Group and Mitsubishi, all of which are collaborating under one roof at the AiCT innovation center.

With a population of only 120,000, Aizuwakamatsu is a surprise as a leader of urban development. This can be attributed to its unique development model, in which residents choose if they want to provide personal information in exchange for smart services. “Unless you have an ‘opt-in’ model, in which each service is expressly given permission to collect personal data, you won’t be able to gain trust,” said Shojiro Nakamura of consultancy Accenture, which oversees the project. “Without the residents’ trust, smart urban developments will fail.”

The city is working to win over residents by clearly stating the benefits of opting in. To increase transparency and assure people that personal information will not be misused, data management will be overseen by the community.

This year, for example, an idea was floated to install sensors in the parking lot of a local tourist attraction to determine if there might be a way to increase its appeal. But the city nixed the sensors, saying the technology might make residents nervous.

Still, about 20% have registered for some kind of smart service. This is expected to rise to 30% by the end of fiscal 2020.

“It’s important that we deepen our understanding of smart cities,” said Nakamura. When registration reaches 50%, the city will allow residents to opt in for all services as a bundle, rather than one by one. When it reaches 70%, the system will be considered to have gained residents’ trust and will share personal data by default. But residents can still opt out of the arrangement. The reason for the caution is that sloppy handling of personal information is causing problems for smart cities in the U.S. and China.

In May this year, a Google group company in Toronto announced that it would withdraw from a smart-city project there. The company blamed growing uncertainty caused by the coronavirus pandemic and privacy concerns from residents, who described the project as a surveillance society “dystopia” and citizens as “lab rats” over fears personal information could be gathered and misused.

In China, Alibaba Group Holding, Tencent Holdings, Baidu and other companies are participating in the government-led planning of more than 100 smart cities. The government has already proposed international standards for smart cities to the International Organization for Standardization, but many Chinese are wary over the government’s centralized data management.

Japan aims to take a more transparent approach to handling personal data. In May, the government amended a law to expand smart cities characterized by “open access.” 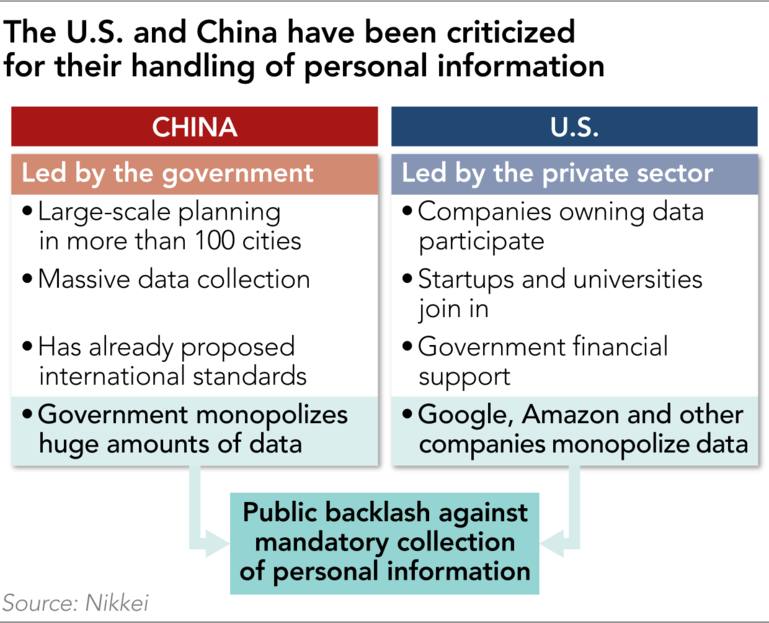 By standardizing the urban operating system — the basic software for smart cities — multiple cities can be connected to data infrastructure that collects and organizes information. This eliminates the need for each city to build its own infrastructure from scratch, making it easier for less-developed cities to transition to smart cities. As more cities become connected, greater amounts of data can be gathered, enabling better and more targeted services.

Accenture will introduce the urban operating system developed in Aizuwakamatsu to the city of Kashihara in Nara Prefecture, and may launch it in other cities. Toyota Motor and NTT are planning a smart city called “Woven City” for the city of Susono in Shizuoka Prefecture. “It seems Woven City is also looking to work with other cities by providing connectivity among systems,” said Toru Hyakushima, a researcher at NLI Research Institute.

According to a study by U.S.-based IDC, global spending on smart-city technology will climb to 13 trillion yen ($122.7 billion) in 2020, rising to 20 trillion yen in 2023. Japan’s open strategy aims to make it easier to implement international standards in urban planning. If the model becomes a global standard, Japanese smart-city services would be an easy sell to the rest of the world.

“Japan faces daunting social issues, such as a declining birthrate, aging population and frequent natural disasters,” said NLI Research’s Hyakushima. “If a series of groundbreaking services that help solve these issues is developed from smart cities here, Japan may catch up to the U.S. and China.”