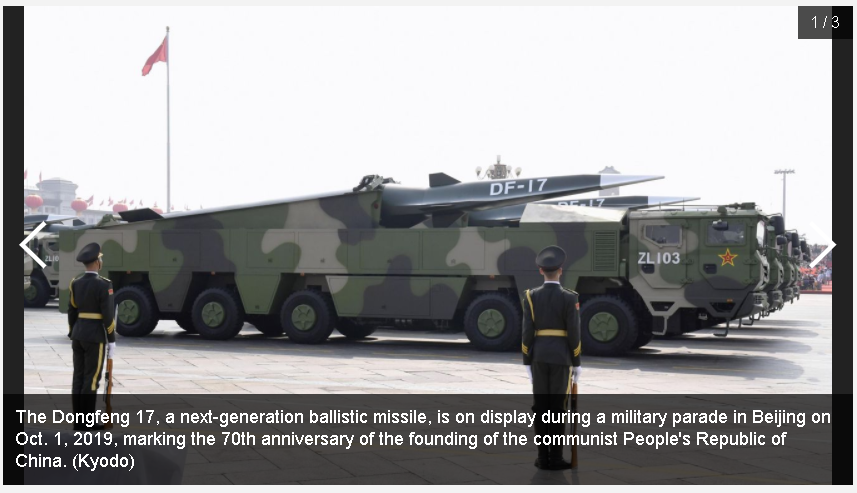 TOKYO — As Japan considers updating its missile defense policy, including a proposal to approve enemy base strike capabilities to deter attacks, experts warn such a decision could raise tensions in East Asia and backfire on the country itself.

The ruling Liberal Democratic Party last month proposed that Japan consider “possession of the ability to intercept ballistic and other missiles even in the territory of an opponent,” a controversial suggestion in light of Japan’s war-renouncing Constitution and its exclusively defense-oriented policy.

Prime Minister Shinzo Abe is expected to call for deepening discussion of the proposal before he steps down later this month, and Yoshihide Suga, Abe’s right-hand man and frontrunner in the race to succeed him as LDP president and the country’s premier, is almost certain to follow Abe’s position.

“This kind of discussion is inevitable given recent military expansions in China and North Korea,” said Takeshi Yuzawa, a professor of international relations of East Asia at Hosei University. But he also said Japan needs “to carefully examine the scope of its military acquisitions in the light of the effectiveness of its overall deterrence strategy.”

“Chinese armaments are mainly focused on the United States. But if Tokyo acquires capabilities to attack enemy bases, Beijing might more aggressively strengthen its offensive capabilities targeting Japan, depending on its new capability,” Yuzawa said.

He warned this may drag Japan “into a dangerous arms race with China that will eventually force Japan to consider the acquisition of offensive weapons that go beyond its financial capacity, let alone its constitutional limitations.”

The discussion on whether to have strike capabilities coincided with the government working on an alternative to a costly U.S.-developed missile defense system.

The planned deployment of the Aegis Ashore system, aimed at protecting Japan from North Korea’s missile threat, was scrapped in June. Japan has briefed the United States, its main security ally, on alternative options, according to Japanese officials.

The attempts by countries such as China, Russia and North Korea to develop new weapons that can break through conventional missile defense systems have also caused a twist to the discussion.

Such weapons employ technologies that enable armaments to glide faster and lower than usual ballistic missiles, which makes it even harder to intercept them.

If Japan wants to have strike capabilities, it needs to strengthen not only long-range missiles but also detection capabilities, said Chikako Kawakatsu Ueki, a professor of international relations and security of East Asia at Waseda University.

“Other countries would strengthen their capacities to counter Japan’s move, and East Asia would have to seek a (military) balance in a state of higher tensions,” Ueki said.

“Japan should continue to focus on developing missile defense systems (rather than acquiring strike capabilities),” she said. “In addition to the United States, it is important for Japan to cooperate with South Korea, Australia and other countries to create a defense-dominant world where attacks are not worth the cost.”

The proposal by the ruling party to Abe followed similar suggestions in the past that were never adopted in the government’s defense strategy, apparently considering negative reactions from the public.

But this time, Abe is widely expected to find some way for the proposal to be discussed in more detail.

“The state’s mission is to protect the lives of people and their peace,” he said when receiving the latest proposal. “To that end, I’d like to deepen discussions on what we should do.”