SAPPORO, Japan — He has come a long way from Dhaka, but Mohammed Julkarnaine, a 32-year-old from Bangladesh who moved to this northern Japanese city to work in software development, seems happy to call it home.

“I’ve been able to work in artificial intelligence,” he said. “And I haven’t seen any crime.”

Information technology engineers like Julkarnaine, now in high demand amid a global battle for talent, have played a major role in the recent rise in Sapporo’s population of foreign nationals — the third-fastest among Japan’s 20 major cities.

Bangladesh is a significant contributor to this pool of talent.

Home to a little more than a tenth of the population of neighbor India, the country punches above its weight when it comes to IT, with about half of the 500,000 university students who graduate there each year going into the field. Bangladesh sent about 700,000 workers abroad in 2018 and again in 2019.

Many of the 163 who came to Japan in 2018 settled in Sapporo. Julkarnaine earns five times his old income at his current employer Suncreer, which develops AI-powered systems for nursing care. While he came to Japan alone, he talks online with his family back in his home country almost every day. Famous for ramen and its annual snow festival, Sapporo is Japan’s fifth-largest city, with a population of 1.97 million. The city’s foreign population numbered 14,956 as of Jan. 1, according to official data — an increase of nearly 6,000 from 2013, the earliest year for which comparable statistics are available. The tally may have declined this year owing to travel restrictions imposed to curb the spread of the coronavirus.

The city’s Bangladeshi population is believed to number about 100, coming in behind only a few other places in Japan, including Tokyo and Miyazaki. The community is close-knit, with many connecting on Facebook and other social media to share information about such topics as buying hard-to-find ingredients.

Noritsugu Suzuki, a manager at system developer Techno-Labo, offered high praise for Bangladeshi workers after hiring one for the first time under a program set up by the Japan International Cooperation Agency.

“They’re serious and passionate,” Suzuki said. “We’re short on IT engineers from both Japan and abroad, so it’s a big help.”

Mossarrat Samma Tasnim, a 28-year-old AI specialist from Bangladesh who moved to Sapporo in April 2019, is among the company’s employees. A fan of such popular manga as “Naruto,” “Death Note” and “Fullmetal Alchemist,” Tasnim said she had decided that if she was going to live abroad, it would be in Japan.

“I wanted to live somewhere that wasn’t hot and crowded like Dhaka,” she said.

Tasnim joined Techno Labo as part of its search for talent, while her husband relocated to Japan with her, leaving behind his teaching job. She lives a full life here, joining up with a group of fellow Bangladeshis at Hokkaido University and visiting hobby shops in the entertainment district of Susukino for anime merchandise.

The district with the largest foreign population in Sapporo is Kita Ward, home to Hokkaido University, which has produced several tech startups. The city’s growing global reputation as a research center is drawing talent from abroad.

While much of Japan’s business tends to be concentrated in Tokyo and Osaka, global communications networks have made living in these cities less necessary than it once was. 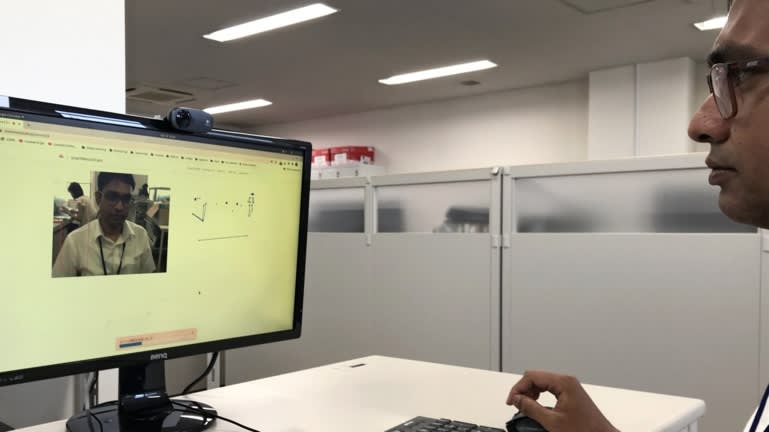 Mohammed Julkarnine at work at his AI software development job in Sapporo. (Photo by Toru Takahashi)

Employees from Bangladesh, China, Jordan, Singapore and Thailand sit side by side at the offices of Hokkaido University-affiliated AI startup Chowa Giken, where the official languages are English and Japanese.

Jordan-born Mohammad Saeed Samara joined the company in August, leaving his previous job at a Japanese trucking company. He earned a master’s degree and doctorate from the University of Tokyo and is eager to advance his career in Japan.

“I have a lot of freedom in my job, and my living space is larger and more comfortable” than previous residences in Chiba and Kanagawa prefectures near Tokyo, he said, adding that his pay is also about 10% higher at Chowa Giken.

Co-worker Sei Sou graduated from a university in the northern Chinese city of Dalian before completing her master’s and doctorate studies at Hokkaido University. She settled down in Sapporo, where she appreciates the variety of shopping available and the city’s lack of crowding compared with Tokyo and Osaka.

“I lived in Dalian. I don’t like the heat,” Sou said. “I’m lucky I found a job that’s in Sapporo, where a lot of my friends from graduate school are, and closely related to my research topics.”

The Japanese ideal of working close to home is starting to change as the coronavirus pandemic keeps workers out of their offices. Suncreer President Masato Mori expects that to give a boost to future hiring of foreign talent.

“Telecommuting has gained ground as the coronavirus has spread, and limits on where people can work have disappeared,” Mori said.

If current trends continue, it would be no surprise to find a Little Dhaka in Sapporo in another decade. The city’s budding internationalization is not stopping at just IT engineers, but spreading to many of the workplaces that support Sapporo’s economy.