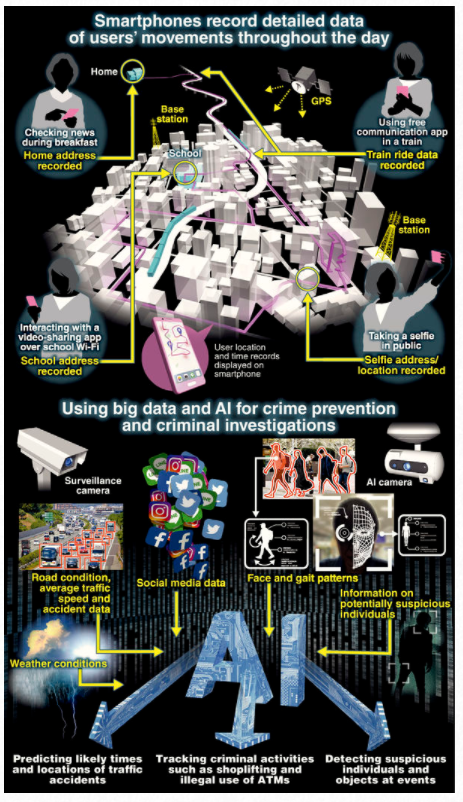 Smartphones can store highly detailed user location data, and the near-ubiquitous technology has been used in criminal investigations to root out the whereabouts of suspected criminal activity.

For instance, the Google Maps app has a function called Timeline that provides users with a record of where they have been, the length of their stay, with the actual names of the establishments visited.

Such functions are not limited to Google Maps alone. On iPhones, location information will continue to be recorded unless the device’s initial settings are changed.

Location information is mainly determined in combination with the smartphone’s GPS, Wi-Fi hot spots and communication with mobile network base stations.

In a large-scale vote-buying incident in connection with the July 2019 House of Councillors election, the prosecutors’ office analyzed data obtained from confiscated smartphones and searches for corroborative evidence followed.

“Location information will become a decisive factor in [criminal] investigations,” said a head of the business planning office at Tokyo-based AOS Data Inc. “It will also be useful for people to defend themselves, for instance, in the event of false accusations.”

Security cameras with artificial intelligence have proved powerful in preventing crimes such as shoplifting.

It has become a daily routine for the store manager to ask such a customer, “Are you looking for something in particular?”

This security camera, dubbed AI Guardsman, was developed in 2018 by Nippon Telegraph and Telephone Corp.

The camera’s AI can detect restless movements of individuals hanging around, over and over, in front of the same display shelf.

It was in June last year when 14 AI Guardsman units were installed at the drugstore where 3,000 customers visit daily. Thereafter, the financial impact from shoplifting plunged from ¥1 million a month in damage to about ¥300,000 a month.

“The AI keeps an eye on our blind spots,” the store manager said happily.

Meanwhile, AI has been incorporated into security drones. Secom Co. has developed an autonomous drone that can pursue a suspicious person upon detection. Sohgo Security Services Co. has also made public since July its experiment of a security drone that can avoid obstacles while flying.

By analyzing big data related to past crimes, AI can create potential forecasts of future illegal activity. Such advanced technology is currently being utilized in police procedures.

The Kyoto prefectural police in 2016 introduced an AI-powered crime prevention system, becoming the first police station in Japan to do so. The mechanism operates by analyzing a data set of crime locations, times and types from over the past 10 years. It automatically analyzes the data to predict where a crime is likely to occur next, displaying the information on a map inside of a several-hundred meter area.

Crime-prone zones — areas with purse-snatchings, sex crimes and so on displayed in red, yellow and blue on the map on a computer screen — are where police officers patrol more thoroughly.

“It has proved effective in keeping crimes in check,” said Tomohito Tanaka, chief of the investigation support analysis center at the Kyoto prefectural police.

The use of facial recognition technology, where AI instantaneously identifies or verifies who someone is by analyzing a facial image from a video source, is ongoing. While it has been introduced abroad to identify a dangerous person at a sporting event or to chase down the offender of a crime, it is currently utilized at some bookstores in Japan to prevent shoplifting. Facial recognition is also being used for immigration control at airports and in train stations at ticket gates.

As such AI camera systems can gather personal data just by having someone walk in front of one, there are ongoing concerns regarding an individual’s right to privacy.