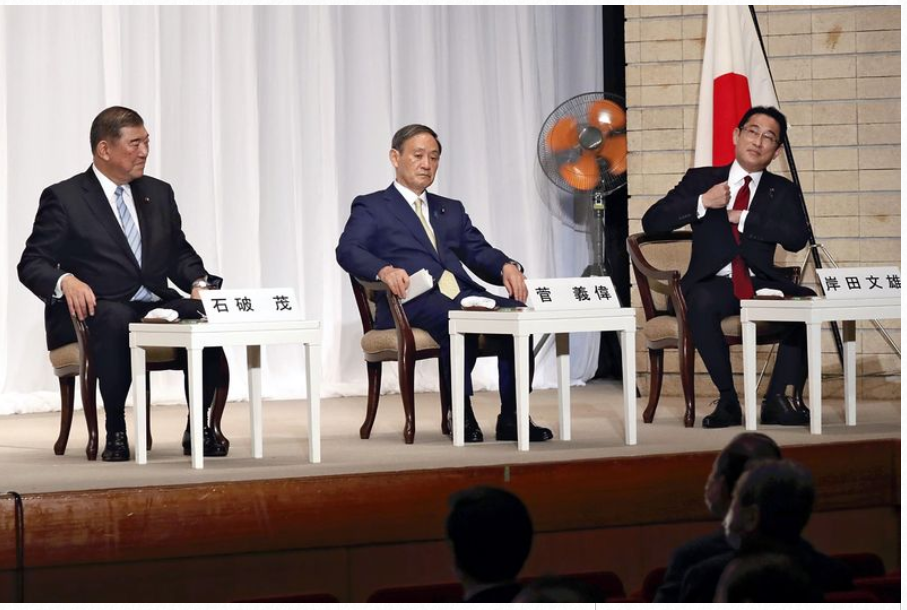 In the Liberal Democratic Party’s presidential election campaign that officially kicked off Tuesday, the main issues are economic measures to succeed the Abenomics economic policies and ways to counter the novel coronavirus. Discussions over policies that Prime Minister Shinzo Abe placed emphasis on, such as constitutional reform and foreign and security policies, are also attracting attention.

“I will continue to carry forward Abenomics and further reforms,” Chief Cabinet Secretary Yoshihide Suga said during a speech on Tuesday, indicating he will maintain Abe’s path in managing the economy and finances.

Abenomics, a package of monetary easing, fiscal stimulus and growth strategies, has been a signature policy of the Abe Cabinet from the start of the administration. Stock prices, gross domestic product (GDP) and other economic indicators improved significantly for a time, providing the impetus for maintaining the long-term administration.

Suga has a strong emotional attachment to the policy himself.

“I am one of parents who gave birth to this policy,” he said.

The key issues for the future are measures to restore the economy, which has sharply deteriorated as a result of the spread of the novel coronavirus, as well as fiscal consolidation.

“I would like to make necessary investments to meet new targets, such as with digitization and the supply chain, and achieve strong economic growth again,” Suga said in the speech.

LDP Policy Research Council Chairman Fumio Kishida praised Abenomics, but he said its benefits were not widely shared and called for revisions.

“The battle against the coronavirus has highlighted inequality as an issue that must be taken seriously,” Kishida said, advocating measures such as raising minimum wages.

Former LDP Secretary General Shigeru Ishiba called for an even bolder review of Abenomics. Ishiba argued that Abenomics led to a dependence on foreign demand and caused exhaustion in local economies. He proposed the appointment of a cabinet minister in charge of correcting the overconcentration of the economy in Tokyo, in a bid to turn the Japanese economy into a regionally diversified, domestic-demand-led economy.

Having been the first cabinet minister in charge of regional revitalization, Ishiba expressed commitments to measures supporting regional areas.

The three LDP presidential candidates placed a different emphasis on novel coronavirus responses. Suga pledged to steadily implement his policy package, which centers around aiming to secure vaccines for all Japanese citizens by the first half of next year. He is poised to step on the accelerator to restart social and economic activities through measures such as the “Go To Travel” campaign to support tourism in which he plays a leading role.

Suga also aims to break down the vertically divided structure of central ministries, thereby demonstrating his individuality. At a press conference, he expressed confidence, saying, “If I am in the position of prime minister, I can take the measures further forward.”

Meanwhile, Kishida called for the expansion of PCR testing.

Ishiba implicitly criticized the current government’s coronavirus response: “I don’t take the stance that the medical front is not under pressure.”

With regard to foreign and security policies, Suga stressed that he would continue to follow Abe’s foreign policy.

Compared with Kishida and Ishiba, who have served as cabinet ministers in charge of foreign affairs and defense and are known to be savvy with policy, “Suga is at an undeniable disadvantage here,” said a mid-level member of Suga’s campaign.