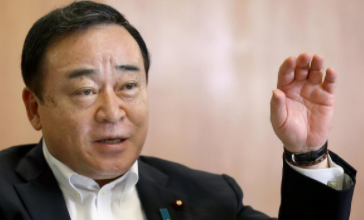 Minister of Economy, Trade and Industry Hiroshi Kajiyama sat down with the Sankei Shimbun on Sept. 8.

It is expected that the government will start discussing the review of the Strategic Energy Plan as early as this year. In the interview with the Sankei, the minister indicated a cautious stance toward reviewing the numerical targets in the energy mix because, the minister said, the target ratio of renewable energy for fiscal 2030 set out in the current plan has not been achieved yet. The minister intends to focus on the current situation at the government discussions and emphasize making progress in each area “one by one.” Kajiyama does not belong to any faction in the Liberal Democratic Party (LDP). He expressed his support for Chief Cabinet Secretary Yoshihide Suga in the LDP presidential election, which was officially announced on Sept. 8.

In the Strategic Energy Plan approved by the cabinet in 2018, the energy mix was set at 22-24% for renewable energy (17% in FY2018) and 26% for coal-fired power (32% in FY2018). “We’re going to think about how we can achieve the current targets without reducing the competitiveness of industry,” said Kajiyama with reference to the review. The minister also denied the possibility of revising the target for reducing greenhouse gas emissions by 26% by FY2030 compared with the FY2013 level.

In July, Kajiyama announced his intention to reduce inefficient coal-fired power generation. He strongly called for making renewable energy, such as wind power, a main power source. However, this time he expressed caution about excessive increases in environmental targets, saying, “[Excessive increases] may affect industry and people’s livelihoods.”

Meanwhile, Suga, the most likely candidate to win the LDP presidential election, regards the late former Chief Cabinet Secretary Seiroku Kajiyama, the economic minister’s father, as his political mentor, and Suga and Kajiyama are said to have a close relationship. If the Suga administration becomes a reality, Kajiyama said, “I want to support it through whatever role I am given.”