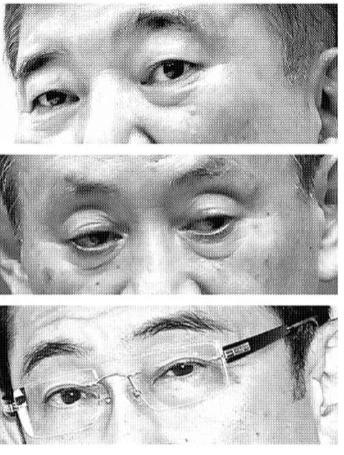 Ishiba (top) and Kishida (bottom) are trailing Suga (middle) in the LDP race. In past LDP leadership races, candidates’ ranking in the race affected their fate in the next election.

In the presidential election of the Liberal Democratic Party (LDP), Chief Cabinet Secretary Yoshihide Suga has secured support from five of the party’s seven factions, giving him an edge on his competitors. Former LDP Secretary-General Shigeru Ishiba and Policy Research Council Chairman Fumio Kishida are following Suga to clinch the second spot by focusing on gaining regional votes. In the past, the ranking of candidates affected candidacy in the next leadership race.

On Sept. 9, Ishiba visited Fujimino City, Saitama Prefecture, and inspected the damage caused by a typhoon that battered the area last year. He emphasized that he would work to establish a disaster prevention ministry to ready the country against natural disasters on an equal level nationwide. He then returned to Tokyo to attend a debate hosted by the LDP’s Youth Division and Women’s Affairs Division before leaving for Chiba Prefecture.

Kishida attended a meeting of prefectural assembly members and rank-and-file party members in Miho Village, Ibaraki Prefecture. He underscored his focus on regional areas, saying, “I want to implement the 5G next-generation mobile standard and other cutting-edge technologies first in regional communities to achieve development that reflects the unique character of each region.”

Suga can’t travel to regional areas because he is in charge of crisis management, so he is making the rounds of lawmakers’ offices in the Diet building in his spare moments.

On the morning of Sept. 9, the day after official campaigning for the presidential election kicked off, Suga first headed to the Members’ Office Building of the House of Councillors. The Upper House has many lawmakers who have close ties with interest groups, so such an action will allow Suga to win party member votes held by industry groups.

A total of 535 votes — 394 from Diet lawmakers and 141 from prefectural chapters allocated three votes each — will be cast in the leadership race. Many regional organizations decide on the distribution of the three votes based on the vote count in the chapter’s primary election.

The five factions supporting Suga have a total of 264 Diet members, while the Kishida faction has 47 members and the Ishiba faction has 19 members. Even though not all faction members will vote according to their faction’s policy, Suga has the upper hand. Ishiba and Kishida aim to add regional votes, which are more fluid than Diet member votes.

Ishiba won 45% of the regional vote in the 2018 presidential election, in which he ran against Prime Minister Shinzo Abe. Ishiba believes that it is possible to overtake Kishida, whose faction has nearly 30 more Diet members than his.

Ishiba and Kishida care about their ranking in the race because they are concerned that the difference between the second and third spots might affect the outcome of the next presidential election. Past examples show that no candidate who placed third in the presidential race has run in the following election since 1971, when candidates were required to gather a certain number of nominations to run in the election.

In the 2006 leadership election, in which Abe was chosen to succeed Prime Minister Junichiro Koizumi, Taro Aso came in second with 34 more votes than Sadakazu Tanigaki, who finished third. Tanigaki did not run in the presidential elections in 2007 and 2008. He became party president in 2009, after the LDP fell from power, but did not assume the premiership.

Aso, who came in second, ran in the leadership election again the next year in 2007 and garnered more votes than previously expected in a one-on-one fight with Yasuo Fukuda. Aso once again threw his hat in the presidential ring in 2008 following Fukuda’s resignation and assumed the office of prime minister.

In the 1972 race, where Kakuei Tanaka won and succeeded Eisaku Sato, Takeo Fukuda placed second and Masayoshi Ohira was third. Tanaka was succeeded by Takeo Miki after consultations within the party.

When Miki resigned in 1976, Fukuda was elected prime minister through negotiations. Ohira won the 1978 election and became prime minister.

Junichiro Koizumi came in third after Keizo Obuchi and Seiroku Kajiyama in the 1998 race and did not run in the 1999 race. When Obuchi became ill in 2000, Yoshiro Mori, who belongs to the same faction as Koizumi, was picked to succeed Obuchi. Koizumi became prime minister in 2001.

Ishiba, who is making his fourth bid for the party presidency, has drummed up support by campaigning in regional areas and has been high in the opinion poll rankings for “most suitable candidate to be the next prime minister.”

Prime Minister Abe and Aso, who distance themselves from Ishiba, once assumed Kishida would be the candidate for Abe’s successor. The Ishiba camp is wary of the possibility that some votes supporting Suga will be allocated to Kishida to prevent Ishiba from gaining second place.

The term of the new LDP president to be elected in the upcoming election expires at the end of September 2021 because the person will serve out Abe’s remaining term. This means the LDP will hold another presidential race one year later.

The Suga camp aims to win the highest number of both Diet members’ and regional votes. It will stably run the government, garner strong public support, and thereby make it difficult for other candidates to run in the next leadership race.