TOKYO — The Japanese economy in July grew by 0.2% on the month in real terms, according to estimates released Thursday by the Japan Center for Economic Research, indicating a second consecutive month of expansion.

External demand was responsible for lifting the gross domestic product as a whole. Japanese exports to the U.S. and China jumped by significant margins.

However, the country’s internal demand went into negative territory in July. Capital expenditures shrank 2.7% while consumer spending receded by 1.4%, according to JCER. 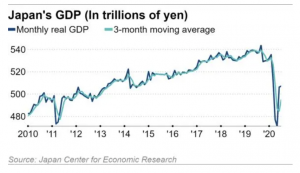