GUANGZHOU, China–A service that allows strangers to rifle through one’s belongings is proving popular among Japanese expatriates trying to retrieve their possessions from China during the pandemic.

Japanese who have temporarily returned to their home nation from China have been prevented from re-entering the nation because of strict travel restrictions and limited available visas imposed to prevent the spread of novel coronavirus infections.

To recover their properties in China, they can simply use their smartphones in Japan.

One customer returned to Japan in March but could not book flights back to Guangzhou because of the Chinese authorities’ entry limitations.

The client’s employer gave instructions to work in Japan, but the possessions remained in the residence in China.

In late July, the individual’s belongings, including tableware, clothing and documents, were taken out of a home in Guangzhou by staff of a local subsidiary of Yamato Holdings Co.

The removal process was shown in real time on a smartphone’s video chat feature. The client could check the items and decide which ones should be sent to Japan.

The remote transfer process requires double or triple the time usually needed for moving services because “careful examinations are essential to prevent clients’ valuables from being lost,” according to the Yamato Holdings subsidiary.

The client said the service “offered me a sense of security” but was initially reluctant to let strangers enter the house to pick up underwear and other personal articles.

Yamato Holdings said the number of inquiries about its remote transfer service in China started rising around April, and it has provided the service on 50 occasions in Shanghai alone.

About half of the inquiries are still about remote services, according to company representatives.

“Effectively, all such inquiries come from customers connected to China,” said a public relations official of Yamato Holdings. “Many people who returned temporarily before the Chinese New Year holiday apparently cannot enter China.” 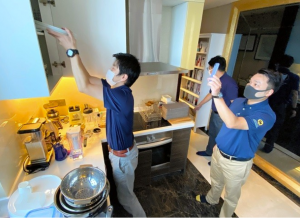 Workers of a “remote transfer” service remove items from a home in Guangzhou, China, in late July. The process was viewed on a smartphone app by the customer in Tokyo. (Atsushi Okudera)