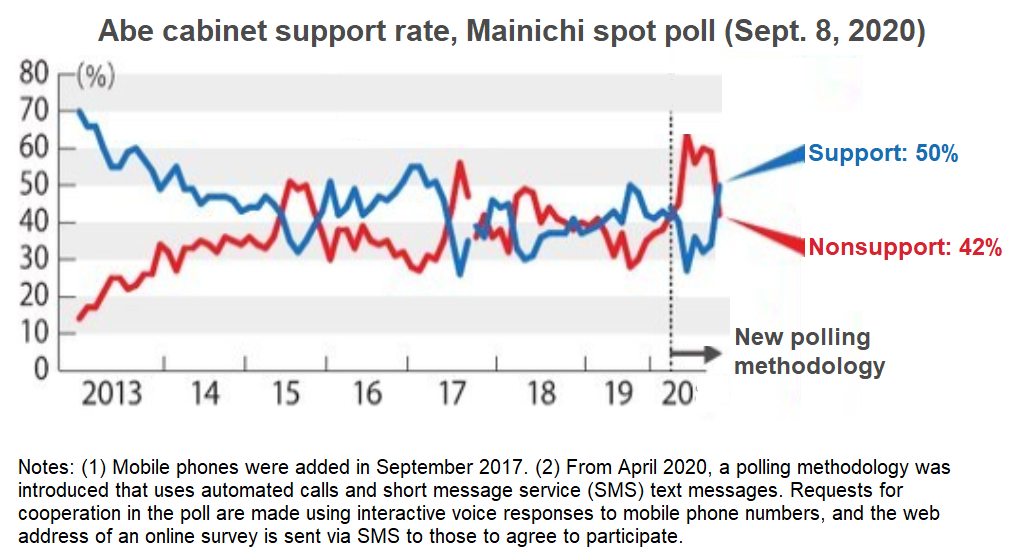 In the Sept. 8 spot public opinion poll conducted by the Mainichi Shimbun and the Social Survey Research Center, 50% of respondents said that they support the Abe cabinet, up 16 percentage points from the Aug. 22 poll where only 34% of pollees said they back the cabinet. On Aug. 28, Prime Minister Abe announced that he would resign, citing the recurrence of a chronic illness as the reason. It is extremely unusual for a prime minister’s cabinet support rate to increase after announcing his resignation. The Abe cabinet’s nonsupport rate was 42%, a substantial drop from the 59% found in the Aug. 22 poll. In the latest poll, support exceeded nonsupport.

Abe’s support rate right after the launch of his second cabinet in December 2012 was 52%, and it rose to 70% in March 2013, although no direct comparison can be made because polling methodologies differed. The Abe’s cabinet support rate fell below nonsupport temporarily around the time that Prime Minister Abe rammed the security legislation through the Diet in 2015 and when he invited public ire with the Kake Educational Institution scandal among others in 2017. Generally, however, cabinet support remained within the 30% to 40% range.

Prime Minister Abe, however, has been under fire since April this year for his handling of the novel coronavirus. Cabinet support dropped to 27% in the May 23 poll and has been low ever since.

[Polling methodology: The survey was conducted by the Social Survey Research Center and the Mainichi Shimbun on Sept. 8 of those 18 years old or older. A computer-aided random digit sampling (RDS) method was used to generate phone numbers (both landlines and cell phones) randomly by computer, and an interactive voice response system was used to call those numbers. For mobile phones, people were asked through audio guidance to cooperate in the survey, and those who agreed to participate were sent a short message service (SMS) text message providing a link to an online answer form. For landline phones, respondents were asked questions by interactive voice response system and pushed buttons on their phones to indicate their answer. The target number of valid responses was set at 700 for mobile phones and 300 for landlines phones. Valid responses were received from 730 mobile numbers and 301 landline phone numbers.]