44% back Suga as next LDP president while 36% support Ishiba, Mainichi spot poll 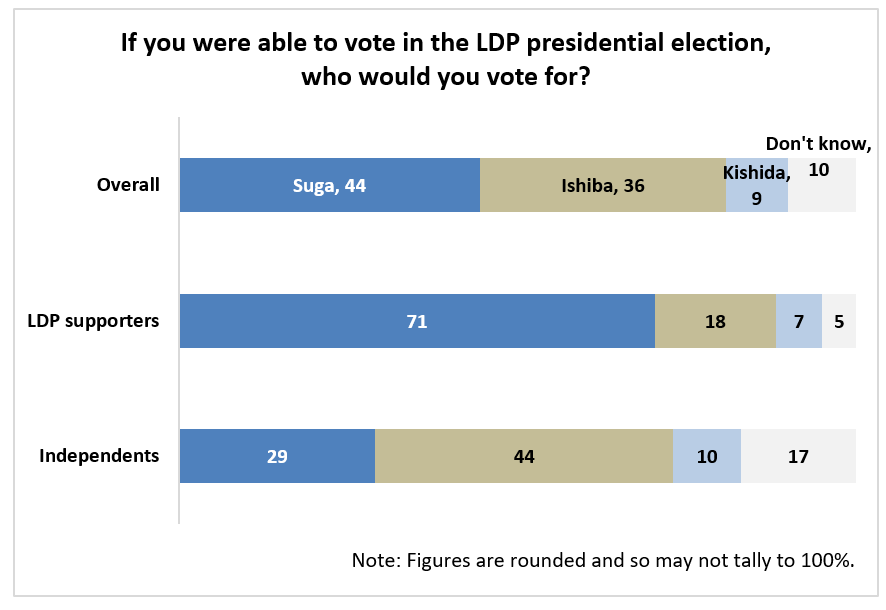 With the Liberal Democratic Party’s announcement that it will hold a presidential election to select Prime Minister Shinzo Abe’s successor, the Mainichi Shimbun and the Social Survey Research Center conducted a spot nationwide public opinion poll on Sept. 8. Asked who they would vote for if they were able to vote in the LDP presidential election, 44% said Chief Cabinet Secretary Yoshihide Suga, while 36% said they would back former LDP Secretary-General Shigeru Ishiba. Only 9% of respondents selected LDP Policy Research Council Chairperson Fumio Kishida. While this shows that Suga enjoys an advantage, it also suggests that Ishiba has strong-rooted support among the people.

On Aug. 28, Shinzo Abe announced his resignation, citing the worsening of a chronic illness as the reason.

Within the LDP, more and more are calling for the Lower House to be dissolved and a general election held while the public still feels appreciation for Shinzo Abe and the party can expect congratulatory votes for the new administration.

The poll probed views on whether a general election should be held. Respondents were asked to indicate which is closer to their view: the new prime minister should ask for the people’s confidence by holding a Lower House election soon after he takes office, or coronavirus countermeasures should be prioritized over an election now. Some 65% of all respondents said that coronavirus countermeasures should be given priority, easily exceeding the 23% who thought an election should be held soon.

[Polling methodology: The survey was conducted by the Social Survey Research Center and the Mainichi Shimbun on Sept. 8 of those 18 years old or older. A computer-aided random digit sampling (RDS) method was used to generate phone numbers (both landlines and cell phones) randomly by computer, and an interactive voice response system was used to call those numbers. For mobile phones, people were asked through audio guidance to cooperate in the survey, and those who agreed to participate were sent a short message service (SMS) text message providing a link to an online answer form. For landline phones, respondents were asked questions by interactive voice response system and pushed buttons on their phones to indicate their answer. The target number of valid responses was set at 700 for mobile phones and 300 for landlines phones. Valid responses were received from 730 mobile numbers and 301 landline phone numbers.]