TOKYO — Japanese biofuel companies are expanding their production of fuel from sources such as algae and palm oil waste, despite the current lack of demand from the aviation industry and falling oil prices due to the COVID-19 pandemic.

Biofuel startup Chitose Bio Evolution, which received funding from oil and gas company Eneos Holdings in March, is planning to expand production of algae that can generate biofuels in Malaysia. It has a 1,000 sq. meter production facility in the Sarawak Biodiversity Centre. Including the rest of Southeast Asia, it is looking to grow its production facility to larger than 200,000 sq. meters.

The company is aiming to raise a few billion yen from governments and companies for the expansion, which would generate over 1,000 tons of dried algae. That would translate into roughly 500 tons of oil, which would then need to be refined. This would “still not be competitive with crude oil, but would generate significant volume,” said Tomohiro Fujita, CEO of Chitose.

Euglena, another Japanese biofuel company, is also looking to increase algae production, possibly in Indonesia or Colombia. In addition, the company is searching for other biofuel sources, such as waste from palm oil production in Southeast Asia, Tatsu Kou, manager of the biofuels business department, told the Nikkei Asian Review.

Low oil prices have historically impacted the outlook for biofuels and, consequently, investments in the sector. For example, shares in America’s TerraVia Holdings, which was acquired by Amsterdam-based Corbion in 2017, fell in tandem with a plunge in oil prices in 2016. But biofuel companies say they see little impact this time, due to increasing government incentives and pressure to address environmental issues. 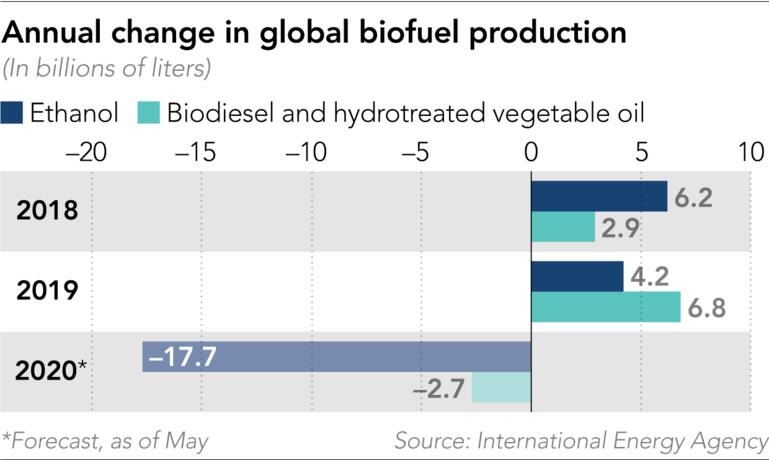 Demand for biofuels is expected to pick up once transport industries resume operations. The European Union expects its member countries to source 10% of their transport fuels from renewable energy by this year. International flights are also subject to the International Civil Aviation Organization’s plan to arrest the rise of carbon dioxide emissions from 2020, with airlines expected to pay for additional emissions from 2021.

“Biofuel was originally expected to account for only a small percentage of total jet fuel demand, so the impact of COVID-19 on fuel demand does not have a huge impact,” said Chitose’s Fujita.

Although biofuels can be extracted from ethanol produced by fermenting crops such as sugar cane, this method is inefficient in terms of the amount of energy required, Fujita said. Such processes also eat into grounds that could otherwise grow food.

In terms of securing enough supply, “algae has potential and that does not change much [with the coronavirus],” he said. Algae grows rapidly under sunlight, making Southeast Asia an ideal location for Japanese companies. Fujita added that algae can also be used for other products such as protein or developed into plastic, if demand for fuels does not pick up as hoped.

Heavy machinery maker IHI is also growing algae in Thailand, in a project with the government-backed New Energy and Industrial Technology Development Organization.

Euglena’s Kou said that he, too, was not worried about being able to sell the algae fuel because “there is definitely demand globally,” he said. The company is aiming to build a new biofuel production facility by 2025 to increase capacity to 250,000 kiloliters a year, from 125 kl now.

Euglena had hoped that the first commercial flight using algae fuel could be launched this year but this plan is now uncertain. Chitose’s Fujita also said a partnering company had halted investments in the company due to the coronavirus crisis.

The International Energy Agency’s report in May predicted that global biofuel production could return to 2019 levels, if transport fuel demand rebounds in 2021. However, output would still be 5% lower than the agency’s original pre-pandemic forecast for 2021, it said.

Due to increased pressure on airlines to reduce emissions from next year, Kou said airlines were not in a position to delay talks for more than a year about using biofuels.

To increase production, the company, which mixes algae with waste oil, is now looking for ways to secure more energy sources. To grow more algae, the company is looking for suitable locations, such as Indonesia and Colombia, with trading company Itochu.

For non-algae sources, Euglena recently announced a partnership with Itochu’s affiliate convenience store FamilyMart. Under this partnership, Euglena uses waste oil from the convenience stores to refine into biofuel, while FamilyMart uses its products to fuel its vehicles. Kou said Euglena was also approaching companies in Southeast Asia to use waste from palm oil production.

In building the fuel production plant, Euglena is looking to partner with oil companies. The company has already been working with companies including Eneos and U.S. oil group Chevron.

“Supply of crude oil has limits, so prices could go up,” said Kou. “If we can grow algae at low cost, we would be able to secure our own resource… that is what big companies that are willing to work with us see in us,” he said.