The majority of the Liberal Democratic Party (LDP) prefectural federations want the new party president to prioritize COVID-19 countermeasures and economic measures in his policy agenda, the Asahi Shimbun learned. The local federations are given three votes each to cast in the LDP presidential election, which will be held on Sept. 14 and counted on the same day. Senior members at the federations responded to the Asahi’s questionnaire, and their answers highlighted the difficulties the prefectures face under the pandemic. No unified view existed on the timing of a snap election.

Many cited the positive outcomes of the Abe administration’s economic and diplomatic efforts for supporting policy continuation. “The current policy has improved economic conditions, including an uptick in stock prices” (Kumamoto federation). “Abe conducted an unprecedented kind of diplomacy for Japan, interacting with global leaders on an equal footing” (Tochigi federation).

Another factor contributing to the support of policy continuation is the coronavirus pandemic. “In order to quickly end the pandemic, it would be desirable not to change the government’s response midcourse” (Saitama federation).

Asked what issues they would like the new party president to tackle (multiple responses permitted), approximately 90% said coronavirus countermeasures and economic measures, followed by regional revitalization. Many called for a revival of local economies, pointing out that “concentration of the Japanese economy in Tokyo remains unchanged” (Kagawa federation).

Some prefectural federations considered the Abe administration’s falsification of official documents in the Moritomo scandal an “issue of the past,” while others hoped the new president would give better and clearer explanations (Ishikawa federation).

Only 18 federations said they want the next party president to pursue constitutional amendment, pointing out that “it is not easy to coordinate and unify party positions on the issue” (Aomori federation). Constitutional revision was a key policy for Prime Minister Shinzo Abe.

The Asahi questionnaire also asked the federations for their views on the timing of dissolving the Lower House and holding a snap election. The terms of the current Lower House members are scheduled to end in October 2021.

Seventeen federations said the best timing would be “by the end of the year,” making it the most frequently given response. Meanwhile, 15 federations answered “early next year” or “close to the scheduled date of the end of the Lower House members’ terms.”

Many that support a snap election by the end of the year hope to capitalize on the rise of LDP support in opinion polls: “Backing for the party is likely to increase when the new president is elected. That would be the best timing to dissolve the Lower House and hold an election” (Fukuoka federation). The Aomori federation suggested, “We are in the middle of the coronavirus pandemic. We should propose bold a policy agenda and ask for the people’s support.”

On the other hand, some prefectural federations are hesitant to hold an election amid the pandemic.

Many who support having a general election next year believed an earlier election would be difficult unless the virus were brought under control. “The party should pour all its energy into virus countermeasures and economic measures, without a lapse in governance” (Hiroshima federation).

The Ehime federation will abstain from voting in the party presidential election to avoid disrupting government operation. The federation said the Lower House election should be held after the government enacts the FY2021 budget so as not to invite the disapproval of the public.

Meanwhile, former Environment Minister Koichi Yamamoto (Lower House, Ehime 4th district) will abstain from voting in the LDP presidential election for health reasons. The decision was conveyed to the Tanigaki group to which Yamamoto belongs. Yamamoto will not cast an absentee ballot either, reducing the number of Diet member votes to 393. 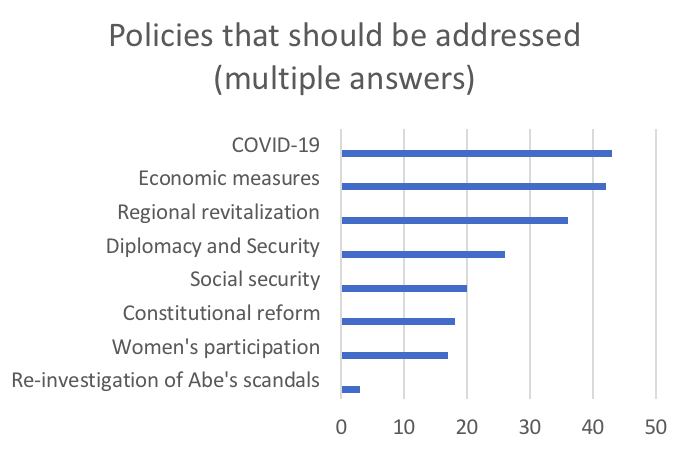