TOKYO — As Chief Cabinet Secretary Yoshihide Suga emerges as the leading candidate to succeed Shinzo Abe as prime minister, two politicians who have known him for decades paint a picture of a detail-minded thinker devoted to his work — to the point of wearing his shoes out from door-knocking.

Hiroshi Kajiyama is the son of Suga’s mentor, Seiroku Kajiyama, who served as secretary general of the Liberal Democratic Party and chief cabinet secretary in the 1990s and who Suga backed in an unsuccessful bid for LDP leadership in 1998.

The younger Kajiyama, now Japan’s minister of economy, trade and industry, has been active in politics alongside Suga for 20 years, and praises his foresight, use of data and ability to take quick, decisive action.

With their acquaintance spanning 45 years, Okonogi — who, like Suga, is a longtime representative of Kanagawa Prefecture — is serving as Suga’s campaign director in the LDP leadership race. But before then, in Okonogi’s days as a novice campaigner, Suga was a strict but effective teacher who corrected his bowing form and taught him to speak properly to voters.

The vote for selecting the ruling LDP’s new leader takes place Monday, with the winner to become the next prime minister. 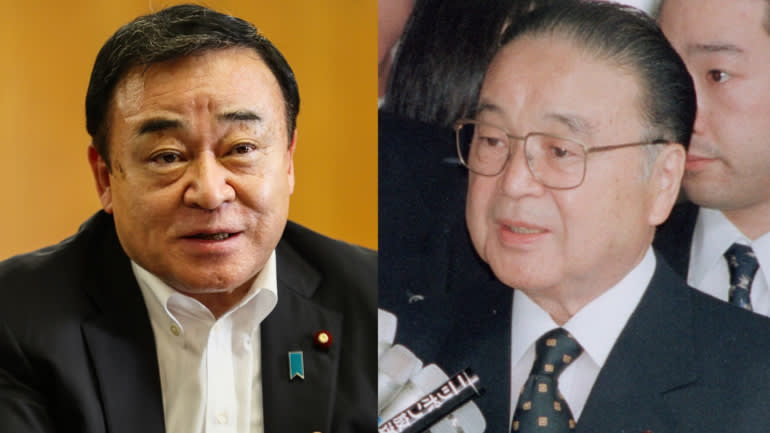 Q: How did you and Suga meet?

Kajiyama: We became acquainted after I became a Diet member [in 2000]. When my father, Seiroku, ran for LDP leadership, young lawmakers like Suga had come together around him. Because my father didn’t talk much about politics, after he died, I asked Suga and various others who were close to him [about what he was like]. That gave me an image of Seiroku Kajiyama as a politician for the first time.

Every year, even while in leadership positions like chief cabinet secretary, Suga has gone alone to visit my father’s grave and meet with my mother. There aren’t many who do that every year. Suga visits the grave of his mentor, Seiroku Kajiyama, every year.   © Kyodo

Q: What are your impressions of Suga?

Kajiyama: He’s someone who’s quick to take action. He moves fast and can make judgments quickly. He studies to anticipate the future in different ways, sets up various study groups, and then implements his plans. He thinks in detail, based on data, about how society is moving and which way the wind is blowing.

I was appointed state minister of land, infrastructure, transport and tourism at the start of Abe’s second government, and [Suga] said right away that we were going to loosen visa restrictions and upgrade ports. Inbound tourism is in a lull now because of the novel coronavirus, but we came within striking distance of 40 million foreign visitors a year. 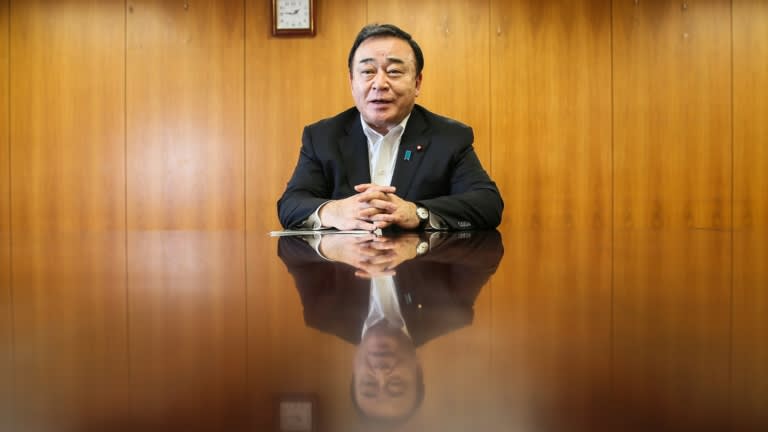 Kajiyama has been active in politics alongside Suga for 20 years, and praises his foresight, use of data and ability to take quick, decisive action.(Photo by Akira Kodaka)

Kajiyama: He has a variety of study groups — some are for lawmakers in their first few terms, and some have business figures who are invited to speak. At the ones for young lawmakers, once they have more election victories under their belts, he passes the torch to them, saying “I’ll leave the rest to you. Good luck.”

Q: Suga has a rural side with his upbringing in Akita Prefecture and an urban side as a representative of Kanagawa Prefecture.

Kajiyama: He values his connections to the Akita area and his family ties there, and there are parts of it that he can’t simply set aside — that’s part of his character. But at the same time, he also served on the city council of Yokohama, a major city. Looking at just the issue of the port there, he put an emphasis on how to make it more digital. He has a lot of foresight.

Q: If Suga wins, what sort of prime minister do you think he’ll be?

Kajiyama: Suga has observed the latest administration from a position very close to Abe. He probably will quickly take up things that he’d thought about but couldn’t do. It’s been said that he would be a continuation of the Abe administration, but thoughts on politics and governance that he mulled over as a politician will be put into action.

Of course, [the next prime minister] will have to build a consensus as much as possible, but there will also be times when he’ll need to charge ahead on things. Suga is a politician who can do that. Okonogi, like Suga, is a longtime representative of Kanagawa Prefecture. He is serving as Suga’s campaign director in the LDP leadership race.(Photo by Kai Fujii)

Q: When did you and Suga meet?

Okonogi: When I was in third or fourth grade, Suga, dressed in a suit, suddenly started joining my family at meals. He lived nearby as my father’s secretary and came to eat breakfast with us. He was around 26 at the time.

My impression of him hasn’t changed at all in that time. Simply put, he’s serious. When he sets out to do something, he plugs away at it until it’s done. I’ve never known him to not follow through.

Q: Is there any specific memory that has stayed with you?

Okonogi: When I attended Suga’s wedding reception, I exchanged pleasantries with one of his campaign supporters, who said, “His soles get worn out, so I often give him new shoes.” From way back when, Suga has set targets for door-to-door canvassing and stuck to them. Suga started his career as a member of the Yokohama city council.

Q: Did he teach you?

Okonogi: When I ran for office, he went door to door together with me. [When I bowed,] he would tell me, “You’re still holding your head too high. You should lower it a little more.” He corrected how I spoke and the way I interacted with voters. He was strict, but he taught me well.

Q: Do you have any memories of Suga from outside of work?

Okonogi: Almost all of them have to do with work. He’s so serious that I once asked him when we were alone together, “What’s so interesting about your work?”

Three or four years ago, I told him that I thought he could become prime minister. He said he shouldn’t, because he “likes doing this sort of thing.” I think he enjoys fixing messes and untangling problems.

Q: How do you think Suga would change if he becomes prime minister?