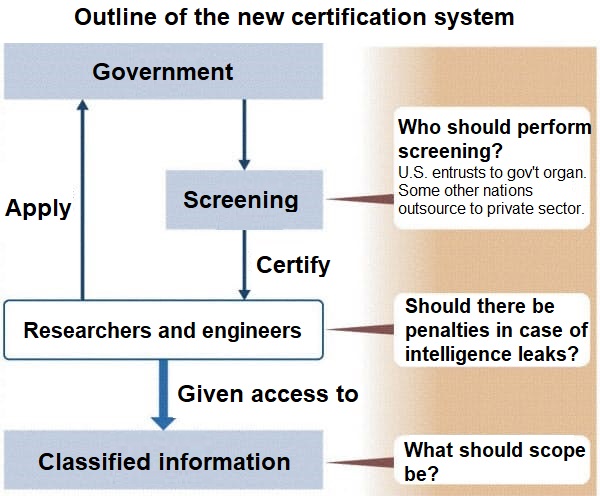 The government and the Liberal Democratic Party (LDP) have entered deliberations on creating a “qualifications” system that would certify researchers trusted to share classified information, including that related to state-of-the art technology. The government will screen applicants, and those who pass will be guaranteed by the government not to leak intelligence. This will make it easier for [Japanese researchers and engineers to] participate in joint research with overseas institutes. Many matters still need to be discussed, including which fields the system should cover and which organizations should screen applicants. It has been proposed that the system be started on a small scale.

The LDP Diet members’ league for rule-making strategies (chaired by Akira Amari) is drafting a proposal to introduce the system in September.

The aim is to create in Japan what is known in the West as a “security clearance” system. According to Tama Graduate School of Business Visiting Professor Akira Igata, who specializes in economic security, countries participating in the “Five Eyes,” an intelligence alliance that includes the United States and the United Kingdom among others, already have such a system in place.

Behind Japan’s consideration of such a system lies America’s and other countries’ wariness of China. Suspicions remain that Chinese involved in joint research with overseas institutes pass technological intelligence to China.

If it were guaranteed that Japanese engineers and researchers would not leak intelligence, the companies and research institutes of the United States and other countries would be able to engage in joint research with them without concern about leakage. It would also prevent the leakage of intelligence held by Japan.

In addition to the LDP, the National Security Council’s economic team, the Ministry of Economy, Trade and Industry, the Cabinet Office, and other government ministries and agencies have also started deliberations about the design of the system.

The proposed framework would target university researchers and company engineers. These researchers and engineers would apply for certification when they want to participate in international joint research or share classified information with other countries. The government would evaluate the trustworthiness of applicants by conducting a screening and would certify those deemed not to pose a risk of leaking intelligence.

[In its security clearance framework] the United States performs detailed investigations, probing such matters as the applicant’s nationality, overseas travel record, criminal record, financial debt status, colleagues, friends, and neighbors. According to a report issued by the U.S. Director of National Intelligence, as of 2017 there were about 4 million people certified to handle classified information, slightly over 1% of the population.

First, Japan will focus its deliberations on technological intelligence, the focus of the proposed system. “Technological intelligence” refers to advanced technology, including artificial intelligence (AI) and quantum computers, and there is a proposal to define the term as research fields in which government-affiliated institutes are involved. A senior government official comments, “An increasingly wide range of fields are directly linked to security.”

Another focus of the discussions is which organizations should conduct the screening. According to Professor Igata, the U.S. Department of Defense heads the U.S. security clearance system. In Australia, government institutes commission a few dozen private-sector research organizations to perform the screening.

The following organizations are being considered as candidates to perform screening in Japan: The National Police Agency, the Public Security Investigation Agency, and the Cabinet Information Research Office. The government and the LDP are envisioning a system where screening is performed mainly by the Cabinet Information Research Office in the initial stages. It is very likely that the system will begin on a small scale with only a few dozen people granted qualifications.

Japan already has a system for background checks, known as “security clearance assessments” in the Act on the Protection of Specially Designated Secrets, which came into force in 2014. The framework targets civil servants as well as private-sector individuals commissioned to participate in projects by the Ministry of Defense and the Acquisition, Technology & Logistics Agency. The applicant’s criminal record as well as the nationalities and addresses of his or her parents, spouse, and children are investigated. It is not unusual for screening to take half a year or more.

The senior government official emphasizes that “Japan compares poorly against other countries in budget and personnel” for introducing and then expanding a new credentialing system. Professor Igata points out, “There are complaints that screening takes too long even in the U.S.” Japan will not just copy a foreign country’s system but will create an original Japanese system that is ideally suited to it.

Japan will also consider incorporating penalties, with an eye to raising the trustworthiness of the Japanese system in the eyes of the international community. According to Keio University Professor Satoru Tezuka, an expert in cybersecurity, anyone found to have leaked intelligence “can never do work for the government again” under the U.S. system.

In the “security clearance assessment” in Japan’s Act on the Protection of Specially Designated Secrets, those who disclose a specially designated secret without authorization are punished by imprisonment with labor for up to 10 years. A proposal has been floated within the government to apply this level of penalty in the new certification system.

The main objective of introducing the system, though, is to promote international joint research. One of the leading proposals suggests revising the “science, technology and innovation revitalization act,” which calls for strengthening Japan’s international competitiveness in such fields as AI. Some continue to say that “penalties are inappropriate in legislation that promotes joint research.”