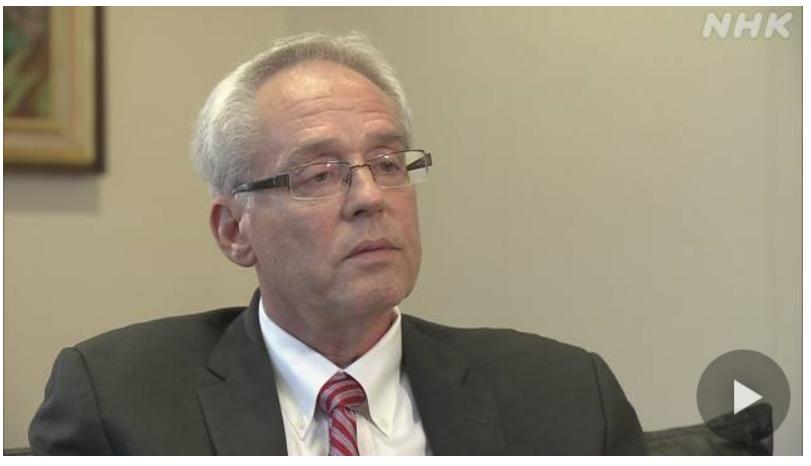 The trial of Carlos Ghosn is scheduled to begin at the Tokyo District Court on Sept. 15. The former Nissan Motor chairman, who fled to Lebanon, is accused of failing to disclose the full amount of his massive compensation package from Nissan. Former Nissan director Greg Kelly, who will stand in court as an accomplice, gave an exclusive interview to NHK, saying, “I did not violate any Japanese regulations.” He also said of former Chairman Ghosn: “I wish he were in court to testify. He has to live with his decision to flee.”

Former Nissan Chairman Carlos Ghosn, 66, is accused of violating the Financial Instruments and Exchange Act by underreporting his compensation by more than 9.1 billion yen in securities reports over a period of eight years through fiscal 2017. Former director Greg Kelly, 63, has been charged as an accomplice to Ghosn.

The first trial is scheduled for Sept. 15. But Ghosn fled to Lebanon, so the trial is set to proceed in his absence.

Ahead of the trial, Kelly gave an exclusive interview to NHK. He said he is not guilty: “I did not violate any of Japan’s disclosure regulations.”

As for the flight of Ghosn, Kelly said: “I wish he were in court to testify. He made a decision that he thought was best for him and his family, and he has to live with that decision.”

In the upcoming trial, the prosecution will argue that Ghosn failed to disclose slightly more than 9.1 billion yen of his compensation and deferred the receipt of this sum until after his retirement with the aim of avoiding publicly disclosing his massive pay package following the introduction of the Financial Instruments and Exchange Act. The prosecution will also argue that Kelly was deeply involved in the scheme.

Kelly refutes: “Former Chairman Ghosn accepted reduced compensation because the French government wasn’t happy with the package he was getting at Nissan, not because he was trying to postpone the receipt of part of his compensation. At that time, there were a number of rival companies who were willing to pay far more than Nissan to the former chairman. We were thinking of ways to keep him from leaving Nissan. I thought we could persuade him into staying with Nissan even after his retirement if we could pay him for his invaluable work at Nissan.”

Asked about how he feels before going into court, Kelly said: “Former Chairman Ghosn was a very good CEO. We wanted him to protect Nissan’s independence from Renault. I would like to tell the court why it was important for Nissan to maintain its relationship with Ghosn for a long time.”

In the upcoming trial, prosecutors will insist that former Chairman Ghosn postponed the receipt of more than 9.1 billion yen of the total compensation of 17 billion yen he had earned over eight years, in order to avoid the public disclosure of his massive pay package.

The disclosure of executive compensation is mandatory when the amount is set, even if it is before actually payment. The point at issue in the trial will be whether Ghosn’s deferred post-retirement compensation was fixed and whether Kelly was involved in devising the deferred compensation and future payment method.

The prosecutors will argue that it is apparent that the postponed compensation payment was fixed, on the grounds of the existence of multiple agreements that bear Ghosn’s signature.

As for Kelly, the prosecution will point out that he thought about ways to ensure the payment of the deferred compensation under the instruction of Ghosn and that Kelly signed a draft contract to pay compensation to Ghosn after retirement.

Kelly has admitted that he signed the draft and he will argue that the contract refers to compensation for [Ghosn’s] work as adviser after retirement, not to deferred payment of executive compensation. He will also insist that the contract was aimed at keeping Ghosn at Nissan to protect the Japanese company from Renault.

The defense will claim that even if the deferred executive compensation were not disclosed, it would only be subject to administrative discipline, such as a surcharge, and would not be subject to criminal penalties.

A key feature of this case is that “plea bargaining” was used for prosecutors to obtain evidence, such as confessions and documents, in exchange for not prosecuting two Nissan insiders, including a former chief of the secretary’s office.

Last year, before Ghosn fled, his defense team insisted that “a plea-bargaining deal is illegal because it is aimed at ousting the former chairman.”

The former head of the secretary’s office and one other who entered a plea bargain are scheduled to appear before the judge as witnesses. Attention is also focused on how the court will evaluate the credibility of testimonies in the courtroom.

Expert: “Verdict will depend on whether compensation was fixed or not”

Tomoyuki Mizuno, a former penal judge and professor at Hosei University Graduate School, says about the upcoming trial: “As far as I am aware, there has never been a case that contested whether the compensation of a top executive at a major company was appropriately reported in company financial statements or falls under the category of false entries. The trial also draws a lot of attention because it involves plea bargaining.”

Mizuno added: “I think the verdict of guilty or not guilty will depend on whether the amount of compensation to be paid to Ghosn in the future was fixed or not. It is extremely difficult to determine whether the unpaid compensation was fixed at that time or it was just a plan. The decision should be made from a comprehensive standpoint based on many witnesses and documents.”

As for the impact of plea bargaining on the upcoming trial, Mizuno said: “All the people who accepted plea bargains will take a certain perspective. Just because the content of the testimonies in court is consistent does not mean that they can be automatically trusted. The key is whether there is evidence to back up the testimonies or whether [the prosecution] can withstand the defense’s counterarguments and give rational explanations.”

The first trial against Kelly and Nissan as a corporate body begins on Sept. 15. It is scheduled to continue until July next year with more than 70 proceedings scheduled for the examination of witnesses.

A source says Nissan’s former chief of the secretary’s office and a foreign senior vice president who accepted plea bargains with the prosecution as well as former president Hiroto Saikawa will appear in court as witnesses.

Kelly is scheduled to undergo questioning 14 times starting from May 2021. After the examination of witnesses and questioning of the defendant, the prosecutor will give his concluding argument followed by that of the defense. The final judgment will be delivered after that.