Japan’s ruling Liberal Democratic Party on Monday elected Chief Cabinet Secretary Yoshihide Suga as its party president, after a majority of its lawmakers and regional representatives cast votes for him, putting the veteran politician on track to succeed Shinzo Abe as prime minister.

After Abe’s resignation announcement, the Japan Center for Economic Research and Nikkei conducted a survey from Aug. 31 to Sept. 7, collecting 12 responses from economists and analysts in the five biggest member countries of the Association of Southeast Asian Nations, or ASEAN — Indonesia, Malaysia, the Philippines, Singapore, and Thailand — as well as India. The questionnaire didn’t specify Suga as the next prime minister, but most respondents were aware of his front-runner status.

In their answers, the economists and analysts expressed expectations for Japan to contribute more to regional stability under its new leadership through enhanced cooperation with Asian countries and balanced relations with both the U.S. and China. They also hope Japan will offer models for reform in fields such as social welfare.

Japan’s relative economic power has undeniably decreased throughout the 2010s. The size of Japan’s economy was almost the same as China’s in 2010. But by 2019 it had fallen to about a third of its neighbor’s when measured in nominal U.S. dollars. Many international relations experts see limited room for Japan to take the initiative while two giants — the U.S. and China — dominate the region.

While recognizing these circumstances, the Asian experts expressed expectations for Japan in various fields. Tirthankar Patnaik of the National Stock Exchange of India stressed that “Japan’s role as a guardian of the liberal, equitable, rules-based international order should continue.” Carlo Asuncion of Union Bank of the Philippines echoed that, saying Japan should “continue to be an important player in the geopolitical situation in Asia.” Shekhar Shah of the National Council of Applied Economic Research in India emphasized that Japan should “continue to show leadership in Asian affairs on trade and international relations, particularly in the context of China and the U.S.” 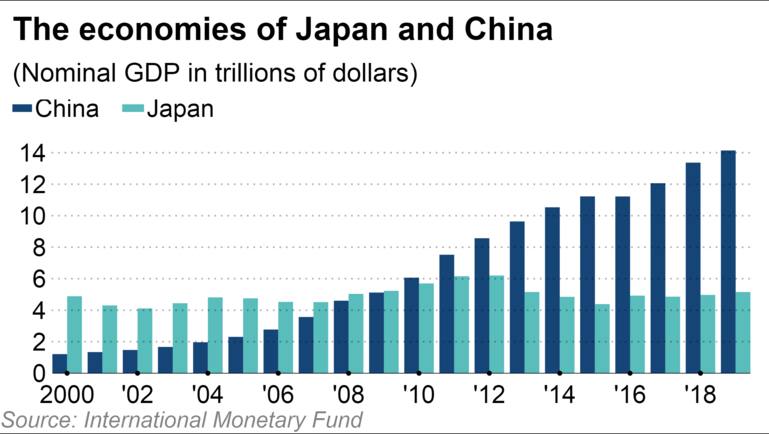 Manu Bhaskaran of Centennial Asia Advisors in Singapore expects Japan to be “a moderating force on [the] U.S. that is more isolationist and distracted,” adding that, “the U.S. is still needed as a balancing force in Asia against China.” Wan Suhaimie of Kenanga Investment Bank in Malaysia said that Japan should “forge a balanced relationship with China and the U.S. to ensure geopolitical stability in the Asian region.”

Randolph Tan of Singapore University of Social Sciences referred to Japan’s soft power, including technological achievement, which has attracted many young Chinese: “There is reason to be cautiously optimistic that Japan will temper the hostility in the Pacific arena, maintain a civilized approach to competition, and keep superpower rivalry from spilling over into actual conflict.”

The economists expect stronger cooperation between Japan and Asian countries to contribute to stability in the region under the new government. Somprawin Manprasert of Bank of Ayudhya in Thailand said that “strengthening regional cooperation” would be necessary “to cushion external shock from outside of the region, especially protectionism and deglobalization.” Lalita Thienprasiddhi of Kasikorn Research Center in Thailand stated that “Japan should cooperate with ASEAN and South Asia [India] to rebalance China’s power in the region.” Nicholas Mapa of ING Bank Philippines sees further cooperation in security, saying that the “security of the West Philippine Sea is now very important.” 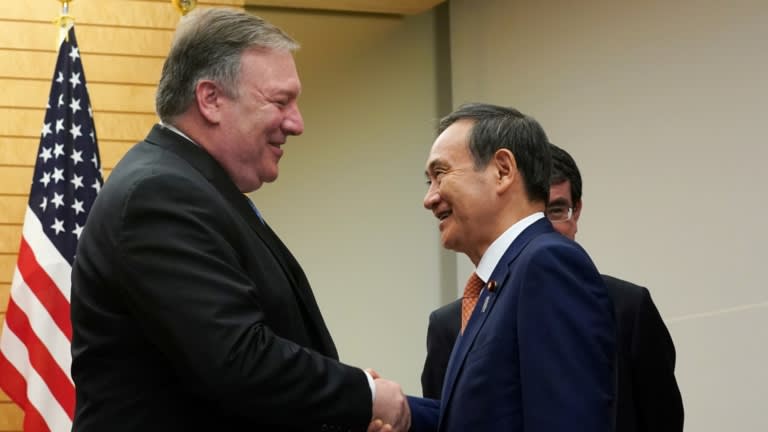 They also anticipate that Japan will serve as an “economic model” for Asian countries. In the late 20th century Japan was a front-runner in economic development and a model for Asian countries. But of course, the expectations for the new model differ from the ones presented decades ago.

Wan Suhaimie of Kenanga expects Japan to engage in “extending social security system reform,” adding that the revamped system “would be a great reference for other Asian economies.” Bhaskaran of Centennial Asia said that “Southeast Asia can learn much from Japan, especially on small and medium enterprises.” Bank of Ayudhya’s Somprawin expects Japan to lead in “frontiers/cutting edge technologies,” which would “support industrial reform in Asian countries.”

The analysts also expect a stronger Japanese economy and a recovery from the current recession. NSE’s Patnaik implied that Japan should pursue the good policies of Abenomics, the set of economic policies pursued during Abe’s administration. Strong growth “would help the global economy,” he commented, especially at a time when the world economy faces the challenge of the COVID-19 pandemic. The Japanese economy “is still the third largest in the world,” he added.

On the other hand, asked which policies and developments drew their attention over the nearly eight years of Abe’s tenure, many pointed to Abenomics. The prime minister launched “three arrows” — a combination of easy monetary policy, flexible fiscal policy, and growth strategy — in the first stage of his government, aiming to overcome prolonged deflation and increase the country’s economic growth rate. The Bank of Japan, the central bank, targeted an inflation rate of 2% and introduced unprecedented quantitative and qualitative monetary easing.

There were initial successes. The real economic growth rate increased from 1.5% in 2012 to 2.0% in 2013. The core CPI rate turned positive in 2013 and reached 2.6% in 2014 thanks in part to a hike in the consumption tax rate. But the economy did not return to a robust growth track in the following years. The inflation rate stayed at less than 1% after 2015. 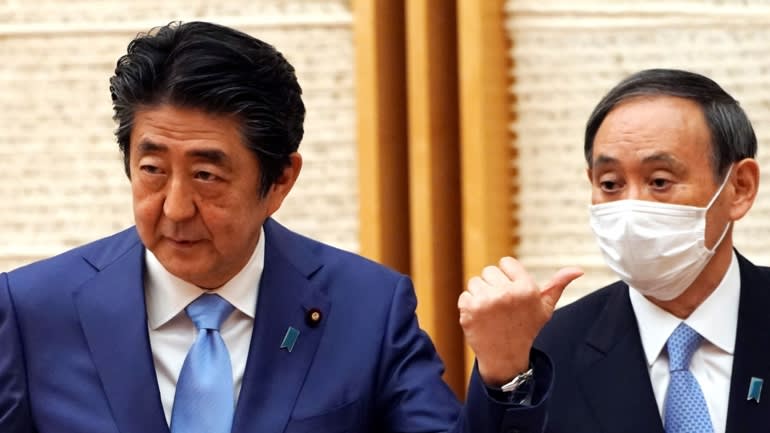 Prime Minister Shinzo Abe, left, gestures during a news conference where he announced an extension of a national state of emergency in response to the spread of the coronavirus as Suga, right, stands next to him at the Prime Minister’s Office in Tokyo on  May 4   © Reuters

Evaluations differed on the unprecedentedly accommodative monetary policy. Umar Juoro of the Habibie Center in Indonesia said that “easy monetary policy [did not] support growth” as had been expected. He also pointed out that “the inflation rate is very low.” Bank of Ayudhya’s Somprawin stated that the monetary easing policy was still “struggling with a deflationary spiral.” Wan Suhaimie of Kenanga focused on the Bank of Japan’s negative interest rate policy from 2016, saying that it “resulted in decreased inflation,” rather than increased inflation in the short and medium term.

But the situation surrounding monetary policy may not be so simple. The failure to achieve the inflation target and to spark strong economic recovery is the result of not only monetary policy, but also fiscal and other policies.

Evaluations of Abe’s growth policy were far from positive. Jonathan Ravelas of BDO Unibank in the Philippines stated that Abe “tried to revive Japan’s growth through reforms,” but “not all were successful.” Kasikorn Research’s Lalita said: “Abe’s government was not so successful at structural reform, especially [in promoting a] productivity revolution, which is important to medium- and long-term growth.”

Economists gave high marks to Abe’s policies to promote women’s participation in the labor market and to increase foreign workers. The employment rate of women between 15 and 64 years old rose from 60.7% in 2012 to 70.9% in 2019. The number of foreign workers expanded from 682,000 to 1.66 million over the same period.

Dharmakirti Joshi of CRISIL in India remarked that “efforts to improve women’s labor force participation under Shinzo Abe’s tenure have been commendable.” SUSS’s Tan stated that the increase of foreign workers “is especially significant in the context of globalization, and may be recognized in times to come as a watershed change.”

Abe’s foreign policy also received positive comments. Bhaskaran of Centennial Asia observed that Abe had shown a “more robust posture toward China” and commented that it was “a necessary move” and “helpful for regional stability in the long run.” SUSS’s Tan paid attention to Abe’s relations with U.S. Presidents Obama and Trump. “A deft foreign policy approach to two starkly different U.S. administrations will be recognized as one of Abe’s signature achievements,” he wrote.

More details of the survey, including a full list of respondents, can be found on the JCER’s website.