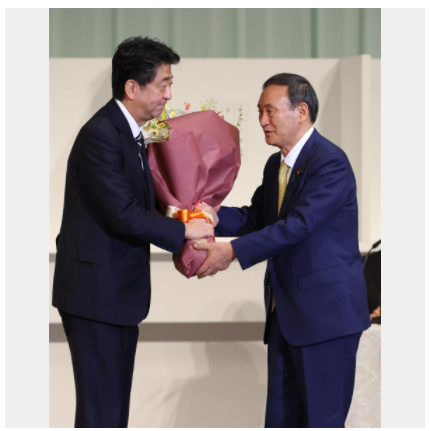 Chief Cabinet Secretary Yoshihide Suga was elected president of the Liberal Democratic Party (LDP) to succeed Prime Minister Shinzo Abe. The Suga cabinet will be launched after the nomination of the prime minister in the Diet on Sept. 16. More than two weeks after Abe announced his intention to resign, newspaper editorials on the LDP presidential election were sharply divided over the evaluation of the Abe government.

On Aug. 29, in response to Abe’s announcement of his intention to step down, the Sankei Shimbun published an editorial titled, “LDP must make Abe’s policies a launching pad” and the Asahi Shimbun ran an editorial titled “Abe’s departure must mark start of process to heal democracy.” Sankei generally acknowledged the achievements of the Abe government and argued that how to deal with the critical issues enumerated by the Abe government is a major point of contention in the LDP leadership race. But Asahi denied the Abe government accomplished anything and called on the next LDP leader to be determined to make changes.

Since its Aug. 30 issue, Asahi criticized each of the major policies of the Abe government, from Abenomics to diplomacy to education to support for women. It was also critical of “Abe Ikkyo,” the dominance of politics by Abe. The newspaper did not forget to mention the scandals involving Moritomo Gakuen, the Kake Educational Institution, and the annual cherry blossom viewing party hosted by the prime minister.

In the Sept. 3 issue, the paper wrote: “The administration of Prime Minister Shinzo Abe, which is the longest-running in the history of Japan’s constitutionalism, created a “poster boy” for the country’s diplomacy. But that did not produce matching results.” In the Sept. 5 issue, it stated: “Under Prime Minister Shinzo Abe’s leadership, big decisions, for better and for worse, were abruptly announced concerning education policy that caused great confusion among schools and teachers.”

In response to the selection of Suga to lead the LDP, the paper pointed out in its Sept. 15 issue: “The sudden change of the nation’s leader is taking place amid the new coronavirus pandemic. Suga, who has pledged to carry on the policy agenda of the Abe administration, may have been given a leg up by the general trend to prefer security over change at the moment. But Suga will struggle to push the nation forward instead of simply continuing the Abe administration’s policies if he becomes complacent about his political standing and fails to confront the policy failures the Abe administration has suffered.”

The Mainichi Shimbun wrote in its Aug. 30 issue: “What is of utmost necessity is to carefully probe and summarize the merits and demerits of the long-term government that lasted seven years and eight months since the launch of the second Abe cabinet. Short of that, the new government will not be able to move forward.” It also criticized the Abe government, saying: “The Abe government muscled its way forward as if to say that all of its policies should be trusted because it had won elections,” and “It is safe to say that the continuation of its ‘method of division,’ whereby the Abe government instigated conflicts by not lending an ear to objections and criticism but fiercely attacking opponents, is a baneful effect of Abe politics.”

The Tokyo Shimbun also published a series of articles with the title “Investigation of Abe politics.” Day after day it criticized the Abe government by taking up each of its individual policies, including Abenomics, diplomacy, education, and social security, as well as the political style and discussions on constitutional amendment.

Sankei made a request to new LDP leader Suga in its Sept. 15 issue: “We must point out that Suga will assume the premiership under the most severe circumstances both at home and abroad since the end of World War II. We hope he will be aware that he is a `prime minister standing at a crisis point’ and exercise leadership.”

Sankei particularly emphasized the settlement of the abduction [of Japanese nationals by North Korea] is an issue he should assume from the Abe government. The Abe government called it “the most important and the top priority issue” but failed to produce results. Abe, at a press conference to announce his resignation, said that was “extremely regrettable.” Sankei stated in its Aug. 31 issue: “A change of prime minister should not lead to the suspension of the fight to bring abductees home. More importantly, we must not let North Korea think that the fight can be suspended. The new prime minister should be as passionate as Abe or even more passionate than him about settling the abduction issue.”

The Yomiuri Shimbun wrote in its Sept. 9 issue: “The biggest achievement of the Abe administration was to have stabilized politics. The new administration should also build a solid political foundation and carry out its policies decisively.” The paper also said that halting the spread of the novel coronavirus and restoring peace of mind in daily life as well as leading the economy to medium and long-term stable growth are urgent tasks.

It is difficult to foresee the future of the international situation with the escalation of the confrontation between the U.S. and China and the U.S. presidential election just around the corner. The new government must prepare itself for a tough start.