TOKYO — Japan’s new Prime Minister Yoshihide Suga said on Wednesday that regulatory reform will be a top priority for his new government, while he focuses on tackling immediate problems facing the public, such as the coronavirus and the pandemic-induced recession.

Suga appointed Taro Kono as minister in charge of administrative reform, making him his point man for government and regulatory overhaul.

Kono, who most recently served as previous Prime Minister Shinzo Abe’s defense minister, has a reputation for calling out wasteful government spending. Suga said any issues of government red tape and sectionalism will be addressed by Kono’s office.

“Regulatory reform is at the center of my administration,” Suga said. “My cabinet is here to work for people. We will overcome vested interests and revamp government regulation.”

Suga cited his own track record of cutting through administrative red tape. As chief cabinet secretary under Abe, he helped increase tourism to Japan by pushing for relaxed visa rules despite opposition from police, and lowered mobile phone rates by putting pressure on big wireless carriers. Administrative Reform Minister Taro Kono speaks at a press conference at the Prime Minister’s Office in the early hours of Sept. 17. (Photo by Kento Awashima)

Speaking at a late-night news conference, Kono said his challenge will be to undertake “regulatory reforms that create value” for the public during his latest turn in the post. When Kono last held the reform portfolio, in 2015 to 2016, he sought to “cut government waste,” he said.

The avid user of social media emphasized the importance of speed in changing the way government works, citing the “endless” news conferences by ministers each time a new government takes office as an example of “an overemphasis on precedent.”

“This is something we should get rid of fast,” Kono told reporters.

Japan’s rates “are at a high level compared with other countries,” Takeda told reporters, adding that he will seek “to provide a fair competitive environment.”

Suga has said he will create a new government agency to coordinate digital policy, tasking it with upgrading the nation’s high-tech capabilities.

He was elected prime minister in a parliamentary vote on Wednesday, marking a new chapter in the nation’s politics after a record seven years and eight months under Abe. 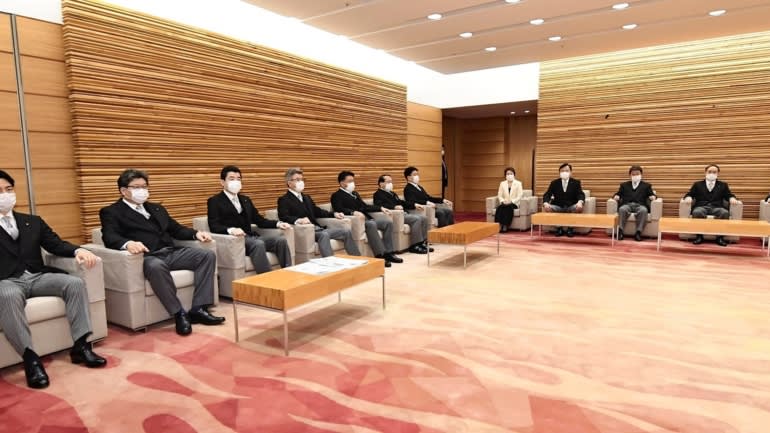 The Suga administration holds its first cabinet meeting at the Prime Minister’s Office on Sept. 6.   © Kyodo

Suga, 71, will confront the immediate challenges of keeping COVID-19 under control, jump-starting the economy and paving the way for Tokyo to host the delayed Summer Olympics next year. His selection after years as Abe’s right-hand man is seen as a move to ensure a smooth transition of power and avoid a policy vacuum in the middle of the pandemic crisis.

“What people are looking for from the new government is to bring the coronavirus under control and get the economy back on its feet. Now that the new cabinet is in place, I’d like to devote myself to addressing those challenges,” Suga said in his first news conference following his election as the country’s leader.

But the new prime minister appears intent on being more than a caretaker.

Suga has vowed to accelerate a structural overhaul of the economy — a job Abe left unfinished. “I will push ahead with deregulation and put an end to ministry sectionalism, vested interests and the practice of blindly following past precedents,” he has said.

Abe may be tough act to follow, however. He led the ruling Liberal Democratic Party to six consecutive national election victories and stopped what had been a “revolving door” to the prime minister’s office, with one leader quickly replacing another. The merits of his Abenomics economic reforms are hotly debated, but few would deny that he raised Japan’s international profile.

Suga orchestrated some of Abe’s key policies but has little diplomatic experience and lacks his predecessor’s strong support base within the LDP. Unlike most politicians who reach the top, he does not belong to any of the ruling party’s factions.

Nevertheless, Suga cruised to victory in the LDP’s presidential election on Monday and received a majority of the votes in the lower house of parliament on Wednesday, elevating him to prime minister. Abe, who abruptly announced his resignation on Aug. 28 due to chronic health issues, formally stepped down Wednesday morning. The new cabinet, which Suga unveiled after the less-powerful upper chamber voted on his appointment, reflected the dual goals of maintaining continuity and sparking new initiatives — though critics have already pointed out that the lineup includes few women or younger members.

A new addition to the cabinet is Nobuo Kishi, Abe’s younger brother, as defense minister. Asked about his past comments on the possibility of Japan becoming a nuclear-armed nation, Kishi said as a cabinet member he believes “by no means will our country possess nuclear weapons.”

He cited Japan’s experience as the only nation to suffer an atomic bombing and its longstanding three principles of not possessing, not producing and not allowing the introduction of nuclear arms.

Looming over everything is the prospect of a general election. Lower house members are entering the final year of their four-year terms next month. With the LDP riding an upswing in public support, speculation is rampant that Suga will call for polls soon.

For now, the new prime minister has said he is focused on the public’s pressing concerns about the pandemic and the economy — not elections.