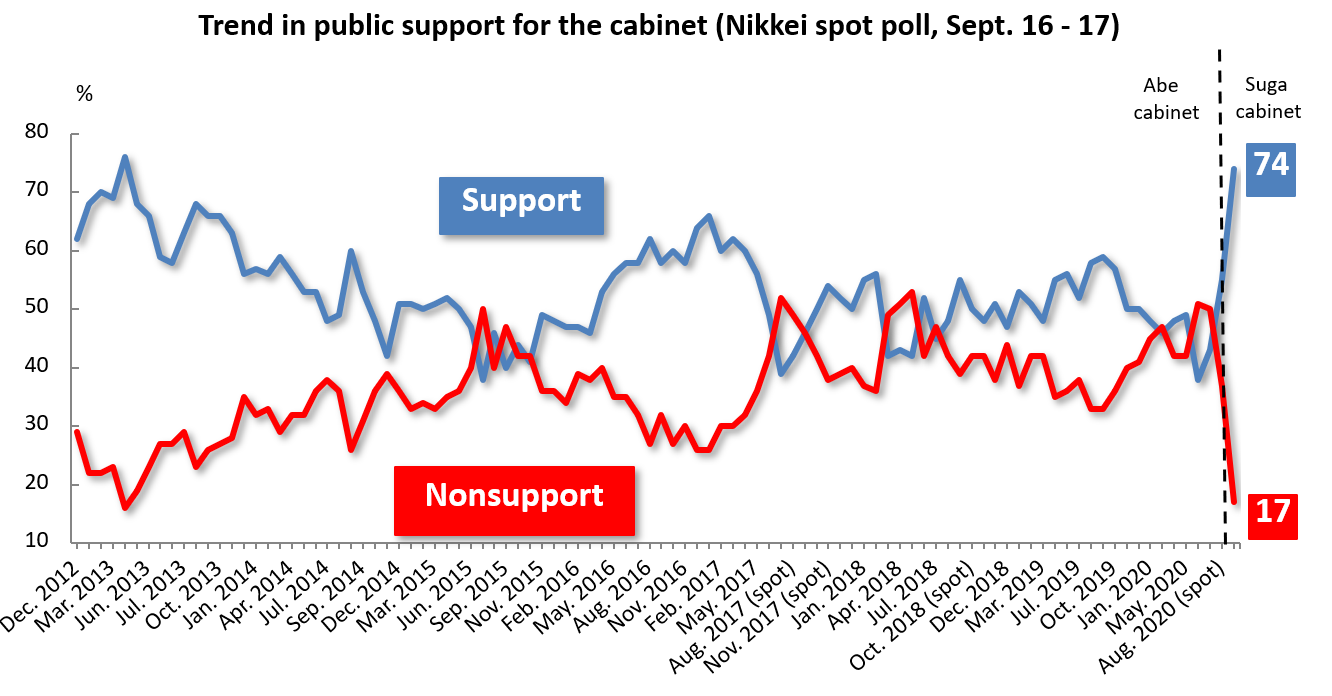 TOKYO — Public support for Japanese Prime Minister Yoshihide Suga’s new government comes in at 74%, the third-highest result for any cabinet at its debut, a snap Nikkei/TV Tokyo poll shows.

This makes Suga, who took office Wednesday, the country’s most popular new leader since Yukio Hatoyama in 2009, an analysis of past poll data shows.

Suga tops the most recent approval rating of his predecessor, Shinzo Abe, by 19 percentage points. He scores higher than Abe on trustworthiness and, in another difference from his predecessor, polls better among women than men. 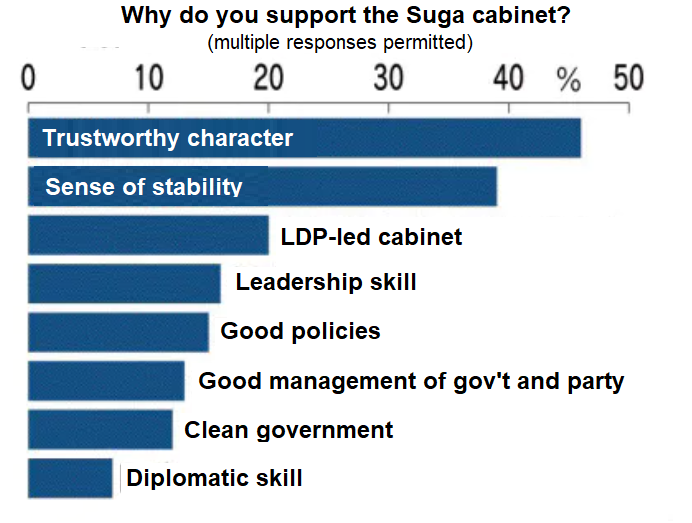 The most common reason given for supporting Suga’s government is a “trustworthy character,” cited by 46% of respondents. During his run for leadership of the ruling Liberal Democratic Party, Suga often mentioned his upbringing as the son of a farmer in northern Japan’s snowy Akita Prefecture.

This contrasts with views on Abe, whose government voters favored more for its stability than his character. Abe polled in the 10% range for trustworthiness in recent years.

A sense of stability ranks second among likely voters’ reasons for supporting Suga’s government, at 39%. He served as Abe’s chief cabinet secretary for seven years and eight months — the longest tenure of any Japanese prime minister. Suga was the government’s point man for crisis management and its face for major announcements, including the declaration of a new Imperial era.

Diplomatic skill is one characteristic where Suga lags Abe in voter perceptions. The new government scores only 7% on this point, compared with more than 20% for globe-trotting Abe’s cabinet.

The Suga government’s disapproval rating comes in at 17%, down 20 points from the most recent reading for Abe’s cabinet. The top reason given for disapproval is that the government is led by the LDP.

Suga polls 77% approval among women, compared with 72% among men. Among respondents ages 18 to 29, 87% express support for Suga.

The highest start for a new Japanese government in data going back to 1987 was achieved by then-Prime Minister Junichiro Koizumi, who polled 80% in 2001. Hatoyama, who led the opposition Democratic Party of Japan to power in 2009, comes next at 75%.

Abe scored 62% in his 2012 return to the prime minister’s office, when the LDP regained power.