Suga Cabinet kicks off with approval rating of 65%, Asahi survey 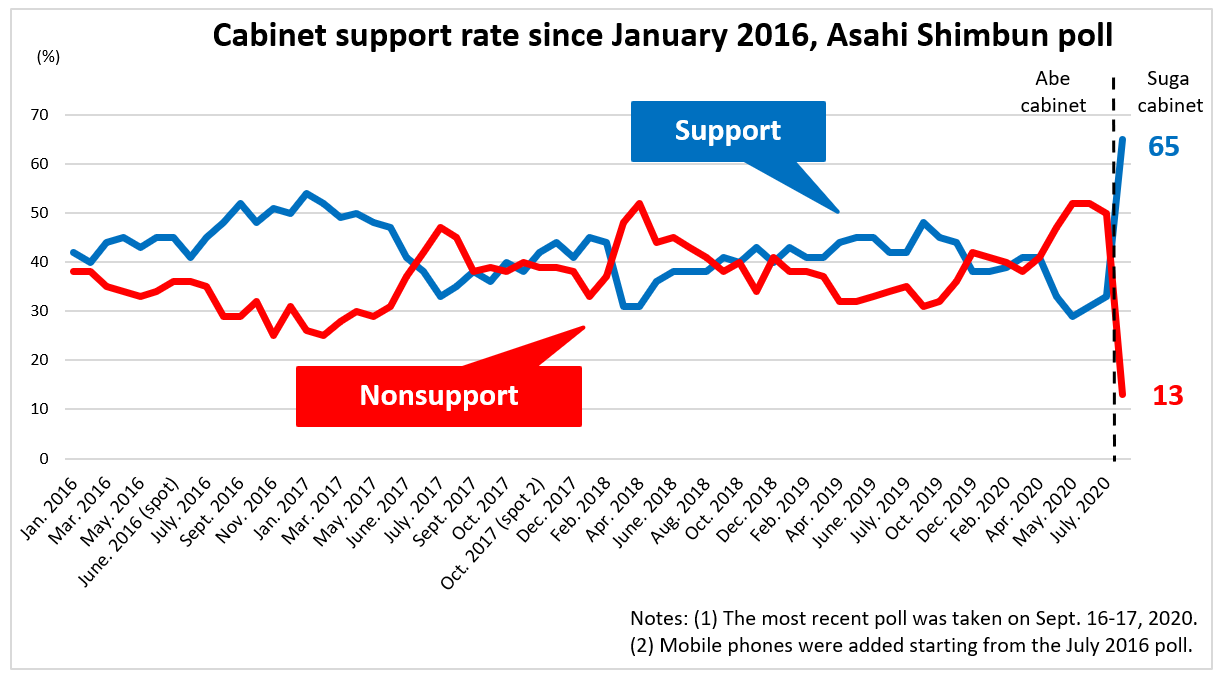 Prime Minister Yoshihide Suga’s new Cabinet received an approval rating of 65 percent, with many voters giving the familiar reason of “better than the alternatives” for their support, an Asahi Shimbun survey showed.

The telephone survey, conducted on Sept. 16 and 17 immediately after the Suga Cabinet was inaugurated, showed a disapproval rating of 13 percent. 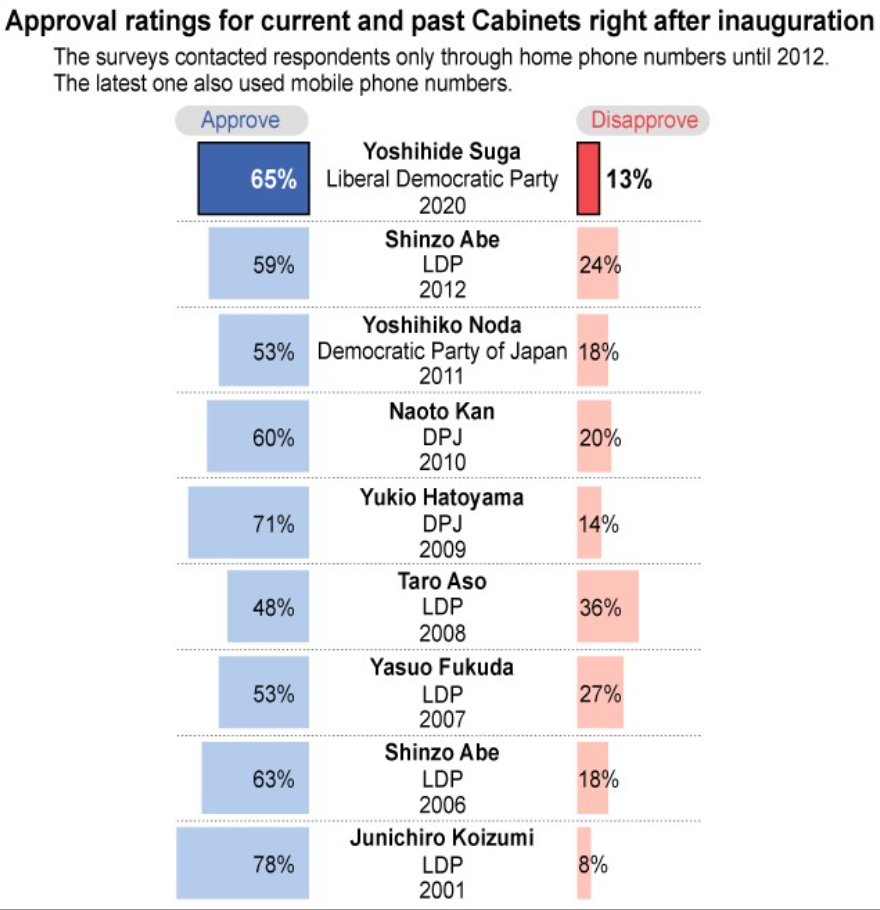 The support rate was higher than the 59 percent given to the Cabinet formed by Shinzo Abe when he started his second stint as prime minister in December 2012, although a simple comparison is not possible because the surveys used different methods.

The Suga Cabinet was approved by 68 percent of female respondents and 62 percent of men, marking a contrast with the Abe Cabinet, which had consistently enjoyed a higher support rate among male voters.

In addition, support for the Abe Cabinet was buoyed largely by those in their 30s or younger. The Suga Cabinet garnered approval from more than 60 percent across all age groups.

Those who approve of the Suga Cabinet were asked to select one of four reasons for their support.

Forty-one percent, the highest ratio, chose “it appears better than the alternatives,” followed by “Suga is prime minister” at 23 percent, “its policies” at 20 percent, and “a majority of its members are Liberal Democratic Party lawmakers” at 14 percent.

More people had picked “better than the alternatives” for their support of the Abe Cabinet.

Suga topped Abe in the choice of “because he is the prime minister.”

Suga said his Cabinet will place top priority on measures to prevent the spread of the novel coronavirus.

While 63 percent of respondents said they “have high hopes” for his response to the COVID-19 pandemic, 22 percent voiced skepticism.

Suga has also indicated that he will largely follow the policies set by his predecessor, and he retained more than half of the members of the Abe Cabinet.

Fifty-eight percent of respondents favored that decision for the lineup, compared with 24 percent who disapproved of the move.

But 50 percent said the economic policies formulated by Abe “should be reviewed,” while 37 percent said Suga should continue with “Abenomics.”

Even among those who support the Suga Cabinet, 42 percent said the economic policies “should be reviewed.”

The Abe administration was plagued by a series of scandals, including suspected favoritism to the Moritomo Gakuen private school operator and the Kake Educational Institution, as well as growing expenses and now-missing guest lists for publicly funded cherry blossom viewing parties.

Although Abe announced his resignation in late August for health reasons, the public still wants answers to those scandals.

Fifty-four percent of respondents said Suga “should push for” further investigations into the scandals, while 36 percent said “there is no need” to do so.

More than 60 percent of respondents in their 60s or older want reinvestigations, but half of those in their 30s or younger said further probes are unnecessary.

The Asahi Shimbun contacted eligible voters through home phone or mobile numbers selected at random by computer and received 1,266 valid responses in total.