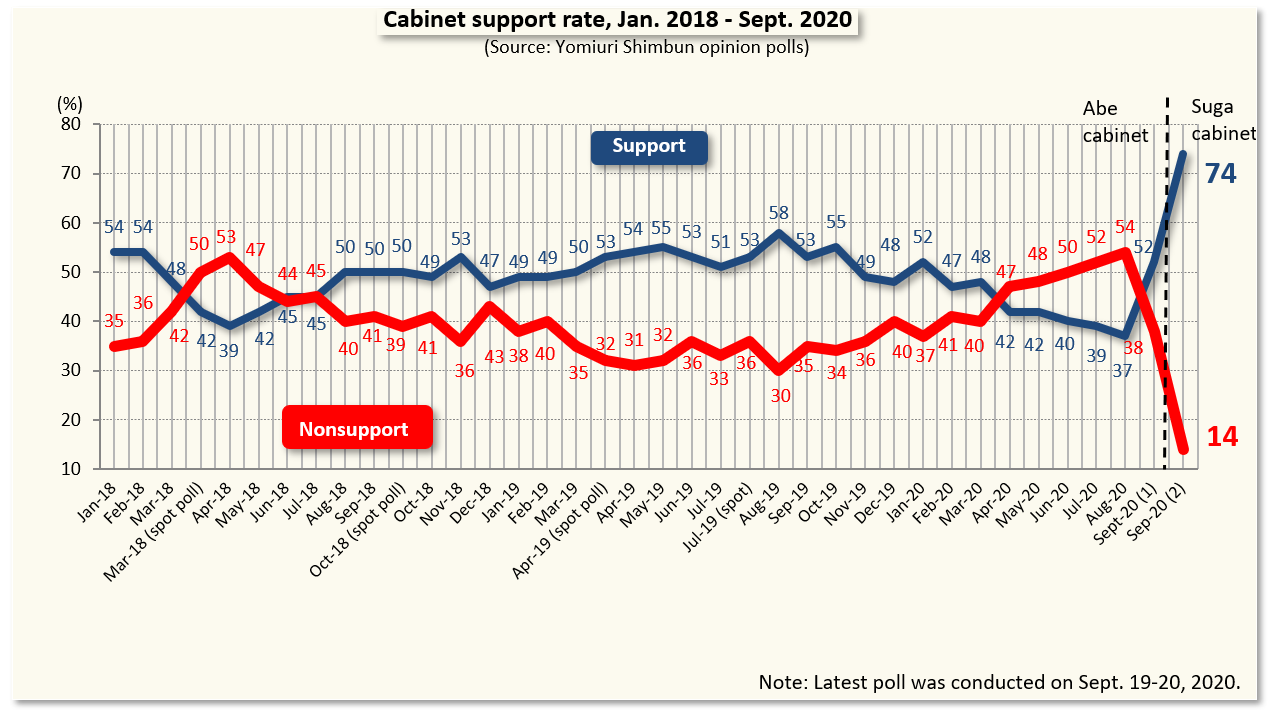 The initial approval rating for Prime Minister Yoshihide Suga’s Cabinet stood at 74%, the third highest among similar polls taken on the heels of Cabinet inaugurations since 1978. The Yomiuri Shimbun conducted the nationwide opinion poll on Saturday and Sunday.

The disapproval rating for Suga’s Cabinet was 14%. Suga’s stance of carrying on the policy measures and policy line pursued by predecessor Shinzo Abe was met with approval by 63% of respondents, and with disapproval by 25%.

Although the options for respondents partly differed, among the respondents who approved of the Abe Cabinet in its last days, the reasons selected of they could expect good things of his policies and they can trust Abe were both under 10%. For the Suga Cabinet, affirmative reasons for approving of the cabinet have increased.

The Suga Cabinet has 15 ministers who are either from the previous Abe Cabinet and reappointed by Suga or who have held a cabinet post before. Five have received their first Cabinet post. The respondents who rated such appointments highly stood at 62%. Those respondents who highly rated the appointment of Taro Kono as minister in charge of administrative reform and regulatory reform stood at 77%. Meanwhile, those who did not highly rate the reappointment of Taro Aso as deputy prime minister and finance minister stood at 53%, compared with those who rated it highly at 39%.

Regarding policies and tasks that respondents want the new Cabinet to prioritize in tackling, measures to cope with the novel coronavirus was chosen by 34% of respondents, the highest, followed by those related to the nation’s economy and employment chosen by 23%.

Meanwhile, 59% of respondents said there is no need for the House of Representatives to be dissolved for a general election before the expiration of the lower house’s term, up from 55% when a similar poll was taken Sept. 4-6. Those respondents who said they want the lower house election to be held sometime in the early half of next year stood at 21%, compared with 20% in the previous poll, and those who said sometime within this year stood at 13%, compared with 16%.

When asked how long they want Suga to serve as prime minister, 32% of respondents said they want him to stay in office until his presidency of the ruling Liberal Democratic Party ends next September. Meanwhile, those who want him to stay in office even longer than that came to a combined total of 60%, with those saying “as long as he can” at 28%, “for about three years” at 16% and “for about two years” at 16%.

The support rate for the LDP rose to 47%, compared with 41% in the previous poll, the second highest for the party after the 48% registered in April 2013 when the second Abe Cabinet logged its highest approval rating of 74% after being launched in December 2012.

The main opposition Constitutional Democratic Party of Japan had a support rate of 4%, unchanged from the previous poll, taken before the party merged with another opposition party to form an enlarged party, with the merger showing no apparent impact. Those respondents who said they have no party affiliation stood at 37%, compared with 40% in the previous poll.

While the Suga Cabinet’s 74% approval rating does not exceed the enthusiasm that greeted the Junichiro Koizumi Cabinet in 2001 and the Yukio Hatoyama Cabinet in 2009, when the government changed hands from the Liberal Democratic Party to the Democratic Party of Japan, it seems that the public hopes for the continuation of Abe’s policies and sound policy implementation amid the coronavirus crisis.

If limited to those who positively regard Suga’s stance of following Abe’s policies (63% of the total), the approval rating reaches 88%. Among those who negatively view this stance, 41% support Suga and 47% do not, showing that a certain percentage of even those who oppose Suga’s following of Abe’s policies accounted for some of the support.