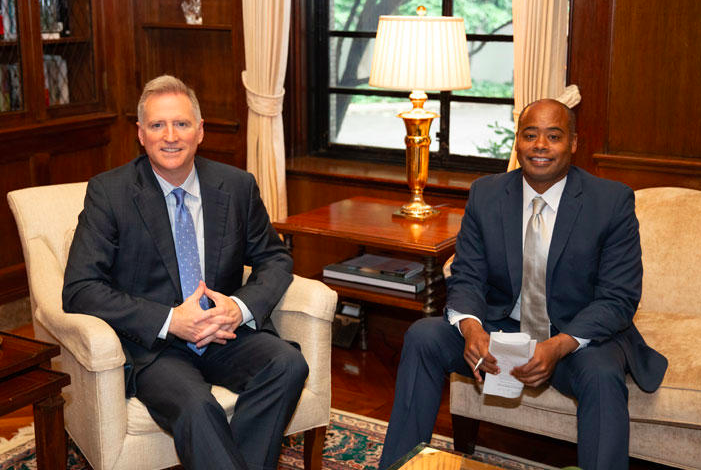 In an interview with Newsweek, the U.S. Chargé d’Affaires and the NASA Asia Representative shed light on recent developments in outer space, from the Trump administration’s space policy, space debris, and Japanese ventures, to the arms race in space.

Space exploration is gathering global momentum. This summer successive launches of Mars explorers by the U.S., China, and the UAE (United Arab Emirates)–which used Japan’s H2A rocket–displayed their appetite for space exploration. The biggest space-related news, however, was the flight of Crew Dragon, which was developed by the U.S. space venture SpaceX. The spacecraft took off in May and successfully completed its mission of taking astronauts to the International Space Station (ISS).

It was the first time a manned U.S. spaceship flew to the ISS since the termination of the Space Shuttle program nine years earlier. It was also the first time ever that such a mission was conducted by a commercial enterprise. More than anything else, the event signaled the return of the U.S. as a leader in space exploration. What has fueled the recent enthusiasm for space exploration by the military as well as the civilian sector in the U.S.? What role does the U.S. expect Japan to play in space? We sat down with U.S. Chargé d’Affaires Joseph Young and NASA (U.S. National Aeronautics and Space Administration) Asia Representative Garvey McIntosh to seek answers to these questions.

President Donald Trump has put emphasis on space development since the inauguration of his administration. Chargé Young explains: “First of all, the President is personally interested and enthusiastic about space exploration. He also wants to promote the American business presence in space where there has been a steady growth in commercial activity.” The success of Crew Dragon was made possible by an increase in private-sector participation that began during the Obama era. Nonetheless, in May, President Trump took time from his busy schedule to watch the launch of the spacecraft from the Kennedy Space Center. It was a demonstration of his enthusiasm for signaling “America First” in space, meaning “America comes first” and “America wins first place” in space exploration.

In addition to establishing the Space Force, the Trump administration announced the Artemis space program, which is descended from a Bush administration initiative (later suspended by the Obama administration) to send manned vehicles to the Moon and Mars. Chargé Young explained that the moves are “part of the President’s effort to enhance America’s space presence in all areas.” The Chargé also offered the candid assessment that the President’s motivation likely includes consideration for his legacy. “It is probably important for the President that when people look back on the Artemis program many years from now, they see it as his legacy–that reaching Mars was the Trump administration’s achievement,” Chargé Young said.

The Obama administration cancelled the Constellation program, which aimed to send manned flights to the Moon, mainly because of its high price tag. NASA Representative McIntosh said that since the inauguration of the Trump administration, NASA’s budget and government support for the agency have been growing every year. He said: “President Trump signed Space Policy Directive 1 in 2017 (which became the foundation for the Artemis program). It clarified the future path for NASA, which is to go to the Moon, then to Mars.” Chargé Young added: “The government expects the scope of the private sector’s services in low earth orbits (orbits less than 2,000 kilometers above the Earth) will grow, freeing up government resources for deep-space exploration efforts, including missions to the Moon and Mars.”

What role does the U.S. expect Japan to play?  Chargé Young said his government regards “cooperation in space as a pillar of the Japan-U.S. alliance.” He pointed out, “The U.S. and Japan have been cooperating in space for the past 50 years. Japan has excellent technologies, and it is the second largest free economy in the world. Japan is America’s natural partner in space exploration.”

The most recent example of cooperation between the two countries is the Artemis program. The program began as an international project involving Canada, the EU, others and has been moving forward. In July, NASA issued a joint statement with Japan’s Ministry of Education, Culture, Sports, Science and Technology that stipulated Japan’s role in the project, including a plan for a Japanese astronaut to land on the Moon. The statement also put forward a blueprint where Japan would be in charge of logistics and construction of living quarters for the space station “Gateway,” which will be built in orbit around the Moon to support the Mars exploration.

Chargé Young suggested that some well-established Japanese companies with many years of experience may participate in the Artemis program, including IHI, Mitsubishi Heavy Industry, and Kawasaki Heavy Industry. In addition, the U.S. government is looking into the inclusion of up-and-coming Japanese ventures in the program.

“For example, ispace manufactures small lunar rovers as well as measuring devices for use on the Moon. Axelspace makes small satellites. And Astroscale is a space-debris removal business (*All three companies are space ventures headquartered in Tokyo).” The Chargé ticked off the names of these Japanese ventures from memory, evidencing the United States’ high expectations for Japanese companies with niche expertise.

Japan is regarded as the leader in removal of space debris. Expired satellites, fragments of rockets, and other debris are orbiting the Earth. Its removal is of critical importance as it might collide with satellites or the ISS and inflict great damage. The majority of the debris is from obsolete American and Russian space vehicles, but there is a growing amount of Chinese debris as a result of its tests of anti-satellite weapons. The Astroscale and Japan Aerospace Exploration Agency (JAXA) are scheduled to conduct the world’s first joint demonstration of the removal of large items of space debris. Meanwhile, the Japanese government and the UN Office for Outer Space Affairs have signed a joint statement for promoting international awareness of space debris.

Chargé Young said, “The White House is carefully monitoring the issue of the space debris.” In 2018, a presidential directive placed the Department of Commerce in charge of debris and other materials left in space. “We must address the debris problem,” he added, “considering that commercial activity is likely to grow in the domain of low-Earth orbits. There is room for operation with Japan in identifying, tracking, and removing the debris in that domain.”

The debris is by nature partly a military issue. That is the case with Chinese debris. NASA Representative McIntosh says that the two major issues facing his organization are the increasing amount of debris produced by robust space activities and the advent of military activities in space. Chargé Young agreed that “there is a concern that Russia and China are developing space capabilities for military purposes.” In an attempt to simultaneously address military and non-military issues, Japanese and the U.S. defense authorities are undertaking a project to mount American sensors on Japanese satellites to monitor changes in the situation in space including debris.

The U.S. is not asking Japan to join in its quest for the space hegemony at this time. Chargé Young stressed that the Outer Space Treaty, which calls for the peaceful use of space, remains in force. The treaty was ratified by 110 nations including Japan, the U.S., and China and put in effect in 1967. According to the CDA, the U.S. highly regards Japan’s cooperative diplomacy toward space, including its efforts in the U.N. Committee on the Peaceful Use of Outer Space. The CDA said: “Japan is viewed as one of the most effective players in the multilateral arena. When we promote international cooperation in space, Japan’s participation engages others, because Japan has built relationships with a broad range of nations. We hope that Japan’s participation will have a positive ‘amplification effect.’”

There is, however, a dilemma of sorts. If Japan elects to have the Self-Defense Forces cooperate more closely with the U.S. military in space, its unique “amplification” effect might disappear. The old dilemma on Earth is spilling into outer space, where only a short time ago such political-military problems were irrelevant. From security to economy, space-related policies are becoming increasingly intertwined with those on Earth. In space, Japan may not be able to remain neutral much longer.

Beyond technological coordination, to what degree should Japan cooperate militarily with the U.S. in space? In the rapidly evolving domain of space, Japan may not have too much time to ponder the question.