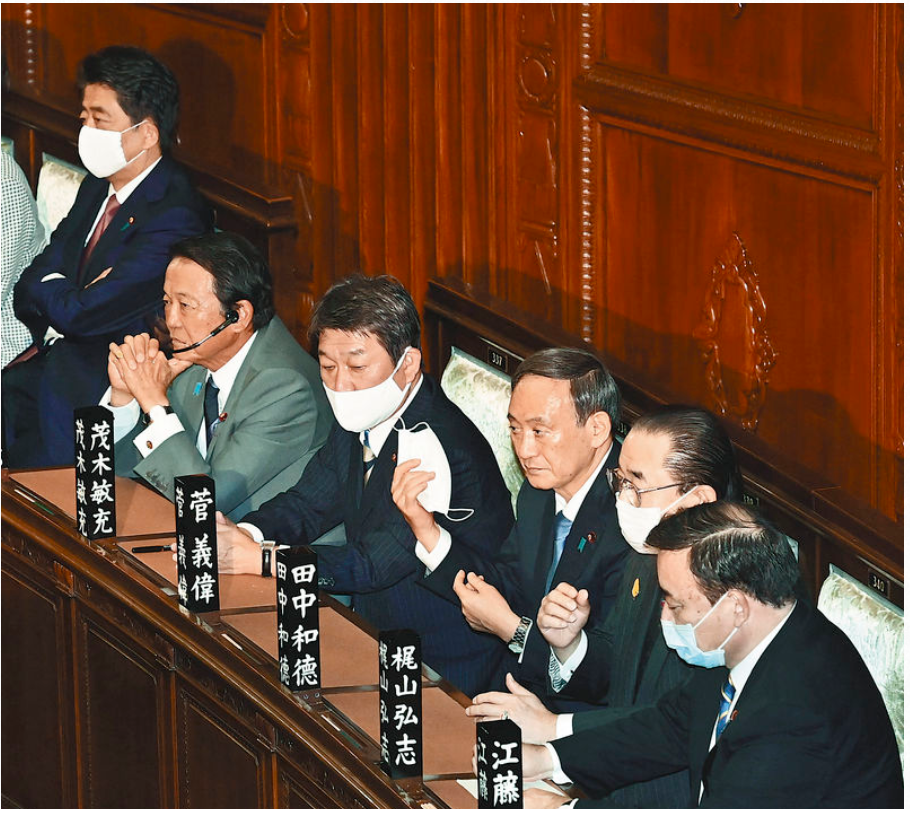 The Yomiuri Shimbun / Yoshihide Suga removes a mask during a plenary session of the House of Representatives on Wednesday afternoon, just before his appointment as prime minister.

Prime Minister Yoshihide Suga was in full gear on Thursday, the day after his Cabinet was launched. He met separately with Taro Kono, the minister in charge of administrative and civil service reform, Takuya Hirai, the minister for digital transformation, and Norihisa Tamura, health, labor and welfare minister, going through his key policies with each of them.

The prime minister asked Tamura to compile measures that will make it easier for people to take PCR tests conducted by private institutions for the novel coronavirus, which are not covered by the national health insurance.

“I would like you to consider how to lower prices,” Suga reportedly said.

The most imminent issue for the new Cabinet is how to deal with the coronavirus pandemic. At a press conference on Wednesday, the prime minister declared that preventing the spread of infections and reviving the economy are “my assigned missions.”

However, there are many unknown factors, making it difficult to chart a course of action. The prime minister spearheaded the Go To Travel domestic tourism campaign to help rebuild the economy, but the main precondition for moving forward with this plan is limiting the number of severe coronavirus cases and deaths.

To prepare for the winter season when infectious diseases are more prevalent, the government must ease public fears by implementing a policy package that has been compiled to improve testing capacity and strengthen the medical system.

Suga demonstrated his ability to manage crises when he was the chief cabinet secretary in former Prime Minister Shinzo Abe’s administration. At the same time, however, he was also partly responsible for the government’s sluggish response to and mismanagement of the pandemic. Based on the lessons learned so far, the power of words will be essential to winning over the public.

Abe established a long-running government that lasted for seven years and nine months, bringing political stability to the country. Suga played a major role in supporting the administration, but whether he can lead the nation is yet to be seen.

While Suga is good at handling specific issues, such as demolishing bureaucratic sectionalism among ministries and agencies, compared to Abe he “lacks a clear sense of the nation,” according to a high-ranking government official.

Opinion polls conducted by several media outlets show that more than 60 percent of voters support the new Cabinet. However, as Suga does not belong to a faction in the ruling Liberal Democratic Party, he does not have a strong foothold.

A former Cabinet minister and others have said that the prime minister should dissolve the House of Representatives and hold a snap election as soon as possible to gain momentum to implement the government’s policies.

Suga has expressed caution about dissolving the lower house before the coronavirus crisis has been resolved. However, he met with an experienced election campaign planner on Thursday, fueling speculation in political circles of an imminent dissolution.

Regarding the lineup of his Cabinet, which includes many members who retained roles or were appointed to equivalent positions, Suga reportedly told his aides, “it’s a Cabinet with the best officials,” expressing confidence that the new administration will be able to overcome the coronavirus crisis and realize reforms. Should the prime minister wait until results are delivered, or should he make the first move to achieve them?

Suga’s term as party president will run for one year, until September 2021, and the terms of members of the House of Representatives will expire in October of that year. While aiming to establish a solid and stable government, Suga has 12 months to find the right moment to play his dissolution card.