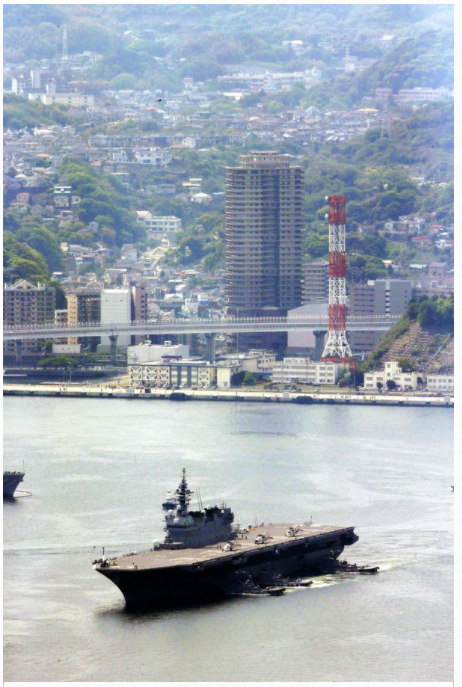 The Yomiuri Shimbun / The Japanese Maritime Self-Defense Force destroyer “Izumo” is seen in Yokosuka, Kanagawa Prefecture, as it leaves on a mission to protect U.S. vessels, in a May 1, 2017, photo taken from a Yomiuri Shimbun helicopter.

Saturday was the fifth anniversary of the enactment of a set of new security laws. Amid an increasingly severe security environment, including China’s maritime push and North Korea’s nuclear and missile development programs, the Self-Defense Forces have carried out missions under the new laws, such as the protection of U.S. vessels, that have helped strengthen the Japan-U.S. alliance.

“The Japan-U.S. alliance has become stronger than ever due to the security laws, and Japan’s defense, deterrence, and response capabilities have been improved, thus contributing to regional peace and stability,” Chief Cabinet Secretary Katsunobu Kato told a news conference on Friday.

Defense Minister Nobuo Kishi also emphasized at a press conference the same day, “Japan has built up a record of duties based on the security laws, such as the protection of weapons and other [equipment of friendly the friendly countries].”

The security laws allow the SDF to protect U.S. vessels and engage in minesweeping. As part of its international contributions, including U.N. peacekeeping operations, Japan is now able to take on missions such as coming to the rescue of personnel from the United Nations or other organizations who are under attack from armed groups.

“The enactment of security laws strengthened the relationship of trust between Japan and the United States,” Kishi said at his press conference.

To protect foreign military forces engaged in activities that contribute to the defense of Japan, it has become possible for the SDF to use weapons in the “protection of weapons and others.” This has greatly contributed to confidence-building.

Times when Japan protected U.S. vessels and aircraft engaged in joint exercises and intelligence gathering, including those on the lookout for ballistic missiles, increased from two cases in 2017 to 16 cases in 2018 and 14 cases in 2019. According to government sources, the SDF protected U.S. bombers and supply ships in areas including the Sea of Japan.

China is increasing its presence in the East and South China Seas. Japan and the United States have been stepping up joint exercises to counter such moves.

The need to protect weapons and others is increasing. Prior to the enactment of the security bills, the SDF were unable to protect U.S. vessels that were protecting Japan, and the unilateral nature of such duties under the Japan-U.S. alliance was sometimes criticized.

Katsutoshi Kawano, former chief of staff for Joint Staff of the SDF, said in a speech on Sept. 7, “Japan was protected [by U.S. forces] but was not able to provide protection in return when requested by the United States. Due to the security laws, Japan became able to do the right thing, and Japan was thanked by the U.S. side.”

By the end of 2019, There had been 20 occasions when Japan had provided fuel to U.S. vessels responsible for dealing with ballistic missiles, in line with the security laws.

It has also become possible for Japan to participate in “internationally coordinated operations for peace and security,” such as humanitarian and reconstruction assistance not overseen by the United Nations.

Accordingly, since April 2019, Japan has dispatched two Ground Self-Defense Force personnel to the Sinai Peninsula in eastern Egypt as headquarters personnel for the Multinational Force an Observers (MFO) mission.