TOKYO — After over half a year of managing All Nippon Airways’ ground operations at Haneda Airport amid a pandemic, heightened sanitation and social distancing have become so routine for Mariko Kumita and her team that, as she says, “I am starting to feel like I’m forgetting what used to be normal.”

The situation is a far cry from the scramble in January, when ANA sent a flight to repatriate Japanese citizens from Wuhan, the Chinese city that was the coronavirus epicenter. Back then, a terminal typically used for domestic flights had to be reconfigured with immigration and customs checkpoints in under 48 hours.

Since then, the airline has increased the number of check-in counters to keep travelers adequately spaced. Plastic sheets hang between airport staff and passengers, and interactions between cabin crew and ground crew are kept to a minimum. At every stage of check-in, travelers are asked to disinfect their hands.

“All the staff have completely altered their level of consciousness for disinfection and safety, so I hope the customers can be relaxed,” said Masahiro Tsurukawa, the station manager for ANA’s operations in Wuhan.

Both Tsurukawa and Kumita said their airline’s coronavirus measures make them feel safe at work every day.

But the same is not true of passengers, who have yet to return to the air in large numbers. Much of that is due to country travel restrictions — but resurgent virus cases throughout the region have also led people to question their desire to fly amid anxiety over infection. A crew that operated one of ANA’s Wuhan repatriation flights, including Masahiro Tsurukawa and Mariko Kumita (center), received a commendation from Foreign Minister Toshimitsu Motegi. (Photo courtesy of ANA)

Airlines such as ANA have been consistently attempting to lure back travelers with their new health standards — aware that their own financial well-being is at stake. ANA Holdings posted a net loss of 108 billion yen ($1.03 billion) for the three months from April through June — the worst since it started unveiling its quarterly performance in fiscal 2003 — and furloughed around 43,500 employees.

But the question for carriers is whether the new health practices on the ground and in the air are sufficient to make passengers fly again with confidence.

Japan Airlines, a rival of ANA, this month said it would implement all of its infection prevention measures based on the guidelines set by the International Civil Aviation Organization in June. Proposed measures cover airports, aircraft, crew and cargo, minimizing the likelihood of passengers being close to each other during boarding, routine sanitation and disinfection, and contact tracing for passengers and employees.

Yuji Akasaka, JAL’s president, said that while there had been no outbreak inside an aircraft in any country, having ICAO-based hygiene measures “is the least we should do, as we need to do more to [mitigate the] psychological [burden].”

Having a “touchless” journey with a “clean environment” can be a big signal, Akasaka told the Nikkei Asian Review in a recent interview.

Some carriers are trying to provide reassurance which goes beyond the check-in or onboard experience. Emirates is providing free coronavirus insurance for all flight passengers, regardless of their flight class or destination, until October. Customers are covered for hotel quarantine of 100 euros ($118) per day, for up to 14 days and medical treatment of up to 150,000 euros if they catch the virus at destination and — in the worst case scenario — even a part of their funeral cost. Qantas Airways is upbeat on the potential of preboarding rapid coronavirus testing, according to CEO Alan Joyce, who talked about the idea at an online aviation event earlier this month. “There’s some great developments in testing that could resolve the issue of people needing to go into quarantine […] then you could see ‘bubbles’ opening up one by one,” said Joyce, referring to newly developed testing which shows the result in just 15 minutes. Australia has long considered forming a travel bubble with New Zealand, but the idea was suspended when a second wave outbreak hit the former’s Victoria state in July.

Although airlines are raring to see travel volumes return to normal, the industry will face another adjustment in keeping up social distancing and sanitation measures once there is a rise in travelers. ANA’s Kumita said despite these measures, the check-in time from the airport entrance to the boarding gate had yet to increase because of the small number of travelers these days.

“Right now, because there are fewer passengers and fewer flights, the social distancing is actually working and we are able to control the situation,” she said. “But if the flights come back and the passengers come back too, I am not sure if we are still going to be able to maintain that social distancing and all these protocols, or [whether we are] going to have to figure out a new way to accommodate the passengers and their travels.”

Some airports think advanced technology will help to increase operational efficiency once passengers are back.

Instead of talking to an agent and exchanging documents and boarding passes, passengers are able to walk through a gate for each area equipped with a camera once they check in with their passport. 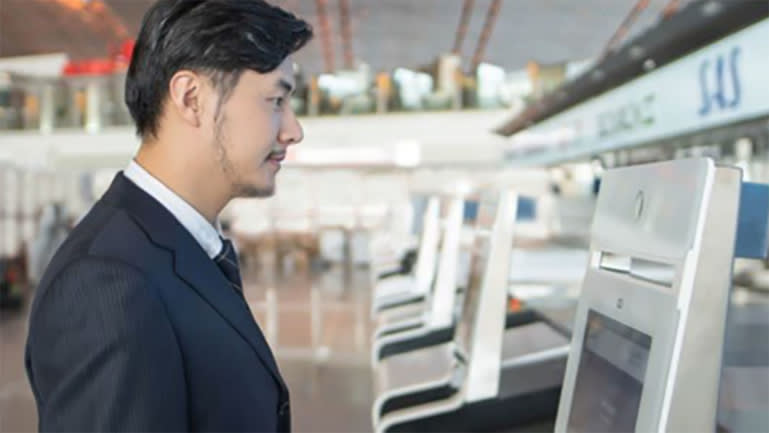 Reduced queuing time and more social distancing are ensured, said SITA, a multinational technology provider for the system. The technology processes over 400 passengers boarding an Airbus A380 at the airport in less than 20 minutes.

“Technology will be fundamental for a seamless journey,” said Sumesh Patel, SITA’s president for the Asia-Pacific. With the implementation at Beijing Capital, “we’re beginning to uncover the full potential of biometrics to boost passenger safety, convenience and confidence, in turn helping the air transport industry to recover and evolve,” Patel added.

While such efforts by airlines and airports to protect the health of travelers could to some extent lessen the fear for traveling for some, there are “no other measures better than finding out the root cause and eliminating the virus permanently,” according to Joanna Lu, head of consultancy for Asia, Ascend by Cirium, an aviation analytics company, insisting on the need for governments to collaborate.

“The fundamental enabler of resuming air traffic is the two countries’ recognition of each other’s health system and standards, as well as information sharing standards,” on the basis of a low number of cases, she added. “Without this […] it would be hard to achieve any sort of air travel bilateral agreement as there is no real solution yet for dealing with the virus.”