BEIJING — Three-quarters of companies recently blacklisted by the U.S. over Chinese military activities have dealings with the People’s Liberation Army, Nikkei research shows, a sign of the PLA’s growing reliance on the private sector under President Xi Jinping’s push for “military-civil fusion.”

The U.S. Commerce Department in August added 24 Chinese companies to the so-called entity list for what Washington says is their role in helping Beijing militarize artificial islands in the South China Sea.

Such military ties could prove a barrier to global expansion for Chinese private-sector companies at a time of rising tensions between Beijing and Washington.

Eighteen of these 24 companies have ties to the Chinese military, according to a review of public data and credit information. Of them, eight belong to one of three wholly state-owned conglomerates: China Electronics Technology Group, China Electronics and China State Shipbuilding Corp. (CSSC).

These groups are among China’s top 10 military contractors, according to the State Administration of Science, Technology and Industry for National Defense, or SASTIND. They are believed to have provided electronic equipment, software and ship-related expertise to China to build outposts in the South China Sea. 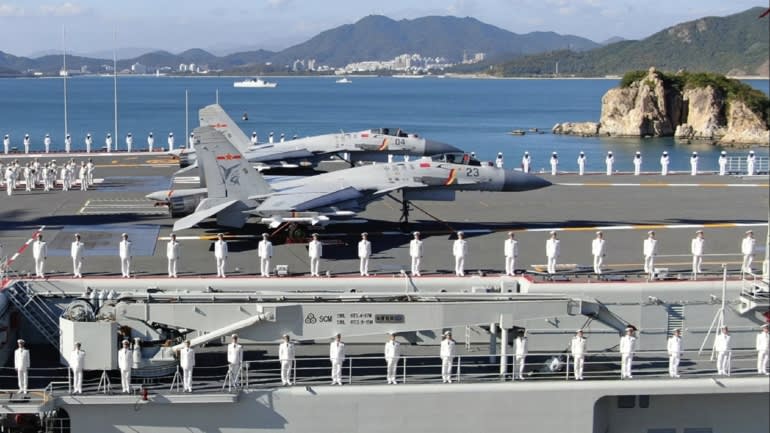 Sailors and fighter jets stand on the deck of the Shandong aircraft carrier during a Dec. 19 commissioning ceremony held in the South China Sea province of Hainan, in this photo provided by Xinhua News Agency.   © AP

Many of the other newly sanctioned companies are also state-owned, including some controlled by provincial governments. Websites associated with these companies show examples of products supplied to China’s military.

Businesses are barred from exporting American goods to those on the Commerce Department’s entity list without prior permission from the department, which is almost always denied.

On Aug. 28, the U.S. Department of Defense also added 11 names to its list of “Communist Chinese military companies.” Its additions included China National Nuclear Corp. and a unit of China Aerospace Science and Technology, both of which are also among the top 10 military contractors. The latter company is involved in missile development.

Aviation Industry Corp. of China builds fighter jets, while Aero Engine Corp. of China makes their engines. Others on the list make guns and tanks, and handle infrastructure projects.

The military wields significant influence over its contractors. The PLA places officers in executive posts at military-affiliated companies to facilitate the joint development of missiles and other weapons, Chinese media report. The companies’ leaders also tend to come from military-civilian research institutions. They develop and supply products specified by the military in line with plans made by the Communist Party leadership.

About 600 companies belong to the defense industry association under SASTIND. The association helps its members coordinate so they can more efficiently develop weaponry.

China has been accelerating its military-civil fusion policy, enlisting civilian high-tech companies to help with technological development. Xi himself chairs the Central Commission for Military-Civil Fusion Development, and regional governments have also set up their own agencies dedicated to the initiative.

The aircraft carrier Shandong, commissioned in December 2019 as China’s first homegrown carrier, is a result of Xi’s push. A total of 532 companies contributed to its development, which was led by CSSC. Nearly 80% of the suppliers had no previous dealings with the Chinese military.

More than 400 companies also took part in developing the BeiDou Navigation Satellite System, the Chinese version of GPS completed in June. The military is working with civilian companies on self-driving technology as well, a source familiar with the matter said.