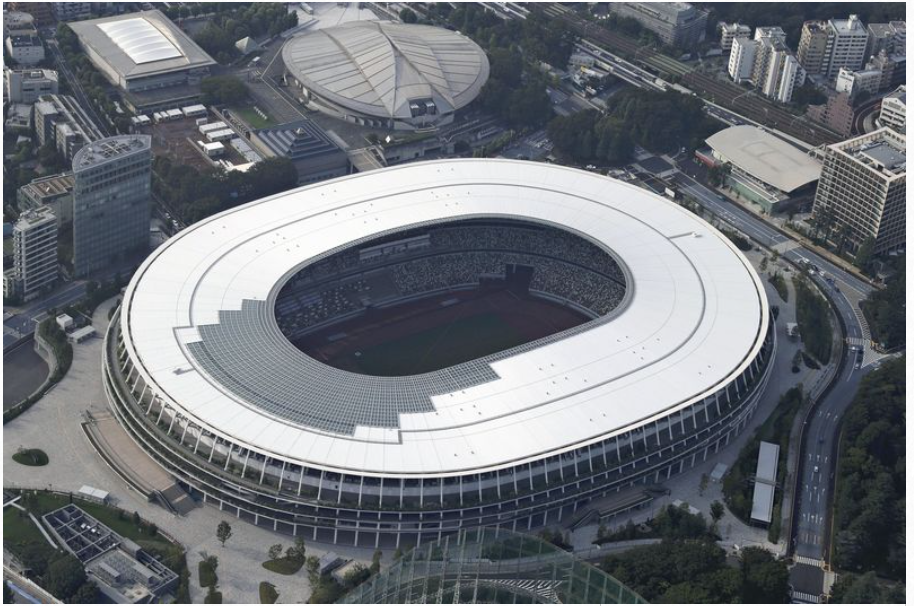 The Yomiuri Shimbun / The Japan National Stadium, where the opening and closing ceremonies of the postponed Tokyo Olympics and Paralympics are scheduled to be held. This photo is taken from a Yomiuri Shimbun helicopter on September 14.

The government is considering requiring athletes and staff from other countries to submit an activity plan and a written pledge to limit their movements in Japan, in return for exempting them from quarantine measures when they come here for the Olympics and Paralympics next year, according to a source related to the Games.

The government will also discuss the possibility of asking athletes to download the COCOA app into smartphones distributed to all athletes during the Games. The app alerts users when they may have been in contact with people infected with the novel coronavirus.

Under the government’s proposal, foreign athletes would have to be tested for the virus within 72 hours before leaving their countries and obtain a certificate showing them to be negative. They would be tested again at the airport in Japan — instead of isolating themselves for 14 days at a hotel or other location as currently required of visitors to this country — and follow the activity plan they submitted in advance.

The scope of their activities would be limited to such places as training camp locations, practice areas and host towns. They would have to travel, in principle, via a private vehicle provided by the Games’ organizing committee or their host towns, and avoid using public transportation as much as possible, except for travel to distant locations.

The pledge would be written at an airport upon entry, and is expected to include a statement written by athletes promising not to go to any place other than those listed in their plan. To ensure effectiveness, officials from each country or region’s National Olympic Committee would be in charge of managing the athletes’ behavior.

Some overseas tennis tournaments and basketball leagues have agreed to fine or suspend athletes if they go out without permission.

Putting the COCOA app — launched by the government to ascertain the state of coronavirus infections — into smartphones provided to all athletes is also a possibility. The app uses a wireless communication system to notify users if they were possibly within one meter of users infected with the virus for 15 minutes or longer.

COCOA is expected to make it possible to quickly identify and examine athletes feared to have been infected, so as to ward off clusters of infection.

The government was to discuss immigration controls and means of athletes’ transportation during a meeting with the Games’ organizing committee and the Tokyo metropolitan government on Wednesday.

■ No J.League amid Games

J.League professional soccer will suspend its season during the Tokyo Olympics and Paralympics planned for next year, The Yomiuri Shimbun learned Tuesday.

Due to the novel coronavirus, the rules for relegation to the lower leagues have been rescinded as a special case this season, and next season’s first division is expected to be contested by 20 teams, an increase of two, leading to a greater number of games.

Therefore, the schedule would be packed too tightly due to interruptions from the Olympics.

Before the coronavirus pandemic caused a realignment of the league’s game schedule this season, J.League had planned to suspend games from July to August for the sake of the Olympics. Next year, a stadium that five J.League teams are expected to use as their main venue will be a venue for the Olympic soccer competition.

Professional baseball confirmed at an owners’ meeting in July that it will suspend its official games next year during the Tokyo Olympics and Paralympics.