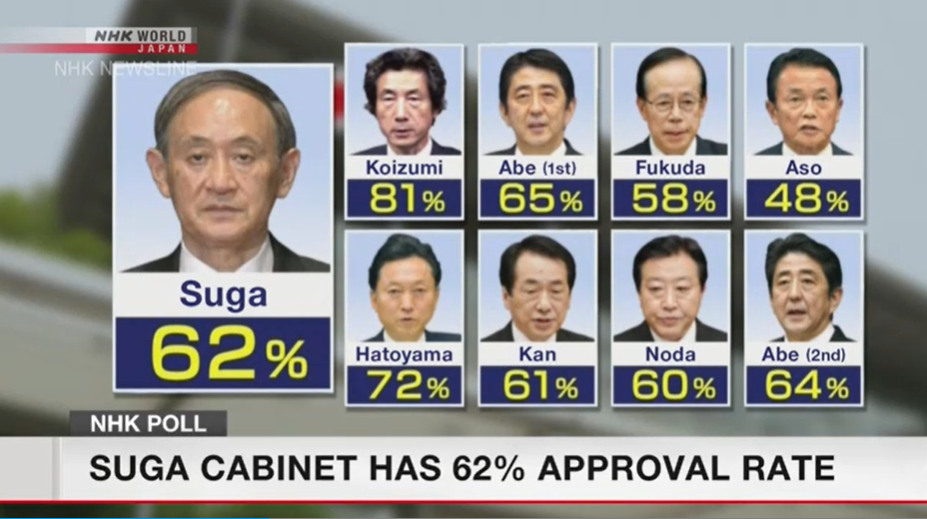 In the latest NHK opinion poll, 62% of respondents said that they support the Suga Cabinet, which was launched last week on Sept. 16. This initial approval rate ranks below that of the cabinet led by Koizumi Junichiro (81%) and by Hatoyama Yukio (72%) and is about the same as the initial support rating for the first and second Abe Cabinets, the Kan Cabinet, and the Noda Cabinet. No direct comparison can be made, however, because polling methodologies differ.

NHK conducted a nationwide survey over the two-day period of Sept. 21–22, 2020, on a computer-aided random digit dialing (RDD) basis and targeted men and women aged 18 or over with calls placed to landline and mobile phone numbers. Valid responses were received from 1,270 of the 2,214 people polled. The valid response rate was 57%.

In the poll, 62% of the respondents said they support the Suga Cabinet, while 13% said they do not.

Views on this matter differed by political party supported and age group. A total of 70% of ruling party supporters said either “he should carry on the policies of his predecessor” or “it would be better if he did,” while only slightly less than 30% of those supporting an opposition party gave these responses. Meanwhile, independents were split on the issue.

By age group, those age 70 or over were split on the issue, while those in their 60s or younger who said Suga should continue Abe’s policies outnumbered those giving negative responses.

Expectations of the Suga Cabinet

Asked what they expect most from the Suga Cabinet, 25% of respondents said “measures to deal with the coronavirus,” 20% said “economic measures,” 17% said “social security system reform,” 14% said “dispelling public mistrust in politics,” 9% said “deregulation” and 7% said “diplomacy and national security.”

By age group, 37% of those age 18 to 39 said that they want most for the Suga Cabinet to take “measures to restore the economy.” Some 25% of those in their 50s cited “coronavirus countermeasures” and another 25% said “economic measures.” Compared with other age groups, a higher percentage of those age 60 or over said they are looking for Suga to dispel public mistrust in politics.

Evaluation of appointments to Cabinet and LDP board

Timing of next general election

Asked when the Lower House should be dissolved and a general election held and given three options to choose from, 15% said “before the end of this year,” 14% said “in the first half of 2021” and 58% said “around October next year, when the current Lower House members’ terms end.” This last figure is up 9 percentage points from the August poll.

Views on the Abe Cabinet

Most highly viewed achievement of the Abe Cabinet

Asked which of the Abe Cabinet achievements they view most highly and given six options to choose from, 28% said “foreign affairs and security,” 15% said “economic policies,” 15% said “workstyle reform,” 10% said “childrearing support and measures to address the decline in the birthrate” while 7% said “consumption tax hike” and 6% said they “social security.”

The poll asked respondents how hopeful they are about the new Constitutional Democratic Party of Japan (CDPJ), which was newly formed through a merger of the former CDPJ and other opposition elements. 7% said that they “are very optimistic,” and 25% said “somewhat optimistic” while 36% said “not very optimistic” and 24% said “not optimistic at all.”