Japan’s new leadership in a time of virtual diplomacy 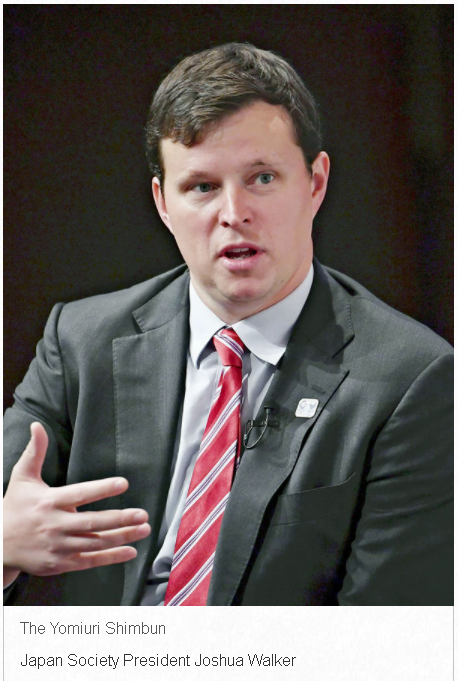 By Joshua Walker / Special to The Yomiuri Shimbun

The U.N. General Assembly will be virtual, for the first time ever, in 2020. Yet diplomacy was never meant to be virtual — from the earliest days of international exchange until now, what matters is relationships and being “in the room where it happens.” What does this all mean, then, for Japan’s new Prime Minister Yoshihide Suga?

This year’s General Assembly would normally have been a venue for Suga to introduce himself on a global stage and showcase his personal approach. For Suga, a virtual General Assembly is a missed opportunity to lay out an agenda, in person, and to make valuable new diplomatic connections. Although intricately involved in former Prime Minister Shinzo Abe’s administration, Suga is not as globally well-known as Abe. The son of a farmer, Suga worked his way up from serving on the Yokohama City Council to the position of chief cabinet secretary, to forming Japan’s 99th Cabinet as prime minister. He does not speak English, and he does not have Abe’s international background or pedigree.

Abe excelled at connecting his U.N. speeches to Japan’s broader initiatives, and was a sought-after partner around the globe in areas such as data privacy in Europe, development in Africa and investment across Eurasia. Suga’s U.N. experience will be different, in many ways. And while he is missing out on the in-person connections this year, that the U.N. General Assembly is being held virtually actually plays to the prime minister’s strengths — the technical and bureaucratic sides. Along with Abe’s foreign, finance, and trade ministers, who remain in their posts under Suga’s leadership, Japan has phenomenal bureaucrats and technocrats to bolster Suga’s agenda. Certainly, as the third-largest economy in the world, and one of the world’s most generous development contributors, Japan has a significant role to play.

Suga will speak after most of the other world leaders at the General Assembly, as the newest among them. Although he will be introducing himself as a world leader for the first time, it is important to realize that Suga has been a part of global diplomacy for the past eight years with Abe. Every phone call, every interaction (except maybe golf), that U.S. President Donald Trump, Russian President Vladimir Putin and Chinese President Xi Jinping had with Abe also included Suga — on the phone or in person — in the background.

Suga might not have the same pedigree as Abe, but underestimate him at your own risk. The world is about to get to know a Japanese prime minister who is very focused on helping his country recover. As Japan gets ready to host the Olympics next year, Suga has a strong and vested interest in bringing countries around the world together to find the best and most effective solutions to challenges that can’t be tackled by any one country alone, such as aging populations, climate change and public health. That so many political developments in Japan, including this summer’s Tokyo gubernatorial election, have happened in the COVID environment, offers important points of learning for the rest of the democratic world.

Suga’s previous domestic agenda focused on regional revitalization along with digital initiatives. His stated intention to create a “digital agency” is an interesting development because, until now, the countries leading in this space have largely been smaller nations — the Baltic states and Israel, among others. Japan is putting an agenda out there that, in some ways, could provide an alternative to the American- and Chinese-led competition over the technologies – from AI to supercomputers – that will shape our future lives, offering a kind of ‘third way.’

Japan has an essential role to play as a global rule-shaper. It may not be a rule-maker, driving the creation of new global operating procedures like the United States, but in an increasingly polarized world, Japan is well-placed to influence how those rules are shaped so as to create the right incentives and standards for the developed democratic world to come together. As the U.S. approaches its own highly contentious and polarized presidential election on Nov. 3, Suga is enjoying a honeymoon period of popularity at home. This is his opportunity to drive consensus on Japan’s Indo-Pacific strategy and infrastructure development abroad — areas where Tokyo can lead other like-minded allies in the face of Washington’s increasing focus on domestic issues.

I hope that this year’s General Assembly will be the last to take place entirely virtually, but it certainly will not be the last to have virtual components. Where Japan can play a larger leadership role is by connecting the dots on some of the legacy issues that Abe did not have a chance to tackle, such as climate change, digital initiatives and concepts of privacy, and how the Japanese economy can prosper at all levels — local, regional and global. With some of the leading private sector companies and technologies in the world, in combination with a prime minister who has a deep appreciation for regional initiatives and diversity within the Japanese economy, there is a lot of opportunity here for Japan.

Together with the rest of the world, I am looking forward to seeing Suga’s debut on the world stage, and we will see whether he seizes this opportunity to expand Japan’s global role.

Joshua Walker (@drjwalk) is president and CEO of Japan Society. Follow @japansociety. The views expressed in this article are the writer’s own.