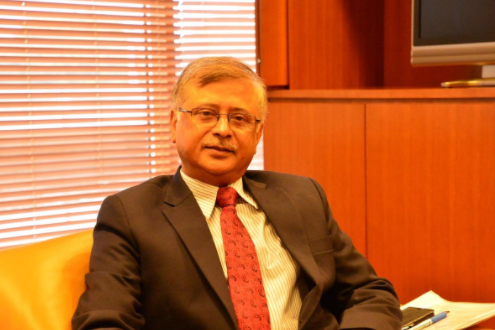 Indian Ambassador Sanjay Verma at the interview with the Sankei Shimbun at the Indian Embassy in Chiyoda Ward, Tokyo on Sept. 24, 2020 (photo by Kiyoshi Ouchi)

China’s hegemonic actions are creating tensions with its southern neighbor, India. In an interview with the Sankei Shimbun on Sept  24, Indian Ambassador to Japan Sanjay Verma stressed the importance of establishing a world order based on the “rule of law” through the “free and open Indo-Pacific” concept proposed by Japan.

In June, the Indian and Chinese militaries clashed in Ladakh in the Kashmir region of northern India through which the China-India Line of Actual Control (LAC) runs. India lost 20 lives. Ambassador Verma said: “There had been a kind of ‘gentleman’s agreement’ in place at the LAC (to prevent the intensification of the bilateral confrontation), but now (the Chinese side) has taken unilateral action.” “Distrust and suspicion” of China has arisen on the Indian side, and anti-Chinese sentiment has grown among the Indian people, he explained.

The Modi government subsequently banned the use of Chinese mobile applications, including TikTok, which is popular among young people. The reason given was that users’ personal data is being illegally taken via the apps. Ambassador Verma described the ban as “a measure to protect Indian sovereignty.” He expressed strong concern over China’s actions that deviate from international standards in the digital field as well.

He praised the “free and open Indo-Pacific” concept, saying that it declares the solidarity of the countries in the region in working toward establishing the “rule of law” and promoting democracy. Noting that “(the concept) is a vision and not a strategy targeting a specific country,” he emphasized [India’s] position of distinguishing itself from the U.S. Trump administration, which has incorporated into the concept the creation of an anti-China network.