With charts, stats and golf, Abe proved Japan’s worth to U.S. leader 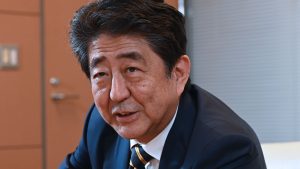 TOKYO — Less than 10 days after Donald Trump won the 2016 U.S. presidential election, Shinzo Abe visited him in New York City, becoming the first world leader to do so.

“You won by taking on the establishment,” the then-Japanese prime minister told Trump at the Nov. 17 meeting. “I was in the opposition too, and, like you, I took on the ruling party and won.”

Abe’s attempt to establish common ground early worked. “Then you and I have something in common,” Trump said.

This meeting, the start of the famed “bromance” between the two leaders, was among the scenes Abe recalled in an 80-minute interview with Nikkei on Thursday at his Diet office.

The president-elect had talked during his campaign about rethinking U.S. alliances and had hinted at pulling American troops out of Asia. It was a pivotal moment for Japan’s diplomacy.

Trump “was a different type of person from previous presidents,” Abe said, adding that “it was best to meet with him before his inauguration.”

Looking back on his seven-year, eight-month second stint as prime minister, Abe said that visiting Trump at that juncture to discuss the rise of China — and thus the importance of the Japan-U.S. alliance — was a key moment for his foreign policy.

The concern was that without the two sides agreeing on the importance of two key issues — the alliance and the trade and economic relationship — Japan’s diplomatic efforts could not get off the ground.

To make his point, Abe brought in graphs and visual aids to help explain the situation in East Asia. 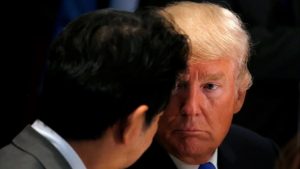 The meeting at Trump Tower ran for an hour and a half, twice as long as originally scheduled.

“When did China start to ramp up its military?” Trump asked, as well as how quickly it was proceeding. He looked shocked by the answer, according to Abe.

The escalation had begun nearly 30 years earlier, and spending swelled roughly 40-fold over that time, a pace unmatched by “any country in the world,” the prime minister told him.

Abe also gave specifics on the number of submarines in China’s fleet and suggested that their target was the U.S. Navy’s Seventh Fleet, which operates in the western Pacific Ocean. Arguing that the situation was a problem for not just Tokyo, but also Washington, he urged Trump to “maintain the U.S. presence” in the region.

Abe also acknowledged that “securing a promise to play golf was one of my goals” at that meeting. The two leaders engaged in golf diplomacy five times and held 14 official meetings in total.

Despite this friendly dynamic, Trump did not forget his campaign promises to correct what he saw as imbalances in foreign relationships. He repeatedly complained during meetings with Abe that the U.S.-Japan alliance was “unfair” and one-sided and pressed him to have Tokyo shoulder more of the cost of hosting American troops.

Each time, Abe pointed out that his government had pushed through legislation reinterpreting the constitution to let Japan exercise its right to collective self-defense in order to make the alliance one of mutual aid, at the cost of a 10%-plus drop in his cabinet’s approval rating. Trump praised the move as very brave.

The prime minister also repeatedly explained that Japan pays more than 70% of the nonsalary costs for troops stationed here, including housing and utilities. When he said this arrangement was cheaper for Washington than keeping those forces in the continental U.S., Trump said the explanation was very easy to understand. “You’re a genius!” he told Abe.

The Japanese leader advised Trump on where to hold his historic June 2018 summit with North Korean leader Kim Jong Un. Of the multiple proposed locations, Abe recommended Singapore, rather than an alternative such as Seoul, warning that “holding it on the Korean Peninsula could let North Korea set the pace.” Trump agreed.

But while Abe succeeded in building a solid alliance between Japan and the U.S., he left office with other issues unresolved.

These include negotiations with Russia over the disputed southern Kuril Islands, a longstanding issue that has kept the two sides from signing a post-World War II peace treaty. “There was an understanding that we were finally getting close to negotiations on concluding” a treaty, Abe said.

Depending on how the talks shook out, “I thought I might have to put it to the people” by dissolving the lower house for a snap election, he said.

When meeting with Russian President Vladimir Putin in December 2016, Abe had the sense that Putin intended to actively pursue a resolution to the dispute. The period up through the two leaders’ November 2018 meeting in Singapore was the “closest” the countries had come to finally settling the matter, he said.

But in the end, no treaty was signed. Abe cited outside factors, namely escalating tensions between Washington and Moscow following Russia’s annexation of Crimea.

On North Korea, Abe said there were signs of possible “budding momentum” toward his hoped-for summit with Kim. But the two leaders never met, and Abe could not bring closure to the issue of past North Korean abductions of Japanese nationals, one of his foreign policy priorities.

The matter required “top-level decisions, so it was rather difficult” to make progress without a summit, a regretful Abe said.

Abe left office without mending ties with South Korea that had deteriorated to their lowest postwar level amid battles over trade restrictions and the longstanding issue of compensation for South Koreans forced to work for Japanese companies during World War II.

The task of wrapping up the loose ends of the former prime minister’s diplomacy that “takes a panoramic perspective of the world map” has been left to his successor and former right-hand man, Yoshihide Suga.

The former leader, who announced his resignation in August over a flare-up of a chronic illness, appeared to be in good health, which he credited to a “very effective” new medication. He remains a member of the lower house.