Abe: I showed what amending the Constitution could look like 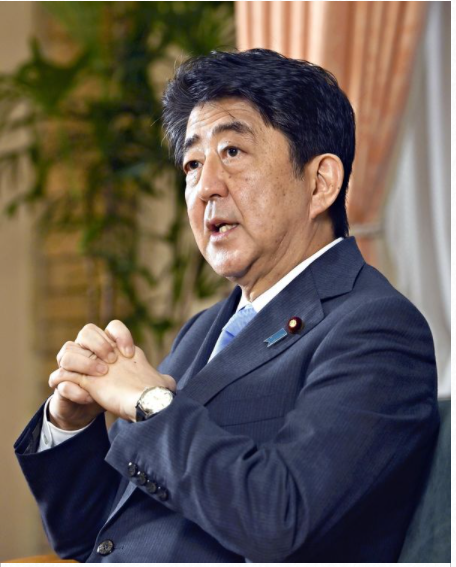 Then Prime Minister Shinzo Abe, during a recent interview with The Yomiuri Shimbun, looked back on his first and second administrations and discussed his thoughts on the current political situations, domestic politics and global diplomacy. This is the second installment of a three-part series.

The Yomiuri Shimbun: Tell us about the measures against the novel coronavirus.

Shinzo Abe: Since it is the fight against an unknown virus, there is no right answer. I asked myself every day if there might have been better ways to deal with it.

Every time, I tried to take measures that seemed to be the best at the moment while listening to the opinions of experts. I gave utmost consideration to balancing infection prevention measures and social and economic activities, which has been the most important issue since the state of emergency was lifted nationwide.

Among the Group of Seven nations, Japan has seen the smallest number of deaths [from COVID-19]. I am grateful to the people and health care workers for their efforts.

Q: Why didn’t the system led by the Prime Minister’s Office work?

A: It is true that there are issues such as the vertically structured administrative system and cooperation between the central and local governments. We need to prepare for the risk of both the coronavirus and influenza spreading in autumn and winter. While we have received various criticism, I hope that the government will review and carefully analyze problems to better deal with the virus.

Q: What do you think of when you look back at your efforts to make constitutional amendments?

In the previous ordinary Diet session, the House of Representatives’ Commission on the Constitution held a substantial discussion only once. This will inevitably prompt criticism, with some saying, “What are Diet members doing?”

A: I argued hard and hit back when necessary. That was my answering style. That way would help get citizens interested in politics and allow fundamental discussions. I thought I would be able to show what the issues are more clearly. Sometimes I was told that I was being immature. However, I believe that the mission of politicians is to engage in intensive discussions and debate policies.

Q: What do you think of the Tokyo Olympics and Paralympics in 2021?

A: I still remember my feelings when the International Olympic Committee said “Tokyo” and named it as the host city of the 2020 Games at the IOC session in Buenos Aires in 2013. At the time of the 1964 Tokyo Olympics, I was 10 years old and I was excited about the great performance of Japanese athletes. I hope that enthusiasm will be conveyed to children today.

We are facing the coronavirus crisis, which is a special situation. Amid such a situation, if we can carry out the Olympics and Paralympics as proof that mankind can defeat the virus, they will have a special meaning. To hold these events, various ideas and measures are necessary. I strongly expect them to take place through cooperation among various organizations like the Games organizing committee and the IOC.

Q: You were unable to resolve the issue of the abduction of Japanese nationals by North Korea.

A: I’ve known families of the abductees for many years. I’ve been thinking that it was my mission to make all-out efforts to enable them to embrace their children again. I tried to find various ways and took every possible measure. To my regret, however, [during my time as prime minister] there has yet to be a single abductee who has returned to Japan, which is really painful.

However, the Abe administration succeeded in making the issue known to the international community. U.S. President Donald Trump and Chinese President Xi Jinping have delivered my message to North Korean leader Kim Jong Un. I think Suga as prime minister will also make every effort to resolve this issue.

While in power, Prime Minister Shinzo Abe continued to express strong enthusiasm to amend the Constitution, which has been his long-cherished desire.

In December 2012, soon after Abe returned to power, he began efforts to amend Article 96 of the Constitution, which provides the procedures for constitutional amendment, ahead of other amendments. Toru Hashimoto, then co-leader of Nippon Ishin no Kai, joined the efforts and the discussion gained momentum.

However, they failed to gain broad understanding from the public.

In line with Constitution Day in May 2017, Abe said in an interview with The Yomiuri Shimbun, “I would like to make 2020 a year when a new Constitution comes into force.” With Abe’s intention in mind, the ruling Liberal Democratic Party reported at a party convention in March 2018 a draft proposal for constitutional revisions consisting of clauses on four items: stipulation of the legal grounds for the Self-Defense Forces; creation of an emergency provision; elimination of merged constituencies in the House of Councillors elections; and improvement of education.