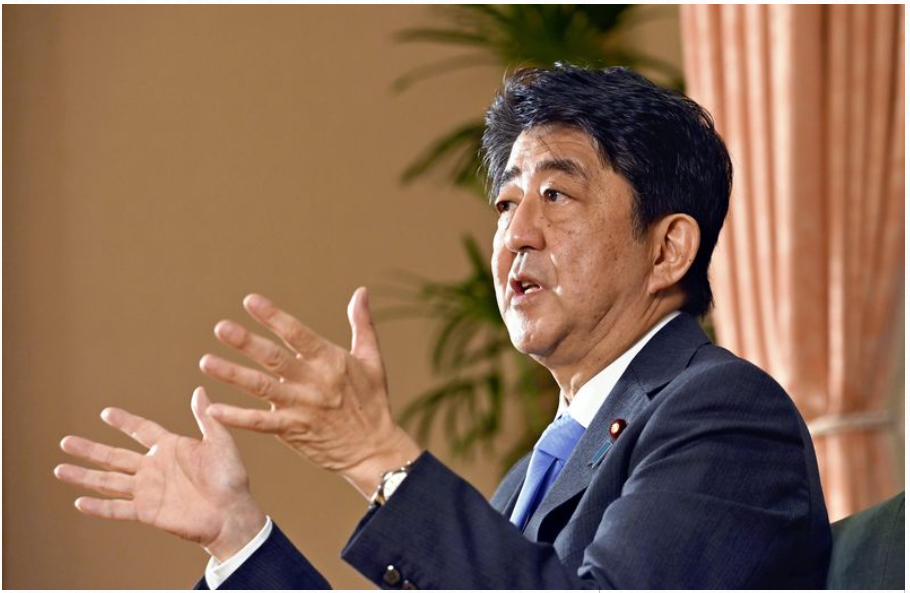 Then Prime Minister Shinzo Abe, during a recent interview with The Yomiuri Shimbun, looked back on his first and second administrations and discussed his thoughts on the current political situations, domestic politics and global diplomacy.

This is the final installment of a three-part series.

The Yomiuri Shimbun: What are your diplomatic achievements?

Shinzo Abe: We developed a diplomacy that takes a panoramic perspective of the globe and is value oriented. We now share with the United States and many other counties the idea of a “free and open Indo-Pacific.”

My biggest crisis was when the United States withdrew from the Trans-Pacific Partnership trade deal. During a walk on the beach in Australia with [then] Prime Minister Malcolm Turnbull in 2017, we came up with a strategy to conclude the TPP without the United States. I said, “I’ll talk to Vietnam if you talk to New Zealand.” It was Japan that put the finishing touches on the TPP.

Q: How did you build a relationship with U.S. President Donald Trump?

A: Unlike his image, President Trump really listens to people. He was very interested to hear what I thought about diplomacy, security and economics. The president is a frank person, so we had a lot of intense discussions.

Trust is not something that can be built in meetings alone. Passing peace and security legislation, such as to allow the limited use of the right to collective self-defense, strengthened the Japan-U.S alliance. It was important to make the alliance one in which we help each other.

Q: What about Japan’s relations with China?

A: When I visited Yasukuni Shrine in December 2013, people said the Japan-China relationship was at the worst it had been since the normalization of diplomatic relations. Yet, during my first administration, our countries agreed to form a “mutually beneficial relationship based on common strategic interests.”

To push Japan-China relations to a new level, I met with President Xi Jinping and other Chinese leaders multiple times. As a result, we were able to put the relationship on a normal track, such as through reciprocal visits by leaders. I was able to discuss the most sensitive issues, such as the East China Sea and Hong Kong, openly with President Xi.

In the past, “Japan-China friendship” had become the goal. But friendship is only a means. The goal is the interests of the nation. I do not think national interests should be damaged for the sake of friendship.

People talk about conflict between the United States and China, but we have to be clear that the basis for our diplomacy and security is the Japan-U.S. alliance.

Q: In 2015, you released a statement on the 70th anniversary of the end of World War II.

A: History is not something a country makes on its own. Japan’s history exists within the world. In politics, we must learn the lessons of history. At the same time, history should not be distorted for political or diplomatic intentions. Based on these thoughts, I released a statement commemorating the 70th anniversary to engrave the war’s lessons on our hearts and explore what kind of Japan we should create for the future. The next year, the U.S. president visited Hiroshima and I went to Pearl Harbor.

In 2015, we agreed on a final and irreversible solution to a major issue [over comfort women] with South Korea, which received high praise from the international community.

There are still various arguments over historical issues, but I think it is no longer possible to try to vilify Japan.

■ On the northern territories

Q: You were not able to achieve the return of the northern territories.

A: Four months after I again became prime minister I visited Russia to meet with President Vladimir Putin. At the time, we were both resolved to settle issues that had been left unresolved for a long time since the war and to deepen Japan-Russia ties.

Former residents of the islands are always on my mind. Even after I announced my resignation, I received letters from former island residents. While thanking me for my efforts, they also expressed great disappointment.

A: At the meetings, we threw a lot at them and we tried to interpret the responses [of the Russian side]. The process involved doing that over and over. I think in the medium and long term, Putin wants to solve the issues and strengthen relations with Japan.

Negotiations that affect national interests are not easy. That said, territorial issues should not be neglected. I look forward to proactive negotiations under Prime Minister Yoshihide Suga and the conclusion of a Japan-Russia peace treaty. I want to provide support as a member of the Diet.

Q: What are your future political plans?

A: Basically, I’ll be a ball boy. If the prime minister asks, I will be happy to help out [such as being a diplomatic envoy] in various areas.

(End of the three-part series)

Shinzo Abe set out to achieve a final settlement of Japan’s postwar diplomacy, pouring his heart and soul into resolving the dispute over the northern territories.

He met with Russian President Vladimir Putin 27 times. He once declared, “Putin and I will definitely close the books.”

In negotiating territorial issues, he advocated a new approach that included leading with joint economic activities and other such programs.

In 2018, Abe and Putin agreed to negotiate on the basis of a 1956 Japan-Soviet joint declaration that stipulated the islands of Habomai and Shikotan would be returned, which essentially changed the course of the negotiations to “returning two islands.” However, as the return of territory came closer to reality, Russian public opinion hardened and negotiations came to a standstill.

During his tenure, Abe actively engaged in diplomacy with other leaders through visits to 80 countries and regions, which he called “diplomacy that takes a panoramic perspective of the globe.”

(The interview was conducted by Keita Ikeda and Hiroshi Tajima)