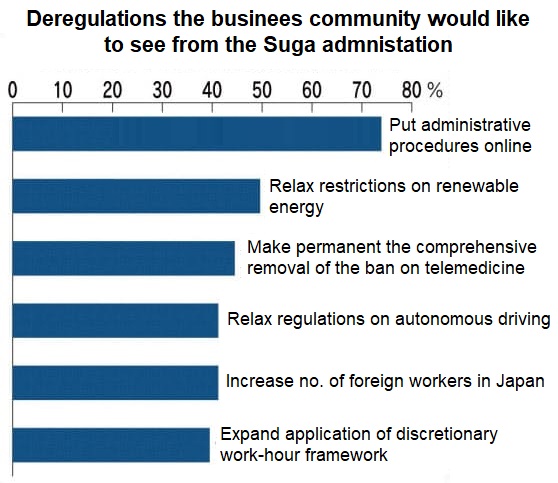 The business community has growing expectations for deregulation from the Suga Cabinet. In the Nikkei poll of 100 major Japanese companies, almost 90% of respondents said that the new cabinet should “introduce more deregulation.” Demand is high in the fields of administrative procedures and renewable energy. More than half of corporate executives polled said that it will take two years or more for their respective markets to return to pre-pandemic levels. A radical growth strategy is called for.

The Nikkei questionnaire survey targets presidents (including chairpersons) of major Japanese companies about once every three months. In addition to the periodic poll conducted on Sept. 8–24, a spot poll was also conducted on Sept. 17–24 in light of the launch of the new administration. A total of 145 companies responded to the regular poll, and 119 companies participated in the spot poll.

Asked for their views on deregulation, 89.3% of respondents (calculated after excluding “no answer”) said deregulation “should be expanded.” Former Prime Minister Shinzo Abe’s economic policies known as “Abenomics” were highly regarded overall by business executives, but a total of 29.6% said that they “generally do not think highly” or “do not think highly” of [Abe’s handling of] deregulation. Dissatisfaction with the fact that Abe did not adequately promote the reform of bedrock regulations has led to this expectation of the new administration. 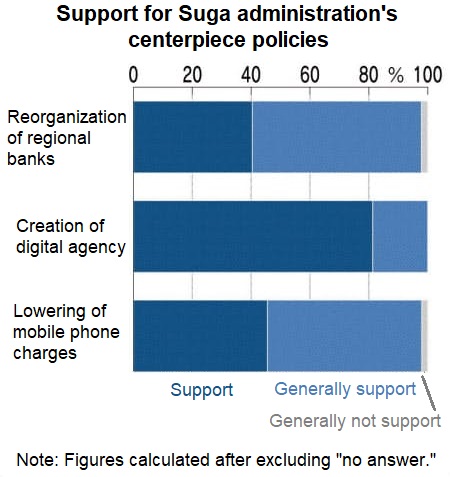 Asked which areas they would like to see deregulated (multiple responses permitted; respondents were given a list of options to choose from), 73.9% of respondents said “put administrative procedures online,” making it the most frequently given response. In its March proposals, the Japan Business Federation [Keidanren] said that the need to submit documentation (including contracts with administrative organizations and the issuance of certificates) and affix stamps hinders efficiency. “It is urgent that these procedures be put online to enable speedy policy implementation,” said Kirin Holdings President and CEO Yoshinori Isozaki.

The second most frequently given response was “relaxation of regulations on renewable energy” at 49.6%. In July, the Japan Association of Corporate Executives [Keizai Doyukai] issued a proposal to increase the percentage of renewable energy [in Japan’s energy mix] by deregulating wind power generation permits and licenses. Some 44.5% of respondents said “perpetuation of the complete removal of the ban on telemedicine,” which Prime Minister Yoshihide Suga is keen to do. Meanwhile, 41.2% of pollees said “deregulation of autonomous driving,” which the United States and China are moving forward with.

A total of over 90% of respondents said they either “support” or “generally support” the “creation of a digital agency,” and the same percentage said that regarding “lowering mobile phone charges.”

“In light of the rapid changes in the industrial structure, Japan should promote the renewal of companies with appropriate speed,” said Daiwa Securities Group President Seiji Nakata. “We should be cautious about measures that place extreme pressure on the management of small and medium-sized enterprises,” cautions Shimizu Construction President Kazuyuki Inoue.

According to the Nikkei poll of 100 major Japanese companies, 38% of corporations think that the global economy is expanding now. This marks a dramatic increase from the 5.5% of executives who gave that answer in the previous poll conducted on June 30–July 15. While more executives believe the world has emerged from the worst of the pandemic, many executives are concerned about uncertain elements, including the development of therapeutics for COVID-19 and the friction between the United States and China.

While 2.8% of respondents said that the global economy is “expanding,” 35.2% said it is “expanding moderately.” Both figures are up from the previous poll, by 2.1 percentage points and 30.4 points, respectively. “The economic slowdown during the April-June quarter was exceptionally great. In reaction, the economy in Japan and globally is rallying,” commented Sumitomo Chemical President Keiichi Iwata.

Executives’ outlook for the global economy six months from now also improved. A total of 60% said the economy will either be “expanding” or “moderate expanding,” up by 19.3 points from the previous poll. Asked for the reason for their response (up to four responses permitted), 83.9% of respondents said “easing of the coronavirus-related restrictions on economic activities,” making it the most frequently given response.

Some, however, voiced concerns, such as a major food company who said, “Economic activities will be greatly restricted by what happens with the world order, including the friction between the U.S. and China. This as well as the trends in the development of coronavirus therapeutics are major factors affecting the global economy.”

Asked how long it would take for their respective markets will return to pre-pandemic levels, a total of 54.7% of respondents said “at least two years,” essentially unchanged from the 55.8% found in the previous poll. Corporate executives’ medium- to long-term outlooks remain cautious.