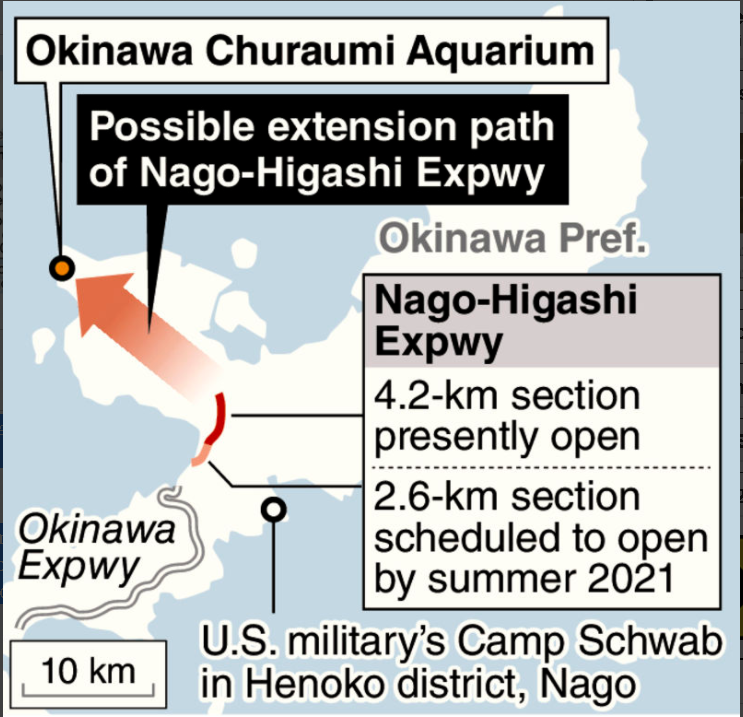 In a bid to improve access to major tourist destinations in the northern part of Okinawa Island, the government is considering an expressway extension to the area, The Yomiuri Shimbun has learned.

By boosting the area’s tourism, the government also hopes to gain the understanding of the public regarding the relocation of the U.S. Marine Corps’ Futenma Air Station in Ginowan, Okinawa Prefecture, to the city of Nago, located in the island’s northern half.

Under the envisaged plan, the government will consider extending the Nago-Higashi Expressway, slated to become fully operational in Nago next summer, to the area around the Okinawa Churaumi Aquarium in the town of Motobu.

Among the area’s tourist spots that will become more accessible through the road’s extension are the UNESCO-recognized Nakijin Castle Ruins in Nakijin and a theme park that is scheduled to open by 2025.

The extended road may not fully operate as an expressway. Discussions on the specific nature of the route are still in progress.

The Okinawa Expressway, which currently runs from the southern city of Naha to Nago, is scheduled to be connected with the Nago-Higashi Expressway.

Presently, it is about a two-hour drive to the major tourist attractions in the north from Naha Airport. The road’s extension is expected to drastically reduce that travel time.

Prime Minister Yoshihide Suga, as chief cabinet secretary under the previous administration, made an effort to promote the area along with the Futenma relocation plan to Nago’s Henoko district.

The project to construct a theme park in the area straddling Nakijin and northern Nago is garnering attention as a new tourist attraction. The government hopes to lend its support to the project, which is expected to boost tourism revenue and employment, through the road extension.