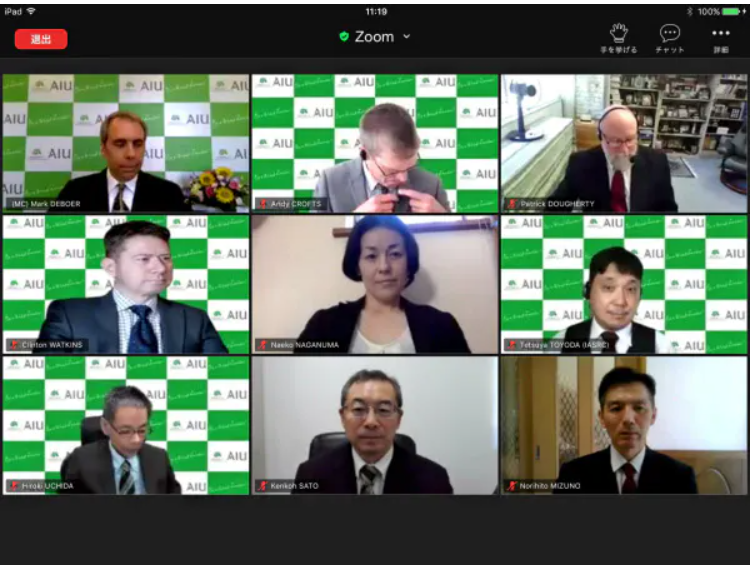 Akita International University professors offer words of welcome and congratulations to freshmen during an online entrance ceremony on Sept. 6.

“I want to quit school,” a 20-year-old sophomore at Waseda University’s School of International Liberal Studies says with tear in her eyes. The faculty requires its students to study aboard for one year. She had high expectations that her planned study in Europe this autumn would serve as a step toward her goal of becoming an internationally competent person. But her plan was canceled due to the novel coronavirus pandemic.

The university and her family told her “the study abroad program may be restarted.” But she thought that would be unlikely because the university later decided to remove overseas study  from the graduation requirements. She feels that it makes no sense to be in this faculty and is seriously considering leaving Waseda and entering another university either in Japan or overseas.

Japan expanded its travel restrictions from January due to the coronavirus pandemic. As of Sept. 7, Japan advises its nationals not to travel to 159 countries and regions, which account for roughly 70% of the countries in the world. It directly affected universities and faculties for international relations studies touting the development of globally-minded human resources. The number of such institutes has skyrocketed in recent years.

According to Kawaijuku Education Institution, a major university preparatory school operator, there are more than 25 universities and 40 faculties requiring their students to study overseas or take part in an overseas study tour. But many of them were forced to either cancel or downsize these programs.

Tokyo City University (TCU) is no exception. The school offers the “TAP” study abroad program and sends its students to study at an Australian university for four months after taking a 100-day crash course in English during the freshman year. The program has enjoyed popularity among TCU students and high school students preparing to take the TCU entrance exam.

But in March, 151 TCU students, who were studying in Australia, began to return to Japan in the middle of the semester. TCU also suspended travel to Australia by its new students. The travel had originally been scheduled for August, but TCU announced that the program would be suspended temporarily and resumed in August 2021. TCU President Chitoshi Miki underscores: “Studying in Australia makes a great difference. We’ll continue the TAP program even though we have to reduce the length of students’ stay there.” But it is undeniable that the resumption of the program depends on the coronavirus situation.

The coronavirus pandemic also put a crimp in programs for international students to study in Japan. Akita International University (AIU), where international students make up about 25% of the entire student body, closed its campus in Akita City this fiscal year. AIU is the only university in Japan which has decided to continue offering classes online only in the second semester as it also has many students who hail from outside the prefecture.

AIU President Norihiko Suzuki considers that the pandemic “revealed the negative aspect” of its globalization program, which is based on students’ traveling overseas. AIU now offers online joint classes with overseas partner universities and free online courses “MOOCs” for students to acquire an international mindset. However, Suzuki says, “Not only acquiring knowledge but also meeting with people and gaining experience overseas are necessary to achieve the goal of forming character.” AIU is yet to find an answer that is convincing to both students and the university.

Kyosuke Nagata, chairperson of the Central Council for Education’s subdivision on universities and president of the University of Tsukuba, also understands the significance of studying abroad. “Being exposed to the climate and culture of a different country and discussing matters with other students over a meal of local food–that kind of environment leads to  a new way of thinking and an understanding of other people’s views,” he comments.

Kansai University President Keiji Shibai, who made it mandatory for students of the Faculty of Foreign Language Studies to study overseas, says, “No one thinks that globalization will go backward.” The university is hastily considering to which countries or regions it will send its students and when to resume its study-abroad program.

The government will also lift its ban on accepting international students as early as October. Universities which can quickly and successfully return to the globalization track will lead Japan’s education going forward.