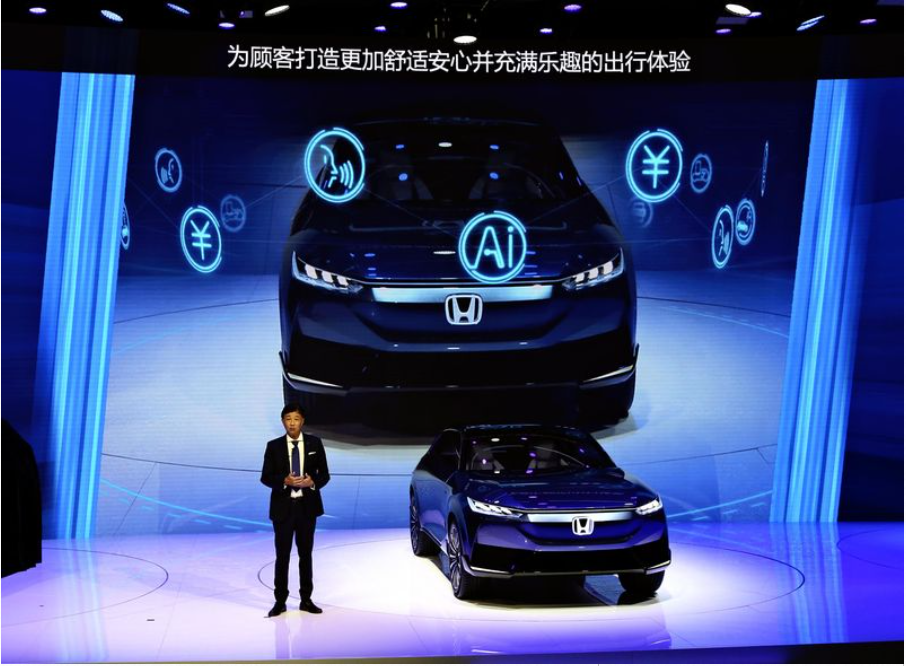 Koki Kataoka / The Yomiuri Shimbun / A prototype of the Honda SUV e:concept car is unveiled at the Beijing International Automotive Exhibition 2020 in China on Saturday.

BEIJING — China’s economy has quickly gotten on a recovery track that has helped revive new-car sales, leading automakers from around the world to increasingly depend on the Chinese market amid the unceasing global novel coronavirus pandemic.

At the 2020 Beijing International Automotive Exhibition that started Saturday, automakers are displaying an array of SUVs and electric vehicles and using their presentations to emphasize their intention to focus on the Chinese market.

“Let me show you this car that indicates the direction of future Honda electric vehicles,” said Katsushi Inoue, a managing officer of Honda Motor Co. and the chief officer of China operations.

He proceeded to unveil a prototype of the Honda SUV e:concept for the first time in the world at the auto show.

Honda’s research center in Guangzhou, China, led the development of the EV, positioning the model as a strategic vehicle that it aims to market globally from China.

Nissan announced plans to invest in seven new models in China by 2022.

Behind these moves is the strong recovery of new-car sales in China.

According to the China Association of Automobile Manufacturers, February saw a 79% year-on-year decline in new-car sales due to the novel coronavirus outbreak. But then the government policy to prop up sales has proved to be effective. Since May, sales have enjoyed double-digit growth over the same month the previous year, and the trend is in sharp contrast to Japan, the United States and Europe, where recovery has remained slow.

In February and March, when the spread of the coronavirus was serious in China, the supply of auto parts from China slowed and affected automobile production in many countries.

In light of the recent strong sales, however, many automakers don’t view China as a risk and have stepped up their inclination to the Chinese market.