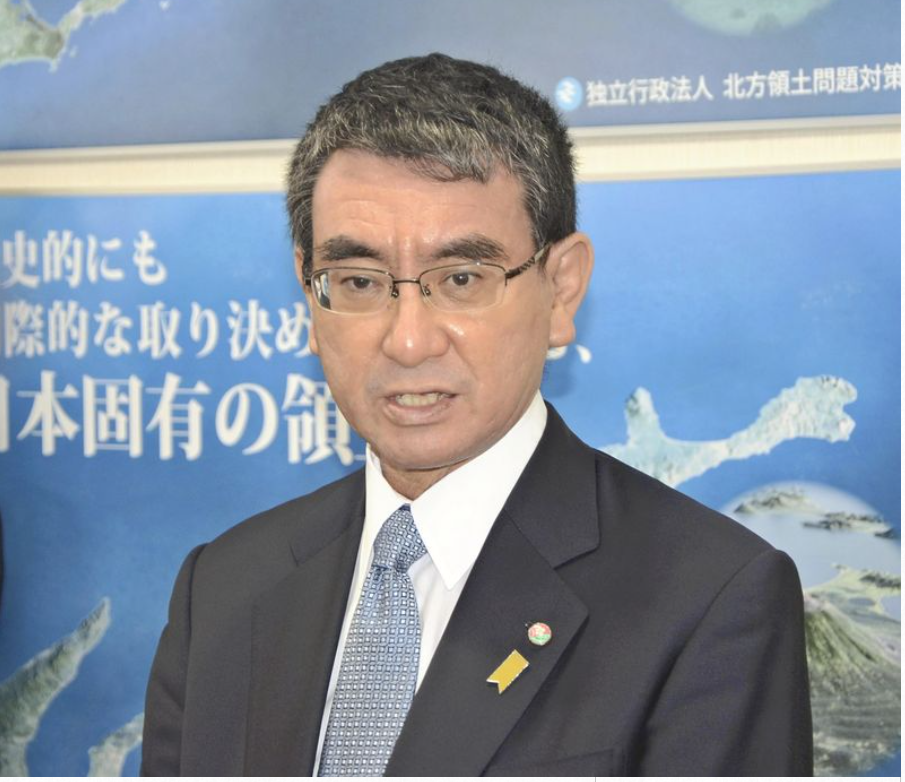 The Yomiuri Shimbun / Taro Kono talks about his enthusiasm for regulatory reform in Nemuro, Hokkaido, on Sunday.

Kono has hammered out such goals one after another. But bureaucrats are expected to resist all these efforts, so his ability to push past them will be tested.

Kono said Sunday, “I want to firmly implement regulatory reforms that the public believes can make their daily lives more convenient.” He expressed his determination during talks with reporters in Nemuro, Hokkaido, which he was visiting for an inspection tour.

Previously the defense minister, Kono was appointed to his current posts in a lateral move when the Cabinet of Prime Minister Yoshihide Suga was launched on Sept. 16. He has served as minister for regulatory reform before, and as chairperson of the Liberal Democratic Party’s Headquarters for Promoting Administrative Reform. Thus, Kono has been highly persistent in eliminating wasteful factors in administration.

On Sept. 17, the day after his most recent appointment as minister in charge of administrative reform, Kono opened “gyosei kaikaku meyasubako,” an online system to collect opinions from the public on his website, in line with an instruction from the prime minister.

The aim of the online system is to search for pragmatic examples of administrative authorities’ sectionalism and wasteful elements. The system was forced to temporarily close after just one day, as more than 4,000 messages flooded in. On Sept. 25, Kono opened another online corner for the same purpose on the Cabinet Office’s website.

The day before, Sept. 24, Kono asked all governmental ministries and agencies to stop using hanko seals, in principle, in their administrative procedures.

In the Kasumigaseki national bureaucratic circles, there are about 11,000 kinds of documents that need to have seals affixed. In cases where they could not stop using the seals, Kono called for the ministries and agencies to submit explanations why by the end of this month.

Bureaucrats complained, with one saying, “We have to reexamine a huge number of documents in just a week.”

Kono’s aggressive moves are unstoppable. “After seals, I want to abolish documents and faxes next,” he said at a press conference on Sept. 25. Kono indicated his intention to quickly put administrative procedures online after the abolition in principle of seals.

Many past Cabinets have also tried to combat the sectionalism of the ministries and agencies. But their efforts were weakened by resistance from bureaucrats.

Despite past difficulties, Kono is aggressive primarily because he is backed by the prime minister.

On a Fuji Television program aired Sept. 13, Suga said, “If [bureaucrats] oppose something even though [politicians] have made a decision to do it, they must be moved to other positions.”

Kono is also aided by the fact that the Suga Cabinet regards the elimination of bureaucratic sectionalism and the digitization of administrative procedures as high-profile policy goals.

About role-sharing for this purpose, Kono said, “I remove land mines and Digital Transformation Minister [Takuya] Hirai follows me in a tank.”