FUKUOKA, Japan — This southwestern Japan city, which has raised its profile as an Asian tourist destination in recent years, has kicked off an effort to compete with Tokyo as an alternative financial hub to Hong Kong.

The heads of major local corporations joined hands with academic and political leaders on Tuesday to form Team Fukuoka, an organization with a goal of attracting financial institutions and other multinationals to Fukuoka Prefecture on the southwestern island of Kyushu.

Japan’s push to attract financial business seeks to turn the political uncertainty hanging over Hong Kong into an opportunity. A day after China imposed a new national security law on Hong Kong, Japanese lawmakers started official discussions on ways to welcome financial talent that may be contemplating leaving city.

As the government weighs candidates for an international finance center, the group will press Tokyo for such measures as tax and immigration reforms to make Fukuoka an easier place for foreigners to live and do business.

“The urban model we aspire to is something different from New York or London,” said Soichiro Takashima, mayor of Fukuoka, the prefectural capital. “We need to make ourselves stand out in terms of what financial functions we create a cluster of.”

Fukuoka Prefecture’s proximity to the Asian mainland has led some to call it Japan’s “gateway to Asia.” The city is closer to Seoul than it is to Tokyo. Shanghai and Taipei are also nearby destinations.

Team Fukuoka aims to build momentum for the city’s financial hub bid by bringing together the private and public sectors as well as academia. 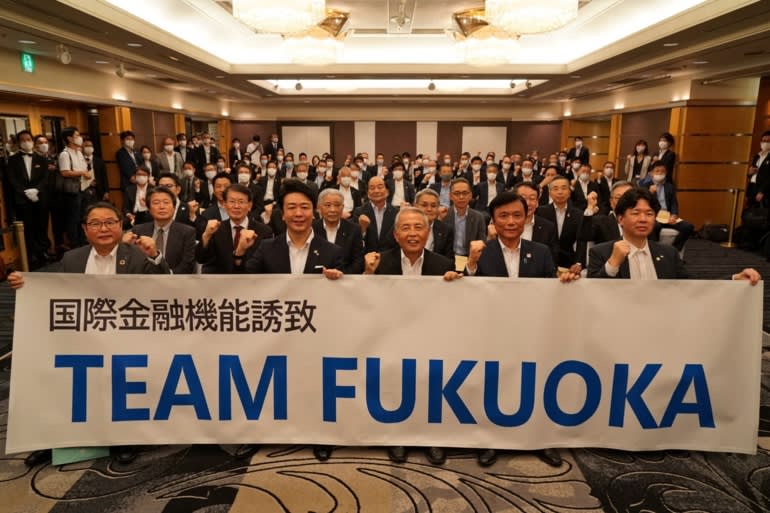 Team Fukuoka hopes to attract financial institutions and other multinationals to the prefecture. (Photo by Yoshikazu Imahori)

The organization’s leadership is made up of top figures from seven leading Fukuoka-based companies, a group that includes Kyushu Electric Power, JR Kyushu and Fukuoka Bank, as well as from Kyushu University.

The effort was spearheaded by Takashima, Kyushu Electric President Kazuhiro Ikebe and Yutaka Aso, the chairman of the Kyushu Economic Federation and brother of Japanese Finance Minister Taro Aso.

Fukuoka offers a way of coping with both uncertainty about Hong Kong and the coronavirus pandemic, according to Kyushu Electric’s Ikebe.

“The solution to the simultaneous equation posed by these two major problems is to nurture Fukuoka into an international financial center for Asia,” he said.

The competition includes Tokyo and the Kansai region centering on Osaka, not to mention such other Asian capitals as Singapore and Seoul.

Fukuoka ranked 22nd among cities in the 2019 Quality of Life Survey published by Monocle, a U.K. magazine. That put it ahead of Singapore at 25 but behind Hong Kong at 16, Sydney at 13 and Tokyo at 2.