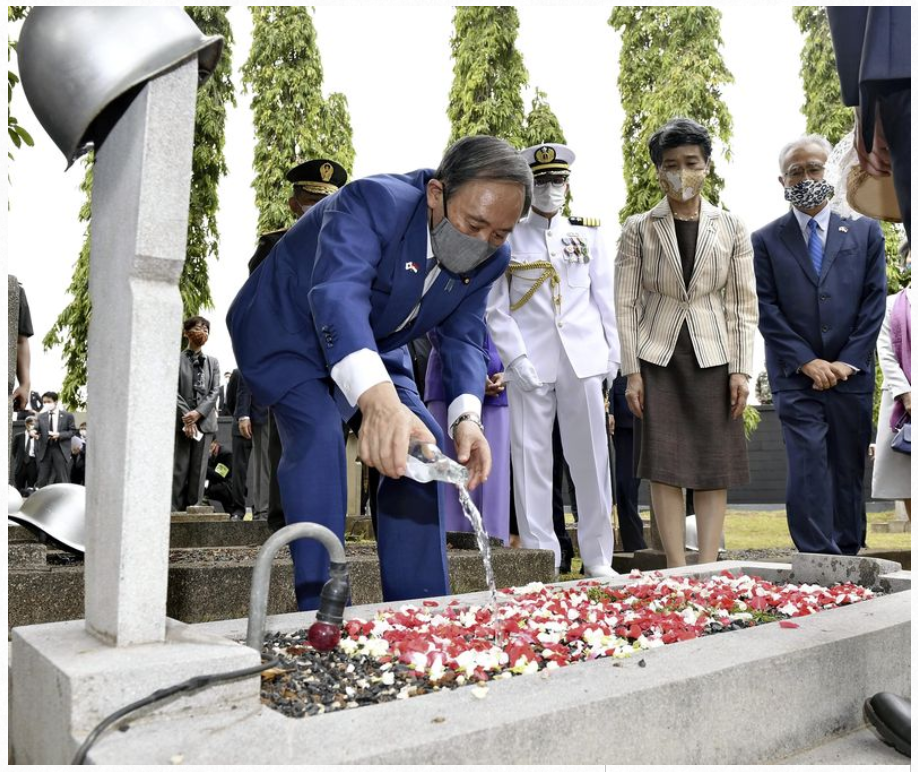 Pool photo / Prime Minister Yoshihide Suga, left, pours water over the grave of a Japanese national at the Kalibata Heroes Cemetery in the suburbs of Jakarta on Wednesday.

Prime Minister Yoshihide Suga returned from his first trip since taking office, during which he made known his basic diplomatic policy of expanding cooperation with the Association of Southeast Asian Nations in the economic and security spheres while keeping China in check.

At the same time, however, he showed some consideration for China by stressing that Japan had no intention of encircling the country.

Suga arrived at Haneda Airport on a government plane Wednesday night after visiting Vietnam and Indonesia.

“As an Indo-Pacific nation, Japan will continue to exercise active leadership,” Suga told reporters in Jakarta on Wednesday, showing his intention to take the initiative to promote the vision of a “free and open Indo-Pacific.”

Suga then responded to a question about China’s hegemonic maritime expansion in the South China Sea. “We strongly oppose any act that increases tensions,” he said. “We are watching it with concern.”

Japan made concrete progress on the security front during the visits to Vietnam and Indonesia, including signing agreements with the two countries on promoting exports of defense equipment. Suga also indicated a policy of accelerating support for diversifying the supply chain for medical supplies and infrastructure development in those countries, which will lead to greater economic exchange.

Suga, meanwhile, did not name China and avoided criticizing the country publicly. At the press conference Wednesday, when one reporter noted that China was concerned about the security cooperation between Japan, the United States, Australia and India — a grouping known as the Quad — suspecting it to be the formation of a new “North Atlantic Treaty Organization for the Indo-Pacific region,” Suga responded that there was “absolutely no such thing.”

A senior Japanese Foreign Ministry official pointed out that Suga struck a “fine balance in his diplomatic debut between achieving substantive results and showing consideration to China.”

The Vietnamese media emphasized that Vietnam was the first country that Suga chose to visit for his diplomatic debut. The local newspapers reported in detail on Suga’s remarks and the details of the agreement reached at the summit meeting on their front pages and in spreads.

The influential Vietnamese newspaper Tuoi Tre on Monday quoted an expert whose opinion was that Suga expressed his intention to deal with the South China Sea issue by visiting Vietnam, and by embarking on strengthening ties among the Quad nations.

There were also media reports about the hopes of the local business community for the promotion of Japanese investment in the region.