Over 8,000 takeoffs and landings at Yokota Air Base in past six months 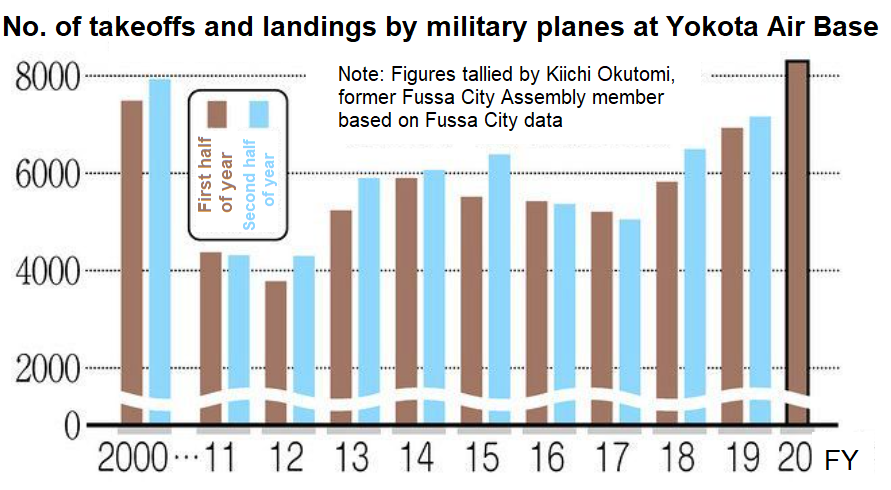 Takeoffs and landings by military aircraft at the U.S. military’s Yokota Air Base (located in Fussa City and other municipalities in Tokyo) in the April–September period numbered 8,298, the highest number ever. This is also the first time for the number to exceed 8,000 in a six-month period since fiscal 2000 [when statistics started to be compiled]. In recent years, takeoffs and landings have been rising continuously, and experts have cited the increasing intensity of the U.S. confrontation with China as a factor behind the rise.

The number of takeoffs and landings by military helicopters, including Ospreys, is also increasing. At the noise measurement point in Mizuho Town on the north side of the base, the number did not exceed 1,000 a year after fiscal 2005, but then it rose to 1,385 in fiscal 2018 and 1,047 in fiscal 2019 after the Ospreys were deployed. This fiscal year, the number rose to 1,164 in the first six months alone.

A spokesperson for Yokota Air Base refrained from commenting on the recent figures but explained that “local flights are increasing because access to other training facilities is restricted due to COVID-19 countermeasures.”

Yasuo Koshiba (74), a military intelligence analyst in Akishima City, said, “With the United States beefing up its stance on China, functions have been divided up among the various U.S. military bases in Japan. Yokota Air Base has traditionally mainly operated only transport aircraft, but now fighters and other aircraft fly in from other bases.”

Mieko Takahashi (78), representative of the Nishitama Association for the Removal of Yokota Air Base, said, “Exercises are intensifying not only at Yokota but at the other bases as well. I want people to know the actual situation.”