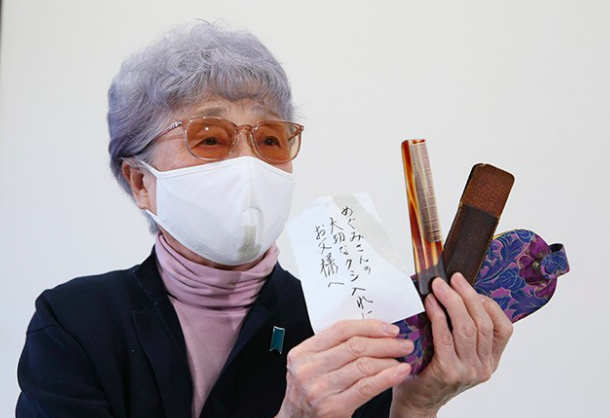 Sakie Yokota shows a comb her daughter, Megumi, gave to her husband as a birthday present the day before she was abducted by North Korea in 1977 at a news conference in Kawasaki on Nov. 13. (Pool)

KAWASAKI–Sakie Yokota made an impassioned plea for Japanese government officials to bring her daughter home before the 43rd anniversary of her abduction by North Korean agents was marked.

“Why hasn’t the government been able to resolve the abduction issue for so many years, given that North Korea is a neighboring country?” Yokota, 84, asked at a news conference here on Nov. 13. “Please have her and other abductees returned to Japan.”

At the news conference, Yokota touched on the difficulty over the years, the recent passing of her husband, Shigeru, and hopes for U.S. President-elect Joe Biden.

Yokota’s daughter, Megumi, was only 13 and a junior high school student when she was abducted on Nov. 15, 1977, in Niigata, where her family lived at the time.

Megumi became a symbol of Japanese who were abducted by North Korea in the 1970s and 1980s.

With the death of her husband in June, Yokota is now one of only two parents still living whose children are among the 12 Japanese recognized by the government as abduction victims who have yet to be returned by North Korea.

The other parent is Akihiro Arimoto, 92, who lives in Kobe. His daughter, Keiko Arimoto, was abducted in 1983.

Yokota criticized the fact that no progress has been made on the abduction issue in recent years, calling it “abnormal.”

“My husband had worked so hard for the abduction issue, but we could not see our daughter even once,” she said. “It feels so helpless.”

In addition to the poignant anniversary, Nov. 14 would have been Shigeru’s 88th birthday. Yokota said her husband always carried a comb Megumi gave him as a birthday present the day before she was abducted. The comb is now kept in a drawer Shigeru used to use, she added.

Showing the comb at the news conference, Yokota said, “I keep it with great care to show it to Megumi some day.”

Yokota expressed her hopes for Biden to work with the Japanese government to resolve the longstanding issue after he takes office in January.

Asked if she had a message for her daughter, Yokota said, “Please stay healthy. I will take care of myself, too.”