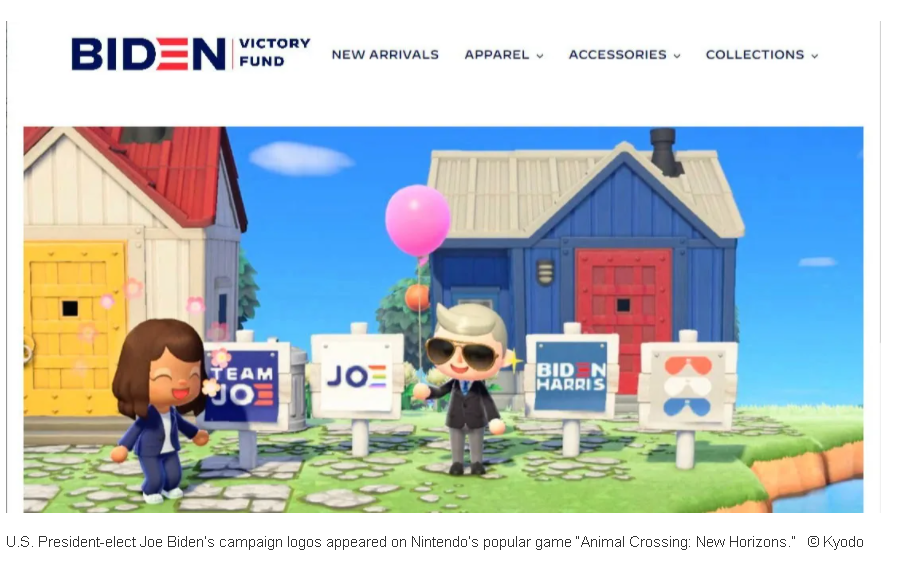 OSAKA — Game maker Nintendo has drawn up universal terms of use to dissuade companies and organizations from using its popular title Animal Crossing: New Horizons for marketing and political activities.

Local units of gaming companies usually stipulate terms of use for their games in the U.S. and Europe. This is the first universal rule for a game software developer.

The move comes in response to the unauthorized use of Animal Crossing in election campaigns. The new terms of use call on companies to refrain from directing users of the game to outside shopping sites, or conducting marketing activities using the game, including distribution of coupons.

U.S. Democratic presidential candidate Joe Biden’s campaign used Animal Crossing to promote the former vice president’s drive for the White House. The Biden camp published four logo designs for to use in the game on virtual yard signs and T-shirts to appeal to supporters.

In Japan, supporters of the Liberal Democratic Party’s former secretary-general, Shigeru Ishiba also considered placing his avatar in the game during his campaign to lead the party in September. But they decided to drop the idea after some supporters voiced concern that doing so might violate the game’s terms of use.

Previously, Animal Crossing’s terms of use prohibited the use for political purposes only by Japanese. Nintendo has now extended the scope to other countries, including the U.S.