TOKYO — Both approval rating of Japanese Prime Minister Yoshihide Suga’s Cabinet and favorability toward U.S. President Donald Trump’s reelection are higher among Japan’s young generation than with older groups, an analysis into a nationwide opinion poll conducted by the Mainichi Shimbun and a polling firm on Nov. 7 has found. 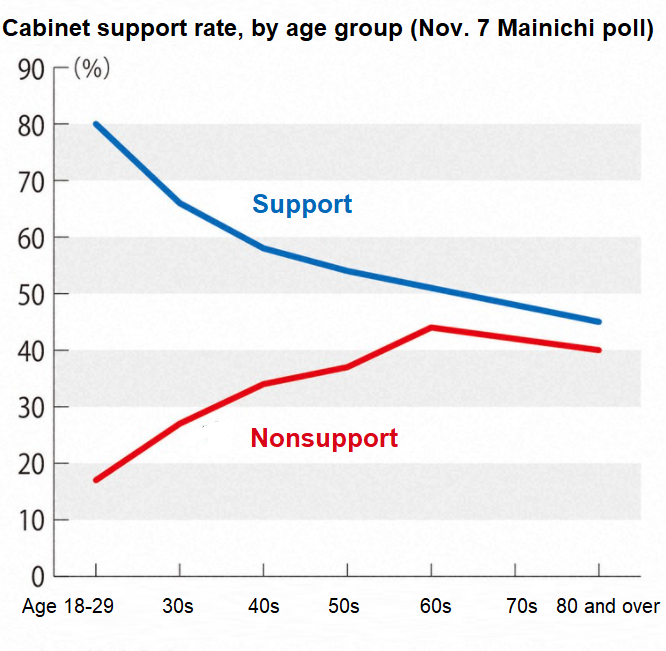 The Nov. 7 joint opinion poll conducted by the Mainichi Shimbun and polling firm Social Survey Research Center showed that while the current Cabinet’s overall approval rating was 57%, the numbers by age group told a different story. In all, rates of approval ran at 80% among respondents aged between 18 and 29, 66% of those in their 30s, 58% of people in their 40s, 54% among individuals in their 50s, 51% in their 60s, 48% of those in their 70s, and at 45% for people aged 80 or above. Although a tendency for approval ratings to fall among older people compared to the young and the middle-aged was also present during the previous administration of Prime Minister Shinzo Abe, that trend was more apparent in the recent poll results. 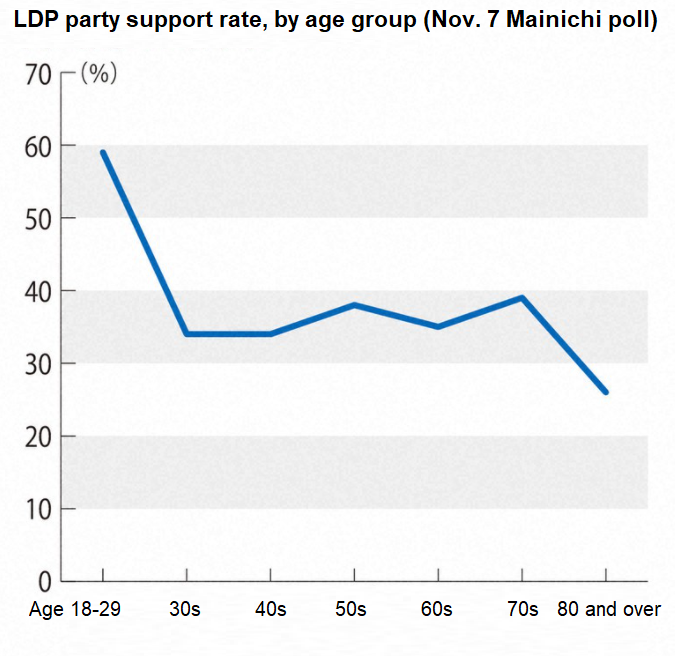 Suga’s Liberal Democratic Party’s (LDP) approval rating was 37% — the highest for any political party. When viewed by age group, the LDP approval rating was a remarkably high 59% among 18–29-year-olds. Around 30% of people between their 30s and 70s indicated approval of the LDP, with rates falling to about 20% of those aged 80 or more. 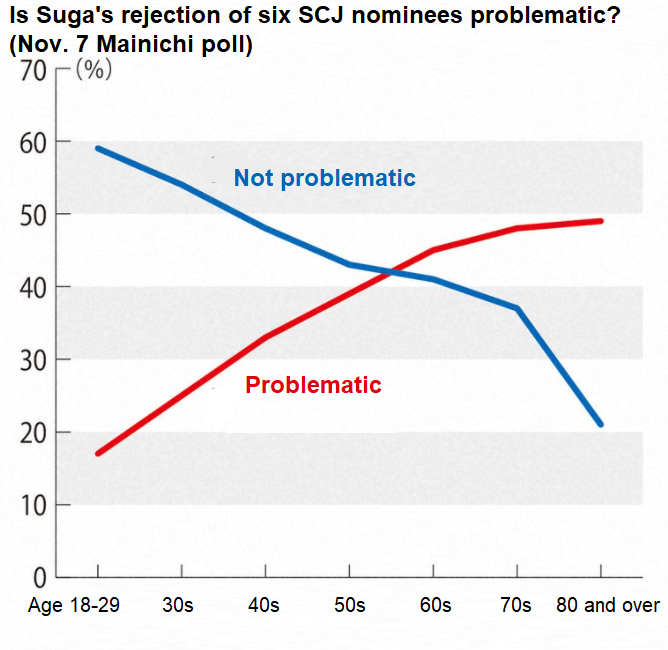 Masao Matsumoto, the president of the Social Survey Research Center and a professor at Saitama University specializing in political awareness, said that until the latter half of the 1980s, the LDP’s approval rating was lower among the younger generation, and graphs showed a steadily rising curve; the exact opposite of the shape they take today.

Concerning the recent poll results, Matsumoto commented, “It reflects the younger generation’s tendency to orient toward maintaining the status quo, where they don’t want to change or for present circumstances to change. Rather than being ‘conservative,’ they should be called ‘self-protective,’ and in terms of politics they may be on a different part of the spectrum to conservatism.” 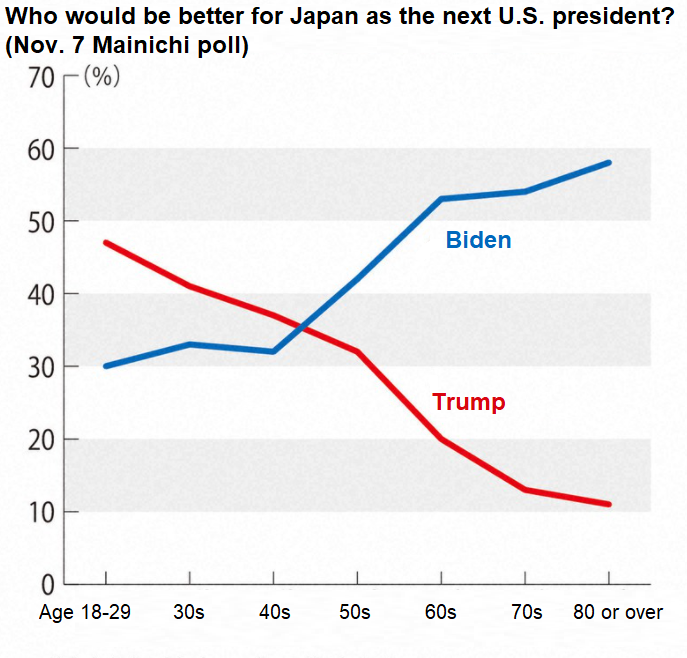 As for the high support level for Trump among the younger Japanese population, the survey was conducted before the general outcome of the U.S. presidential election had become apparent. A question in the poll asked respondents to choose between Republican candidate President Trump and Democratic candidate and former Vice President Joe Biden — now the president-elect — in terms of whose victory would be more favorable for Japan.

Forty-two percent of all respondents chose Biden as the preferred candidate, exceeding the 29% in favor of Trump. But among age groups up to those in their 40s, more people selected Trump as the candidate they support. More specifically, 47% of individuals aged between 18 and 29, 41% of people in their 30s, and 37% in their 40s chose Trump. Groups in their 50s and above recorded more support for Biden. On the other hand, young people in the United States tend to show greater support for Biden over Trump, according to major U.S. news outlets.

Shintaro Nakanishi, a sociology professor at Kanto Gakuin University who has published research on a conservative shift among young people, commented, “Awareness surveys show that a majority of the young generation do not hold bright outlooks for the future of Japanese society. Society at present has a large wealth gap, and is difficult to live in. Young people prefer keeping things the way they are despite this, as they don’t want matters to grow worse.”

According to the professor, Japan’s younger generations tend to value rules and order, which they reportedly think protect their current lives and stop them from getting worse. “There is a shared notion that the Suga Cabinet and LDP control current rules and order. The young generation’s support for the administration and LDP may come merely from the impression that the groups moving politics are the Suga Cabinet and the LDP,” he said.

Momoko Nojo, 22, representative of No Youth No Japan, an organization that calls on teenagers and people in their 20s to engage in society and politics through Instagram, said that she didn’t doubt that those in her age group showed high approval for the Cabinet and the LDP. She commented, “Young people choose the LDP because they think they can’t expect much from other political parties. If it can’t be Suga, they can’t come up with anyone worth supporting, so they end up thinking, ‘It’s fine to leave things the way they are.’ I think it’s a passive form of support, rather than an active one.”

Nojo thinks that it’s more difficult for young people like herself to choose disapproval over support. She explained, “A proper reason is needed to say ‘No;’ this is not limited to politics. When it comes to our attitudes toward the Cabinet too, our stance generally begins with a ‘Yes.’ The ‘No’ option arises for the first time when something absolutely intolerable happens.”

Feelings of entrapment also seem to exist among young people living amid an aging population and growing economic disparities. “There has never been a point in our lives when society was looking up. We have the impression that matters will be even worse 20 years from now. Young people have less hope for politics compared to other generations,” said Nojo.

It may be the case that some young people choose to consciously avoid being against the government, as they rarely feel betrayed when their expectations are already set so low. In any case, despite the high approval rates, it does not seem that young people in Japan currently have much hope for politics. [Line graphs added by JMH based on Mainichi data.]