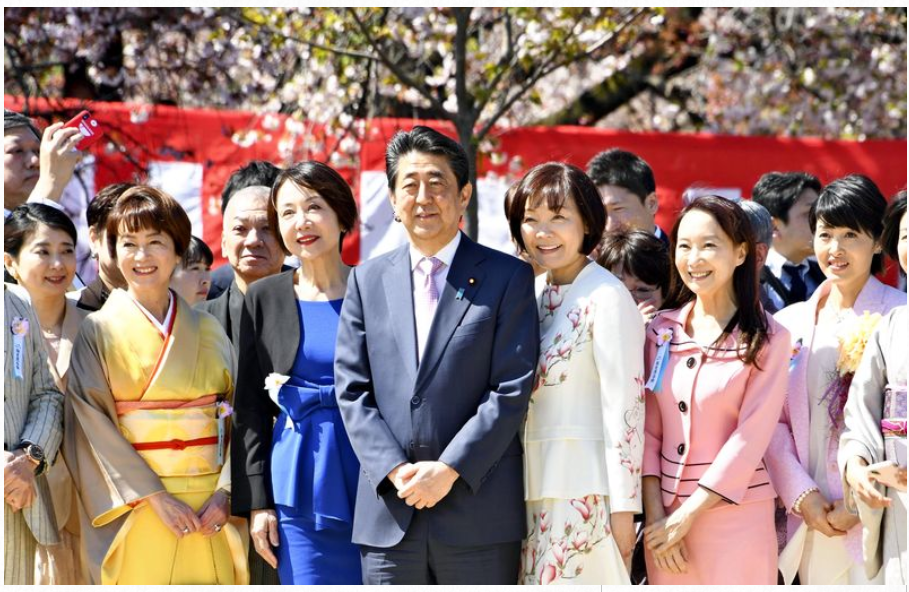 Yomiuri Shimbun file photo / Then Prime Minister Shinzo Abe, center, and guests pose for a photo during a cherry blossom-viewing party hosted by him in Shinjuku Ward, Tokyo, in April 2019.

The chief public secretary of former Prime Minister Shinzo Abe was among at least 20 people who voluntarily submitted to questioning by Tokyo prosecutors over criminal complaints filed regarding a dinner hosted by an Abe-related group on the eve of a cherry blossom-viewing party, it has been learned.

The special investigation squad of the Tokyo District Public Prosecutors Office suspects that because the total amount paid to the hotel where the dinner was held exceeded the amount of fees collected from attendees, the difference may have been covered by the Abe side. The prosecutors are looking into whether they can build a case for offenses including violation of the Political Funds Control Law.

The dinner was hosted by a political support group for Abe based in Shimonoseki, Yamaguchi Prefecture, which is his constituency. Abe’s state-funded first secretary serves as the head of the group.

The annual dinners were held from 2013 to 2019 at Tokyo hotels on the eve of the cherry blossom-viewing parties, with Abe inviting notable figures from the political, financial and cultural worlds. Abe’s supporters coming from Yamaguchi Prefecture and others paid ¥5,000 each to attend the dinners, which included food and drinks. In 2019, more than 700 people were in attendance.

Starting at the extraordinary Diet session last year, the opposition parties have continued to point out that the fees were excessively low and question whether the difference had been covered by the Abe side.

In response, Abe asserts that the ¥5,000 fee was set by the hotel, and that his office staff turned over all money collected by his office staff to the hotel. “There was absolutely no income or disbursement by the support group, so it is not necessary to include it on the political funding report,” the former prime minister countered, adding, “There is no truth to the claim that the office covered [the difference].”

Prosecutors have so far questioned at least 20 people, including Abe’s personal aide and local supporters, on a voluntary basis. The prosecutors are pursuing an investigation into the financial records and other documents from the Abe side, and bills and other statements from the hotel. According to a source, the fees collected from the attendees alone were not sufficient to cover the total cost of the food and drinks at the dinner.

A civic group and legal professionals have filed complaints regarding the dinner on suspicion of violating the Political Funds Control Law and the Public Offices Election Law.