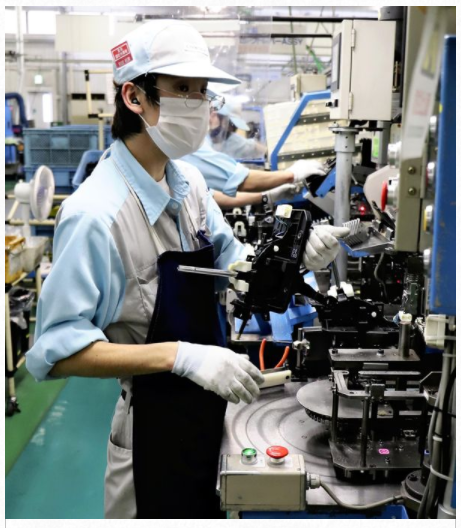 “It feels like I’m going through a long, dark tunnel,” said the head of an auto parts maker in Ota, Gunma Prefecture.

Orders fell 30% at his company, forcing him to take out loans totaling about ¥100 million. His business was hit by the novel coronavirus pandemic not long after he had finally paid off a ¥30 million loan he took out in the wake of the collapse of U.S. investment bank Lehman Brothers. He said the company would not hire new graduates next spring.

According to the Economy, Trade and Industry Ministry’s Monthly Report of Current Production Statistics for September, auto parts sales decreased by 1.5% compared to the same month a year earlier. However, it seems as if the business performance of parts makers is going to improve ***faster*** than expected as new vehicle sales are on an upward trend.

But this trend does not affect small and midsize parts makers. When a company of that size is hit by a financial crisis, it is difficult to recover from the blow. More than a few companies will be forced to cut jobs before their earnings begin to recover.

As of Thursday, at least 10 auto parts makers have offered voluntary retirement, looking to cut 2,500 employees in total, according to Tokyo Shoko Research Ltd. At Mitsuba Corp. based in Kiryu, Gunma Prefecture, about 550 employees, including those of its group companies, chose voluntary retirement as the company’s earnings have been falling since before the pandemic.

“Many parts manufacturers were already close to the edge [before the pandemic], but now with the coronavirus, many have been pushed off,” said Koichi Sugimoto, senior analyst at Mitsubishi UFJ Morgan Stanley Securities Co.

The automobile industry has a large base. About 700,000 employees are involved in manufacturing auto parts nationwide, according to Japan Automobile Manufacturers Association Inc. and other sources. The loss of jobs at auto parts makers will inevitably have a negative impact on personal consumption and a considerable effect on the country’s overall economic recovery.

Sanden Holdings Co., based in Isesaki, Gunma Prefecture, applied for alternative dispute resolution (ADR) procedures for business revitalization, a type of private restructuring, in late June and is currently discussing ways to rehabilitate its operations with financial institutions. Sanden is a major employer for the prefecture with 7,000 employees.

Takayuki Soga, chairman of the Federation of Gunma Prefectural Chambers of Commerce and Industry, said area businesses are “concerned about the impact on the local economy.”

Hiruta Kogyo Co. in Kasaoka, Okayama Prefecture, has had to lay off about 120 employees, about 10% of its workforce, and also reduced the number of interns abroad.

“I want to believe that demand will return in a few years,” said company Chairman Shinzo Hiruta.

Parts manufacturers are under pressure to fight a war on two fronts: They have to face the transition to electric vehicles and deal with ongoing cost reductions.

Musashi Seimitsu Industry Co., based in Toyohashi, Aichi Prefecture, aims to increase the production ratio of EV parts, such as gears, from the current 10% to 25% in a few years.

“We pour our management resources [into manufacturing parts for EVs] and will take a leading role in the new era,” President Hiroshi Otsuka said.